In Italian cooking, the term refers to a sauce, usually based on vinegar and sugar, with wine added, and often onions. It can be very chunky and so full of ingredients it almost appears to be a relish; or it can be a thin sauce. In fact, the most traditional version of it is just a thin sauce of vinegar, wine and sugar. This traditional version is similar to a gastrique in French cooking.

The vinegar used is usually a wine vinegar. Only rarely will a recipe call for something as extravagant as balsamic vinegar, as balsamic is usually reserved as a table condiment.

Agrodolce sauce is used to cook other ingredients in, and is usually part of an overall recipe, or it is added to other reductions such as pan juices to make a pan sauce.

Butter, dried or candied fruits, lemon, raisins, nuts, olives, etc may be added to the sauce.

The use of an agrodolce is particularly popular in Sicilian cooking.

You may sometimes see it spelled “agrodulce”, depending on the region of Italy being reflected in the product. 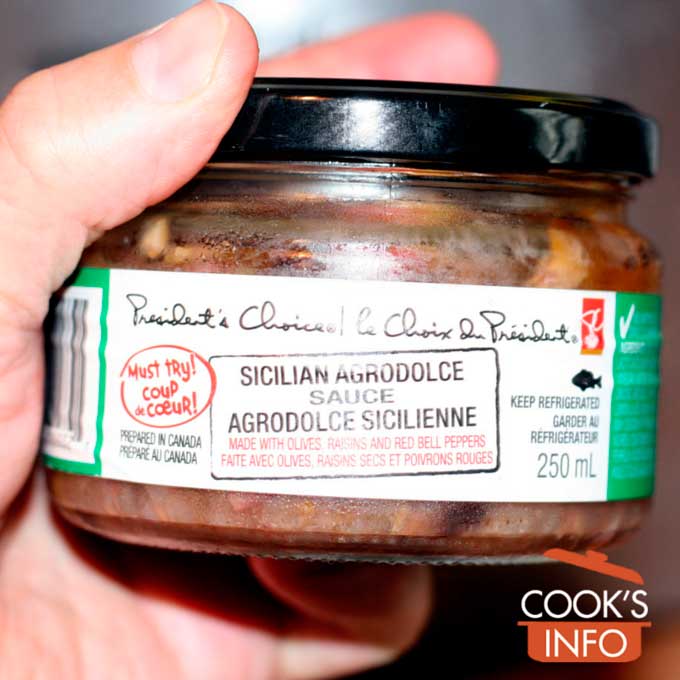 You can buy agrodolce in bottles, both thin and thick versions. The thin versions can be good for simmering meats and fish in to cook them. Versions that are thick like a relish can be spooned on top of meats and fish at serving time.

Put wine and vinegar together in a non-reactive pan, simmer until reduced to two-thirds of the original volume. Add sugar, stir a few minutes to dissolve completely; remove from heat.

Agrodolce is usually said to have been brought to Italy through Sicily by Arabs.

It would be more accurate to credit the Arabs with reinforcing the taste for sweet-sour in Sicily so that it didn’t fade as much as it did in the rest of Italy, because the concept and taste of sweet and sour was of course already in Italy well before that, under the Romans and in the Middle Ages.

The Romans, like the Chinese and like medieval Europe, didn’t divide sweet from savoury in their cooking. The Romans would have used fruit, honey, condensed wine syrups, etc as the sweetener instead of sugar.

This web site generates income from affiliated links and ads at no cost to you to fund continued research · Information on this site is Copyright © 2022· Feel free to cite correctly, but copying whole pages for your website is content theft and will be DCMA'd.
Tagged With: Italian Sauces, Sweet-and-Sour