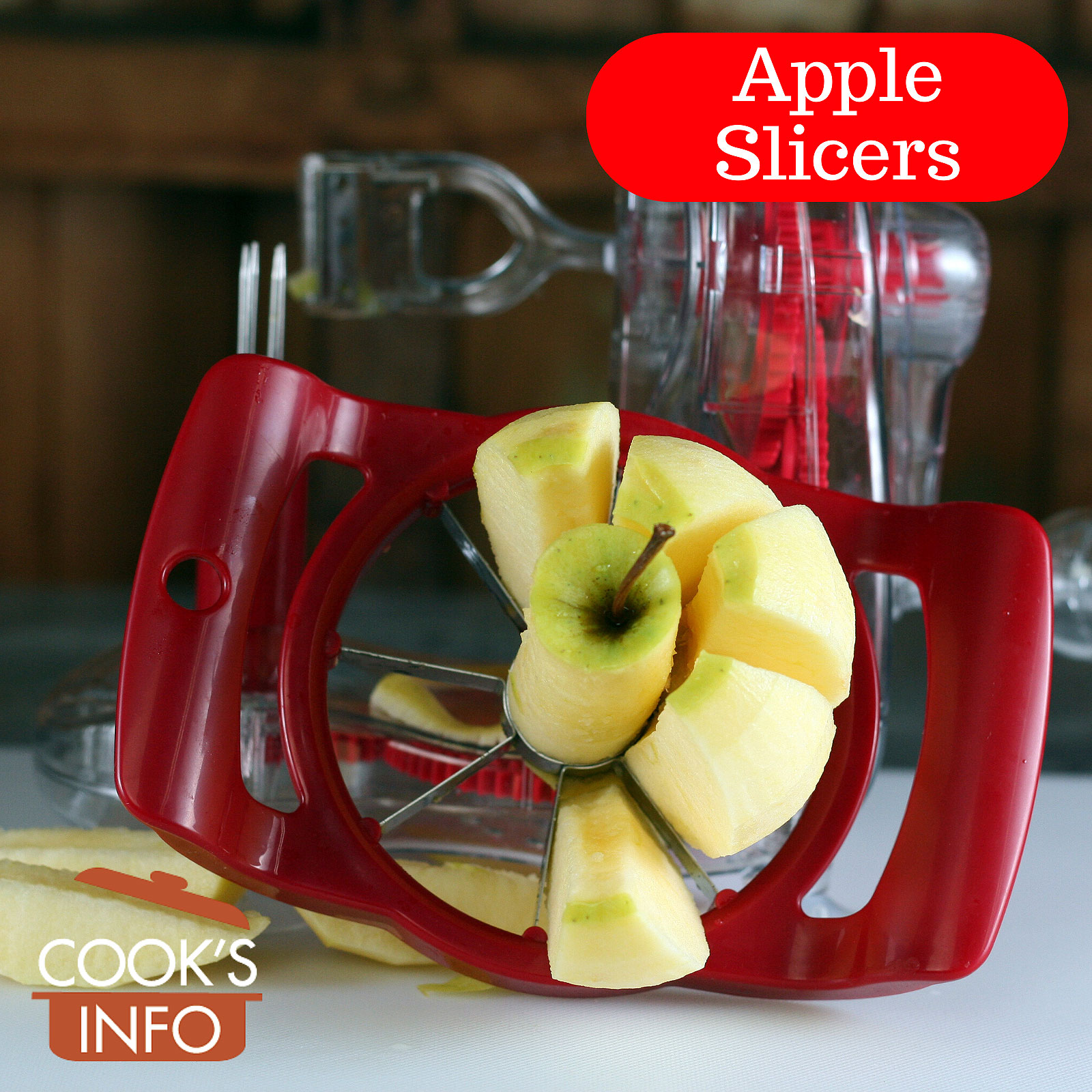 An apple slicer is a device designed to both core and slices apples. There are simple hand ones that work by dint of brute force, and machines that work through hand cranking.

The simple ones look like a wheel with spokes. They are a large round metal ring, divided into sections by metal blades, converging on a smaller, centre ring. The smaller centre ring is meant to tackle the core. The sections (often 8, but there’s no hard and fast rule) are meant to produce wedges of apple. On each side of the ring are handles used to press down with.

You can peel the apple before starting, or not. You set the apple upright on a cutting board, line the smaller, centre ring up with the centre of the apple, and press down hard.

You can use also use these simple ones on potatoes to make potato wedges. 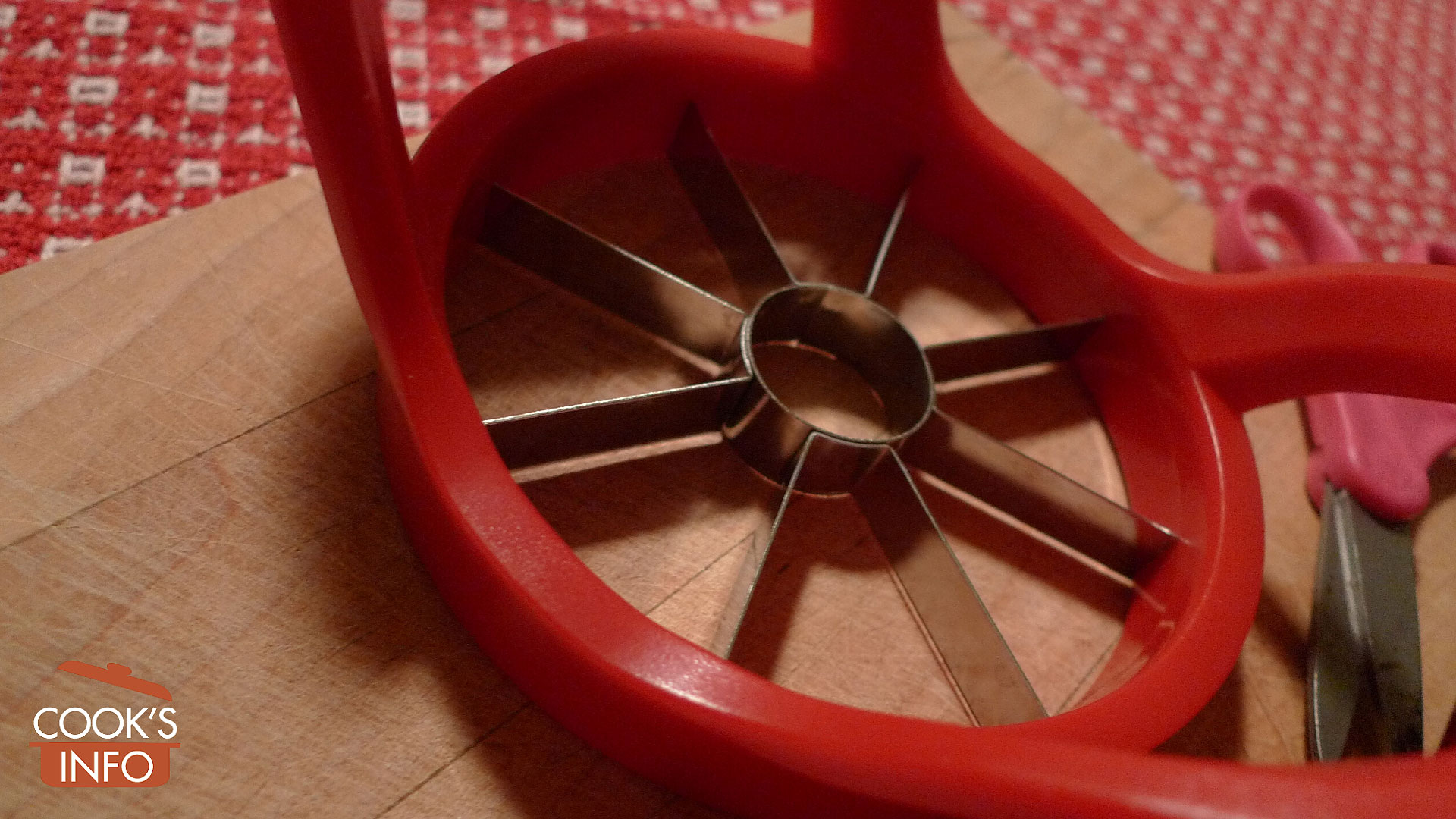 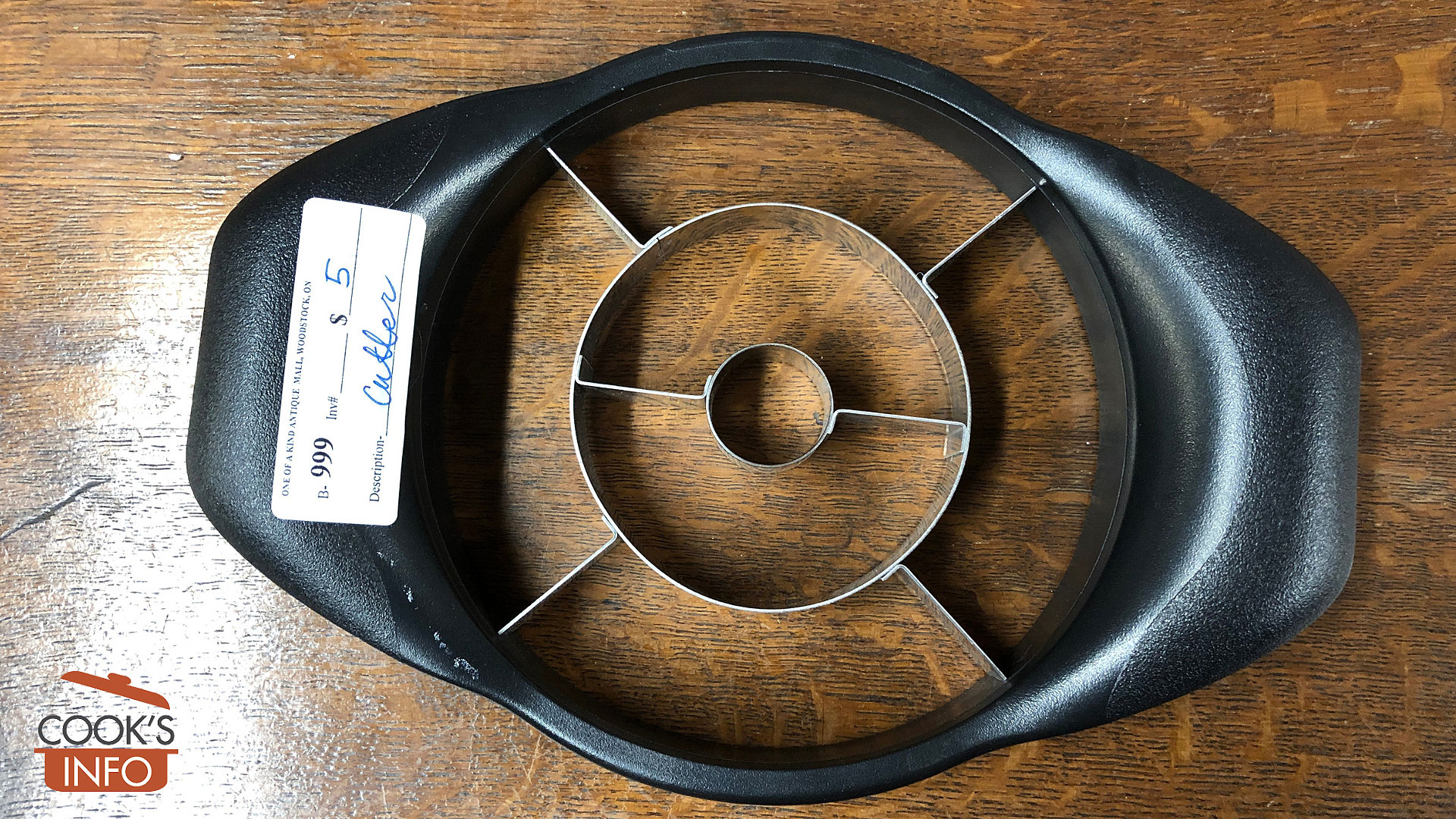 Apple slicer with 6 larger sections instead of 8 smaller ones. © CooksInfo / 2020

The machine ones have a suction base or a clamp to grip work surface with. The clamp-on ones often require some sort of “overhang” on your work surfaces. At one end of the machine, you have a fork that you skewer the apples on, putting the tines through the centre of the apple. Then you swing the attached peeling blade into place, just touching the skin of the apple. You turn the hand crank at the end other, which turns the apple against the blade, peeling, coring and slicing it all at once. These machines are very efficient at processing large quantities of apples. Some models allow you to take the slicer knife off so you can just peel and core, then slice on your own as desired. It will make very thin slices; you can also attach a potato to it for scalloped or dauphin potato dishes. The uniform slices are also ideal those who dry apple slices in a dehydrator.

The machine types work best with apples that are perfectly and uniformly shaped.

Whether you peel the apple or not first, always wash it, because surface contamination will be pushed down through the flesh of the apple with the blade.

Afterwards,with either type of device you may need to trim to slice off the slices any bits of the core that survived or any of the tougher husk-like cavities that encased the seeds. 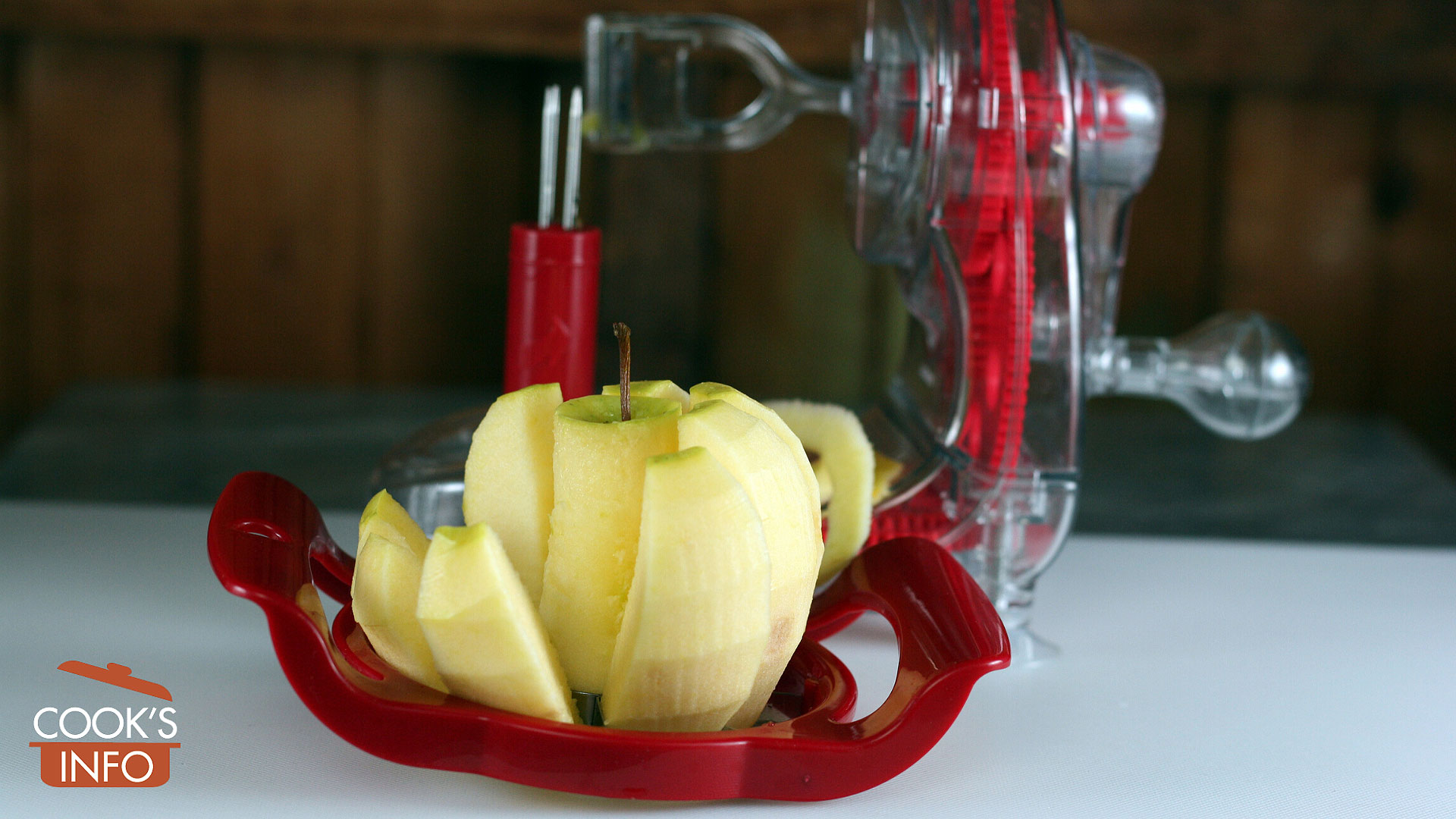 Emma Kay, author of Vintage Kitchenalia, notes that it was the emergence of cast-iron gears that led to mechanized tools in the kitchen, and one of the first most popular ones were those to peel apples:

“Cast-iron gears emerged in the mid-nineteenth century and the race began to develop the most advanced parer – a convenient device to peel, trim, core and cut fruit – in particular apples, which were such a popular and abundant fruit in both America and Britain. America pipped Britain to the post (pardon the pun) because the development of this first mass-market kitchen aid was made in 1803, by Moses Coates. Once the technology was established, the basic fundamentals of the apple parer swiftly led to the invention of a whole host of useful cutting objects, such as the bean slicer, asparagus buncher and cutter, marmalade slicer and many more…” [1]Kay, Emma. Vintage Kitchenalia. Gloucestershire, England: Amberley Publishing. 2017. Google Ebook edition.

This web site generates income from affiliated links and ads at no cost to you to fund continued research · Information on this site is Copyright © 2023· Feel free to cite correctly, but copying whole pages for your website is content theft and will be DCMA'd.
Tagged With: Apples, Slicers