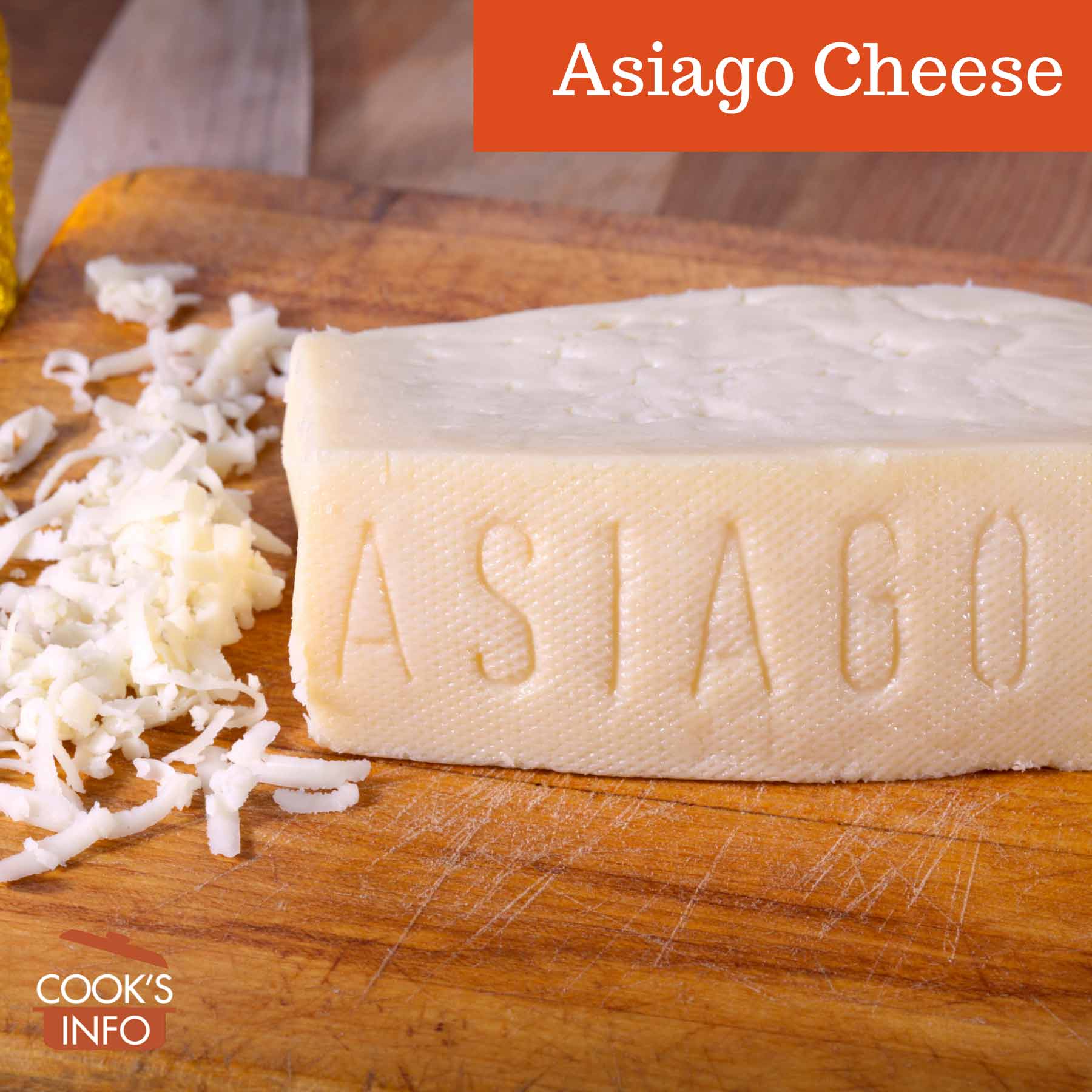 Asiago cheese, a specialty of the Italian regions of Vicenza, Pavova, Treviso and Trento, is made from cow’s milk.

Asiago d’Allevo, the traditional version of Asiago cheese, is a hard, sharp cheese with very fine holes, used as a grating cheese.

It is is a sweet curd, semi-cooked, unpasteurized cheese. Both the cheese and the rind are pale yellow; the flavour is somewhere in between that of parmesan and aged cheddar.

60% of the milk used comes from Friesian cows; 40% from a cow breed called in Italy “bruno-alpine” (“brown alpine.”) The milk is allowed to stand for 6 to 12 hours, so that the cream rises naturally to the top where it can be skimmed off for other uses. Sometimes, though increasingly rarely, milk is used from two different milkings, though if it is, only one of the batches of milk will have the cream skimmed off it. The milk is then heated to 37 C (99 F), and calf’s rennet is added to curdle the milk. The curds are then stirred, then reheated, then put into canvas-lined, cylinder-shaped wooden moulds to rest for 3 days, during which time they are turned frequently to help them dry (nowadays, plastic is used mostly to line the moulds instead of canvas.) The cheese is then taken out of the mould, and salted on both sides, first with brine, and then with coarse salt. The cheese is then aged from 6 months to two years. While aging, the rind is scraped and oiled several times.

Production is controlled by “Consorzio per la tutela del Formaggio Asiago” (the “Consortium for the Protection / Care of Asiago”), formed in 1979. Each cheese is stamped with the Consorzio’s emblem and a number assigned to the dairy that made it.

This aged version can be grated and used as you would Parmesan. 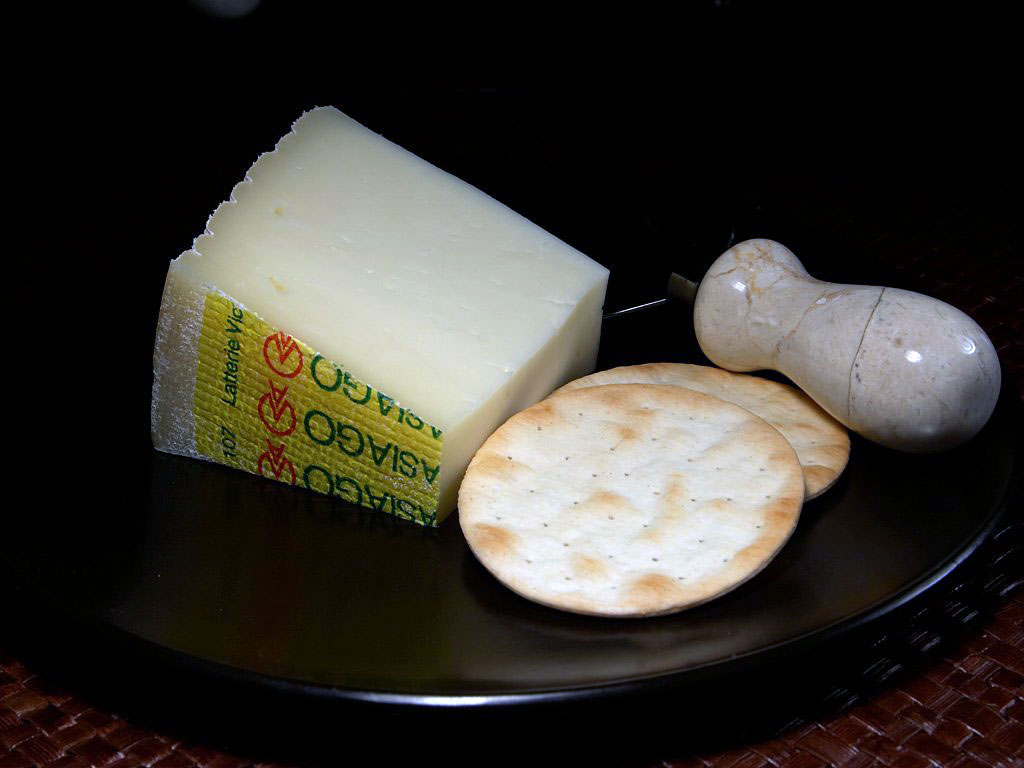 Asiago Pressato is a “new” version (dating from the 1920s) of Asiago created in response to market demand for a fresh cheese; it now outsells the aged version in Italy by more than 3 times. 75% of the Asiago cheeses produced are “pressato” (meaning “pressed”). It is made industrially for the most part, and is inexpensive compared to the other Asiago cheeses.

It is a semi-firm, mild, fresh cheese with larger holes than in the aged version. It is made from whole pasteurized cow’s milk curdled with calf’s rennet. The curds are cooked, then moulded, and aged for 20 to 30 days. The rounds of cheese are between 30 and 40 cm (12 and 16 inches) in width, and will weigh from 11 to 15 kg (24 to 33 pounds).

The cheeses have hardly any rind, and a mild taste. The fat content is 48%.

Asiago Pressato started to be sold in the United States around 2003.

Use the pressato version as you would a white cheddar: served in slices on fresh or grilled sandwiches, in cubes as a snacking cheese, or grated as an ingredient in cooking. Melts well.

Store Asiago refrigerated, wrapped in waxed or parchment paper, and then in a loosely closed or perforated plastic bag to allow the cheese to breathe.

Asiago was first made on the plateau of Asiago, then it spread to other places in the Veneto, as well as to Trento, Padova and Treviso.

Before the 1600s, sheep’s milk was used, making it a “pecorino” cheese (pronounced “pegorin” in the local dialect.) In the 1600s, the practice of raising cows reached the plateau. The cheesemakers made the switch to cow’s milk when it became available because their customers in the towns and cities would pay a higher price for cow’s milk products than they would for sheep or goat’s milk products.

The “pressato” variety was developed in the 1920s.

Asiago cheese is named after the village of Asiago, Vicenza in Italy.

“Di allevo” means “raised”, as in “brought up and cared for.”

This web site generates income from affiliated links and ads at no cost to you to fund continued research · Information on this site is Copyright © 2022· Feel free to cite correctly, but copying whole pages for your website is content theft and will be DCMA'd.
Tagged With: Denominazione di Origine Controllata, Italian Cheeses, Semi-Firm Cheeses, Sweet Curd Cheeses