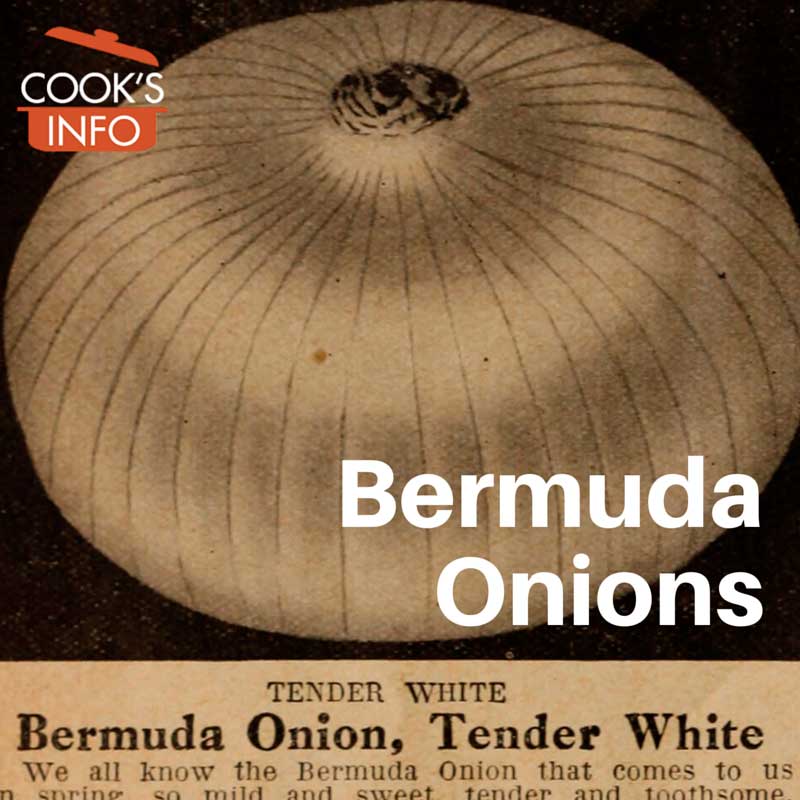 Contents hide
There is some confusion about what Bermuda Onions are.

They are not red onions, or Spanish onions.

They are flat-topped, sweet onions which can have white or yellow skin. Varieties include Yellow Bermuda, White Bermuda and Crystal Wax.

From seed to harvest, Bermudas will produce a “spring onion” in 30 days; a fully-mature onion in 95 days. They need a minimum of 8 hours of sunlight a day for bulb formation.

At the turn of the 1900s, they were very popular and considered a very good variety. Now, though, producers don’t like these onions because the yields are lower than with Grano or Granex type onions.

Consequently, Bermuda Onions are not really available anymore in stores or markets, but seed is still kept for breeding purposes, and home gardeners can grow them.

They are also still a patriotic favourite on the island of Bermuda.

The seed for Bermuda Onions was brought over to Bermuda from the Canary Islands before 1888, and within a few years Bermuda got into the onion growing business. Before then, a primary business in Bermuda had been shipbuilding — the island had many cedar forests — but the shipbuilding business sank, as it were, with the advent of steel ships.

By 1890, D. Landreth & Co. in America was importing from Bermuda White Bermuda onions grown from Canary Island seed (though the company noted that the skin of the White Bermuda Onion “had quite a yellowish character”). By the beginning of the 1900s, the export of onions and Easter Lilies to the American mainland were important sources of income for the island. Islanders still refer to themselves as “onions”.

By 1898, though, Texas of all places decided they wanted a piece of the action. Seed was imported from the Canary Islands and planted near Cotulla, Texas. The onions were very popular, and by 1907, more than 1,000 train carloads of onions were shipped out of Texas; by 1917, nearly 7,000 carloads. By 1920, they had displaced Bermuda as the major supplier of the onions.

Throughout this period, though, the seed had continued to come from the Canary Islands. Owing to the greatly increased demand for the seed, Canary Island suppliers found themselves increasingly unable to provide reliable, quality seed.

In 1925, seed was brought over from Spain for Grano type onions. In 1933, the Texas Agricultural Experiment Station began to develop new cultivars from this Grano type seed. The new cultivars developed eventually displaced the Canary Island seed by 1946, and Bermuda onions faded from all but popular memory.

Ernest Hemingway reputedly loved Bermuda onions, and it was while buying them that he met the man, Gregorio Fuentes, who would inspire Hemingway’s “The Old Man and The Sea”.

This web site generates income from affiliated links and ads at no cost to you to fund continued research · Information on this site is Copyright © 2022· Feel free to cite correctly, but copying whole pages for your website is content theft and will be DCMA'd.
Tagged With: Sweet Onions