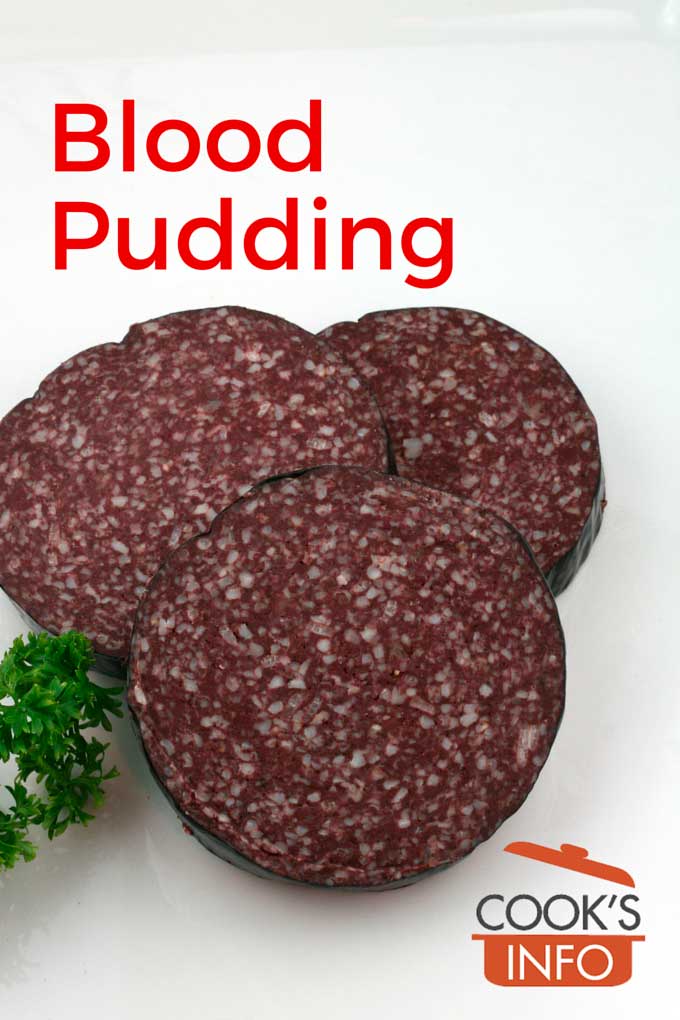 A deep purple colour, it is served reheated, usually in slices. The slices turn a much deeper purple, almost black when fried or grilled — thus another name for this, Black Pudding.

It is made from blood, pork fat, cereal (barley — groats or pearl), barley or oatmeal flour.

The barley is boiled until cooked.

While the barley is still warm, all the other ingredients except the flour are stirred in, then the blood, then the flour to thicken.

Seasonings vary by maker, but usually includes onion, salt and pepper. Some makers include cayenne pepper, mace, coriander and herbs.

The mixture is then packed in an intestine (beef intestines are preferred) and then simmered in water for 25 minutes. It cooks up to a very deep, blackish purple, with white chunks of fat in it.

The sausage is then cooled, and sold on.

They are usually served at breakfast as part of an English full breakfast.

To serve, reheat. You can simmer blood pudding, broil it (aka grill in the UK), fry or bake.

Be careful when reheating as it can crumble.

Large ones are meant to be sliced.

Despite everyone’s focus on the blood in it, nutrition-wise, the thing to watch (or close your eyes at) is the amount of fat and sodium in blood pudding.

Black Pudding was eaten by all classes in Britain, and made throughout Britain. Its popularity has lasted particularly in north-west England.

Calling it both a pudding and a sausage shows how old this sausage is, hearkening back to the days when puddings had meat in them and were cooked in casings, just like sausages, until the two took very different culinary paths.

In Episode 1.3744 (aired 29 August 1994) of Coronation Street, Fred Elliot the butcher travels as part of a delegation to Charleville, France, Weatherfield’s twin town in France. The twinning is discontinued after a row breaks out when Fred attempts to bribe the judges in a Black Pudding contest.

The World Black Pudding Throwing Championships are held in Ramsbottom, near Manchester.

This web site generates income from affiliated links and ads at no cost to you to fund continued research · Information on this site is Copyright © 2022· Feel free to cite correctly, but copying whole pages for your website is content theft and will be DCMA'd.
Tagged With: British Food, English Sausages