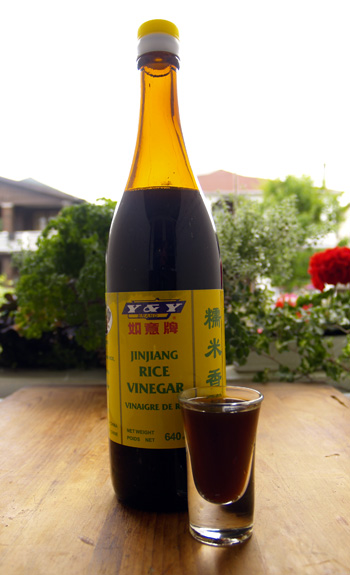 Black Rice Vinegar (aka Jinjiang) is a very dark coloured, dark brownish-red, fragrant vinegar. The most well-known versions are Chinese, but it is also made in Japan.

The vinegar is particularly popular in southern China. A well-known brand name is “Gold Plum.”

It is made from sticky (white) rice, water and salt. Some brands may add some millet, wheat, sorghum or soybeans to the rice, or use them instead of the rice. Some have so much added caramel and sugar for flavour and colour that they may be the dominant flavours.

Good ones are aged, somewhat sweet, smoky and earthy tasting. Some people feel they’ve every right to be called as complex as balsamic vinegar.

Many feel that the best ones are made in the province of Chinkiang (aka Zhejiang.)

Japanese versions of black rice vinegar may be made from rice, barley and brown rice. Made mostly in southern Japan, in Kagoshima, they are aged from 3 months to a year.

Black rice vinegar can be used as an ingredient or as a dipping condiment. It is also used in braising, in sauces and in stir-fries, and in soups such as Shark Fins Soup.

Not the same as soy sauce.

Generally quite high in sodium.