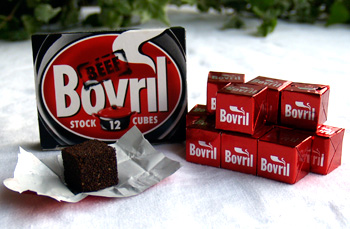 Bovril is a beef flavouring agent.

It is a thin paste, that is extremely salty tasting when eaten as is. It also comes in dry cubes.

It used to be made from 40% beef stock, but as of November 2004, it has actually been made all from yeast. This was both in response to fears at the time of “mad cow” disease, and had the advantage of making it a fully vegetarian product. Most people were able to taste the difference, however slightly: about half the people preferred the new version, half preferred the old.

Bovril can be used as a flavouring in soup. Some people spread it on bread or toast. Some people use it as a drink. You put a teaspoonful of Bovril in a mug and pour boiling water in, and stir.

In its heyday, you were told a cup of hot Bovril would cool you down on hot evenings, and warm you up on cool evenings.

Hot Bovril drinks are sold at soccer matches in the UK.

For the history of the creation of Bovril, see the biography of John Lawson Johnston here on cooksinfo.com .

Derived from the Latin name for “ox”, which is “bos.” “Vril” means “energy fluid”. It’s a word (“vrilya”) created by the 19th novelist Edward Bulwer-Lytton in his novel, “The Coming Race.”

Wine tasters use the expression “bovril nose” or “bovril on the nose” as part of their vocabulary.