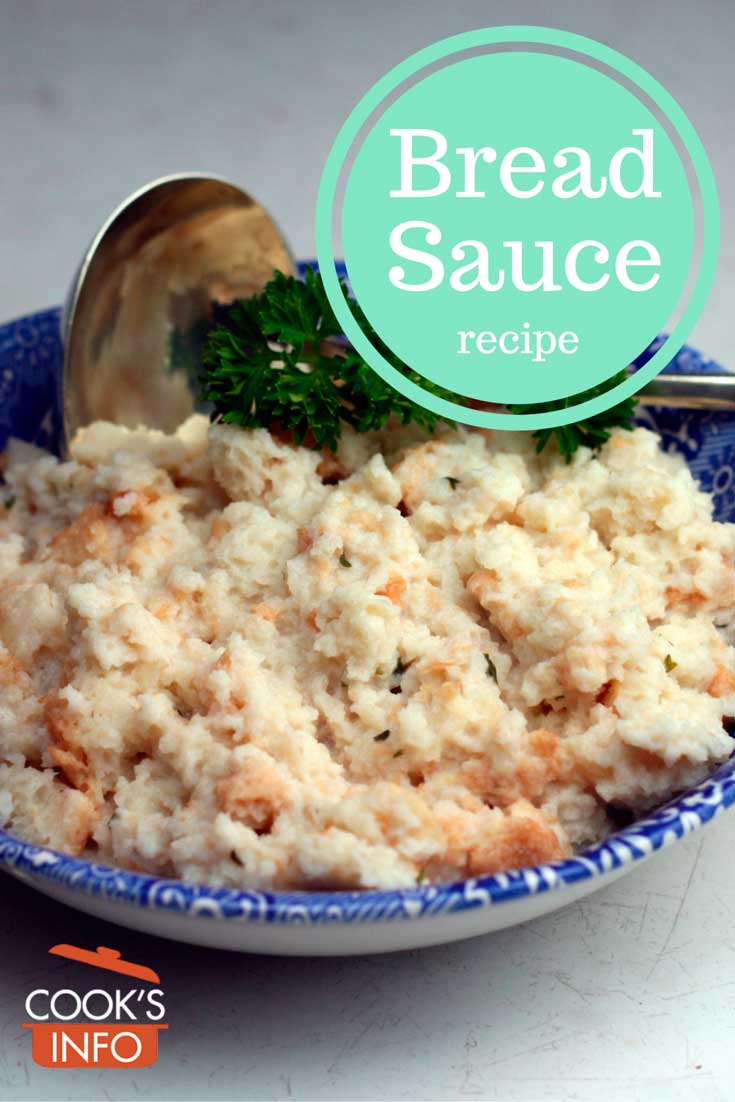 CooksInfo
For Thanksgiving or Christmas (or anytime), consider reviving an old tradition which has just about vanished completely -- bread sauce. Bread sauce was always a classic accompaniment to pork or chicken. In fact, in past times when poultry dinners were on the table people would have looked forward to both bread stuffing and bread sauce on the table, and felt cheated if both weren't. Bread sauce is considered one of the typical "trimmings" for Christmas lunch in the UK (though some might argue that it's not "core" but "second-tier", along with chipotlas, cauliflower cheese, Yorkshires, etc. [1] Bread sauce can be a thin, pouring sauce, or a thick, spooning sauce that like bread stuffing, is basically a very flavourful, filling "mush" based on bread. This recipe is for the thick version. It's a great cheat if you don't have time to make extra stuffing or any at all, as it's actually very little work. And at only 1 Weight Watchers PointsPlus® per 4 tablespoons (60 g), it makes a great, guilt-free, tasty little extra on the side of a plate.
Print Recipe
Prep Time 5 mins
Cook Time 30 mins
Total Time 35 mins
Course Bread, Sauces
Servings 6 - 8

For the bread, use about 3 slices (75 g) of fresh bread, torn into small pieces. How much bread you actually need will depend on how old is. If it's quite fresh, you may need another slice; if it's stale, you should be fine. You want all the milk to be taken up by the bread. To make stale bread, just set out a first slices overnight first. The photo shows the quantity this makes. To double or triple the recipe, just double or triple the milk and the bread only -- no need to increase the seasonings. The flavour is actually very delicate and subtle despite what seems like a lot of seasonings. You can make ahead a day or two; store in sealed container in fridge and reheat in microwave when it's time to use. Bread sauce recipes date back to medieval times, if not more. Signs of the age of this sauce are bread being used as a thickener, as well as the use of cloves in a non-dessert dish. [1] Arthurs, Deborah. Battle of the cut-price Christmas dinners. London: Daily Mail. 2 December 2013.
Tried this recipe?Let us know how it was!

There are 7 Weight Watchers PointsPlus® in total in the recipe. We costed in 3 points for 1 cup (250 ml) of 2% milk; 4 points for 3 slices of calorie-reduced bread.

1 or 2% milk is fine in this recipe, no need for anything richer.