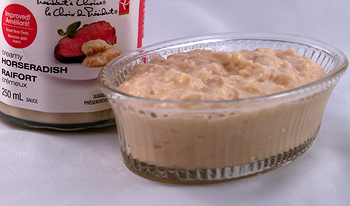 To make creamed horseradish, grated Horseradish is mixed with a double-cream, white sauce or mayonnaise, or any combination of the three. If mayonnaise is used, the ratio of Horseradish used is much higher than that for Horseradish Mayonnaise. In North America, sour cream can be substituted for the double-cream.

Mix the mustard into the cream. Stir in the horseradish, then the vinegar, and chill. For the extra-thick double-cream, you can substitute crème fraîche, Greek yoghurt, sour cream, whipping cream. Whip first if using double-cream or whipping cream to thicken it.

Made from white sauce:
Make 1 cup (8 oz / 250 ml) of white sauce, medium-thickness. While still warm, stir in some butter, a teaspoon of prepared mustard, and grated fresh horseradish. Try anywhere from 2 to 4 tablespoons of grated horseradish, depending on how hot you like it.