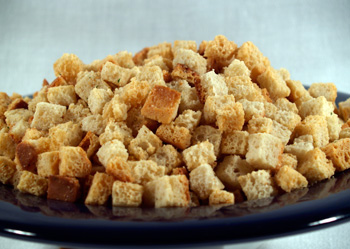 Croûtons are small, seasoned, crisp cubes of bread, used typically as a garnish for soups or salads. Some people like eating them as snacks out of hand.

They are made from unsweetened, leavened bread, with or without crust the crust left on. They are generally made from stale or leftover bread, otherwise can soak up too much butter or oil during the cooking process. The bread is usually cubed, but can also be cut into fancy shapes, such as round or heart-shaped.

To make Croûtons, the bread is cubed and fried (or baked) until crisp and lightly browned, then drained, cooled and stored (or used right away.)

Commercial Croûtons come in many flavours; you can even buy gluten-free and organic ones

Cube bread, spread out on baking sheet. Spray lightly with a cooking spray. Put bread cube in a bag with seasonings of your choice, shake till evenly coated. Spread evenly back out on baking sheet. Bake at 250 to 300 F (120 to 150 C) until desired crispness. Let cool, package and store at room temperature.

Croûtons provided a way to store leavened bread for a long while, in a way that it would still be useful after.

The Oxford English Dictionary dates the usage of the word “Crouton” in English to 1806.

This web site generates income from affiliated links and ads at no cost to you to fund continued research · Information on this site is Copyright © 2022· Feel free to cite correctly, but copying whole pages for your website is content theft and will be DCMA'd.
Tagged With: Dried Breads