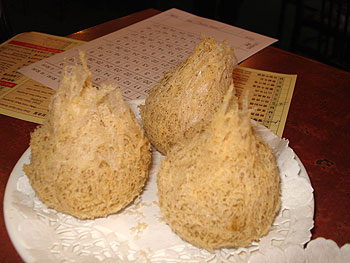 Though taro root is cheap, they cost a bit at restaurants because of the work involved.

To make them, you peel and shred the taro, and let the strands stand to drain. You then season the shredded taro (salt, spices such as five-spice powder, etc) and mix with some glutinous rice powder and corn starch. You form the mixture into balls, deep-fry and serve hot.

Some are made with taro that has been boiled, mashed and made into a paste. These ones often have a filling in them such as pork or shrimp.

Raw taro can irritate your hands, so you may wish to wear kitchen gloves.

This web site generates income from affiliated links and ads at no cost to you to fund continued research · Information on this site is Copyright © 2022· Feel free to cite correctly, but copying whole pages for your website is content theft and will be DCMA'd.
Tagged With: Chinese Food, Fritters & Pancakes