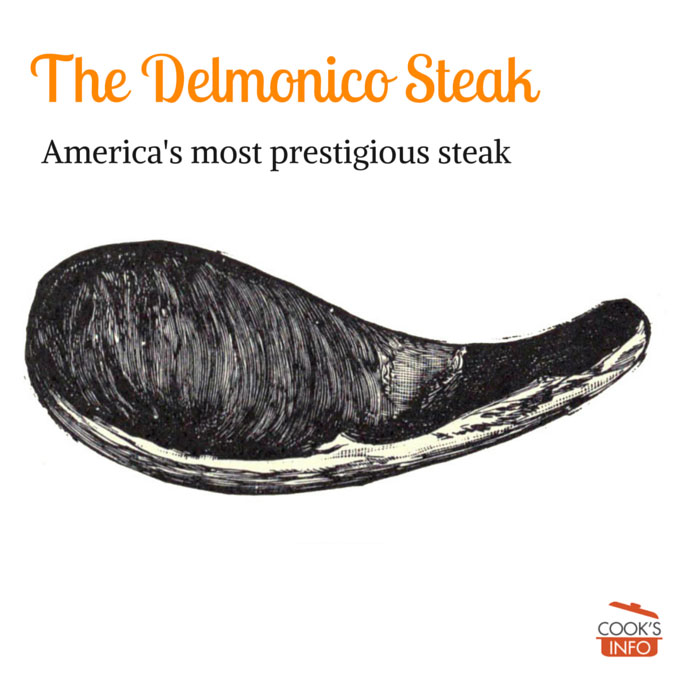 Delmonico steak was a famous, deluxe steak served at the exclusive Delmonico restaurants in New York in the nineteenth and early twentieth centuries.

Since then, the term has been applied to so many different cuts of steak that it may no longer meaningful or reliable, though that doesn’t preclude debate over what it should mean.

Over the years the term has been applied to at least nine different cuts of steak, including club steak (aka wing steak) and strip steaks from the short loin, and rib-eye steaks from the rib section.

Definition of a Delmonico Steak

Despite the vigorous debate, we feel, at the present time, it’s still best to stick closely to the written primary source that we have, which states that a Delmonico steak was a very large boneless sirloin steak, cut to be 5 cm (2 inches) thick, with a total weight of about 550 g ( 20 oz.) Such a steak reflected the grandeur of the restaurant and the wealth and stature of the worthies (and would-be worthies) who came to dine at the famous restaurant that it was named after.

Where does this definition come from?

This definition comes in writing from a man named Charles Ranhofer. In the long history of Delmonico’s Restaurant, Charles Ranhofer was its defining chef. He codified all of Delmonico’s practices and dishes into an exhaustive tome called “The Epicurean.” Many now call Ranhofer “Amerca’s Escoffier”, for how Ranhofer rendered everything into exactly reproducible items, with little if any room left for vagueness or doubt.

On the facing page, 487, Ranfhofer lists several recipes for what he terms “Delmonico Sirloin Steaks”. As for the “small” range of steaks, there is a base recipe, then variations on it follow. The base recipe is defined as being:

Note that the only difference between the two types of steak is that one is smaller and called “Small”; the other is larger, and called “Delmonico”.

It seems pretty clear that the descriptor “Delmonico” is being used to indicate the size — and ensuing prestige — of sirloin steak being served. The de luxe model. Many restaurants today use the same naming techniques, of naming the “best” (or most profitable for them) dish on offer after the restaurant itself.

Here are the two pages in question from cookbook; the two base recipes are numbered 1368 and 1375. 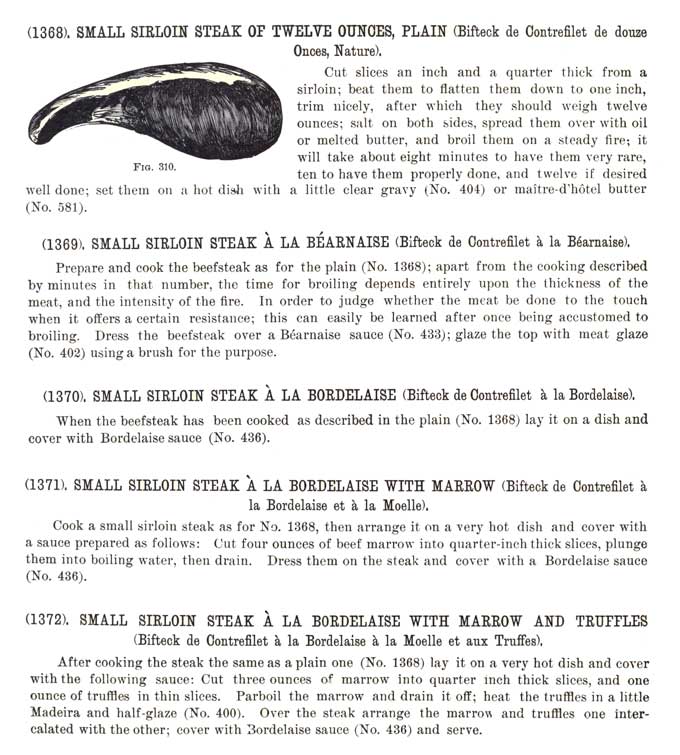 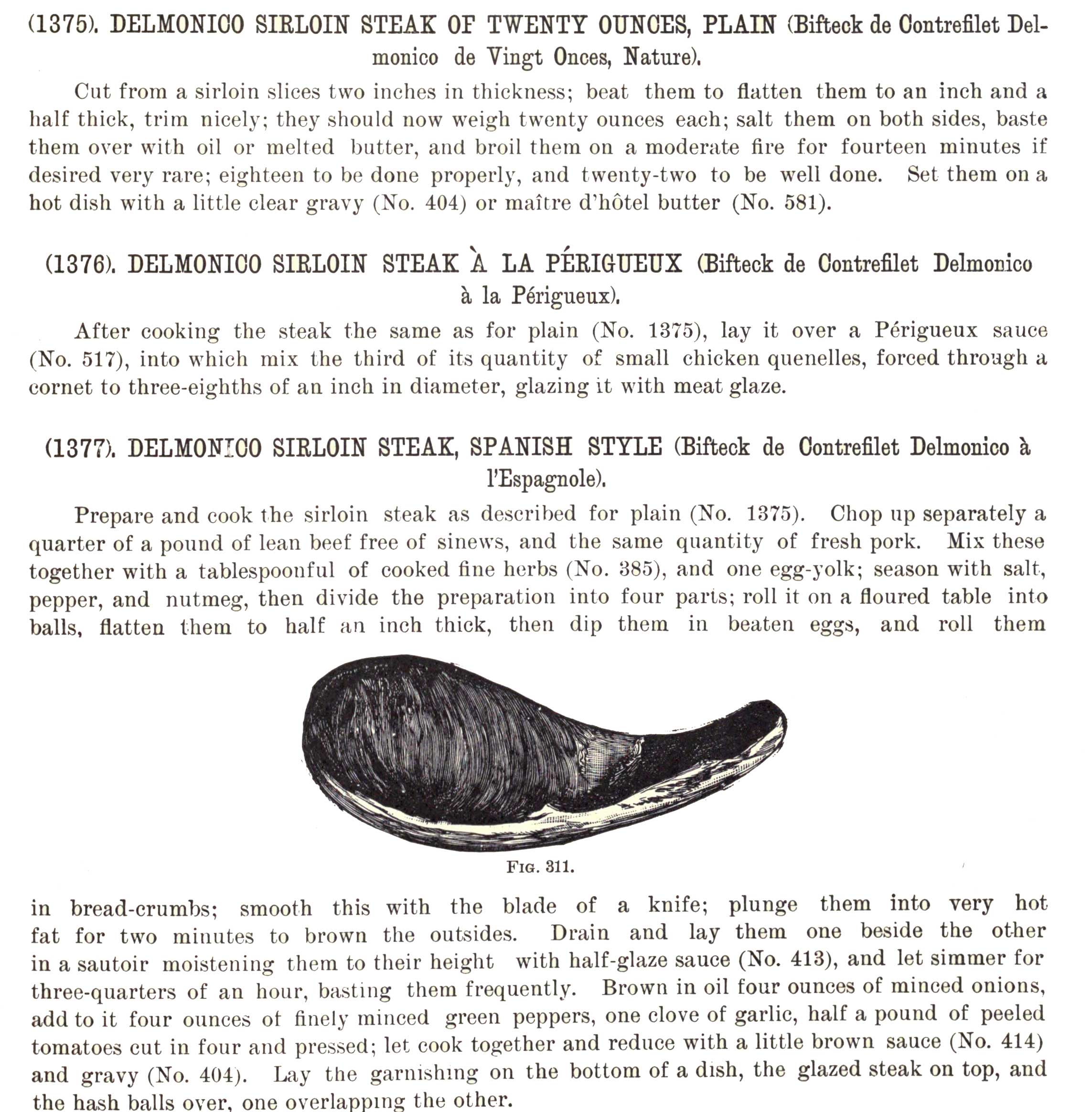 At Delmonico’s restaurant in New York, the steak was always served with Delmonico Potatoes.

It’s been said that only men could make something as simple as cooking a piece of meat, which women do all the time, into something as complex as launching a rocket, as men do with barbeque or grilling. And so it seems to be the case with the definition of Delmonico steak.

American food writer Joe O’Connell argued at (enjoyable) length in a 2001 piece titled “Delmonico steak: a mystery solved”, that he had solved the mystery and that “the original, authentic Delmonico Steak is, in modern terms, the first boneless top loin steak cut from the front of (anterior to) the short loin.” [1]O’Connell, Joe. Delmonico steak: a mystery solved. 25 August 2001. Accessed March 2016 at Steak Perfection.

Despite that, at the start of the 21st century, the balance of the popular debate still seemed to tilt in favour of a Delmonico steak being a rib steak.

It may depend on the definition of the “short loin” area of the cow – and how much that intrudes into the adjacent rib section. In 1882, Delmonico Restaurant owner Charles Constant Delmonico said to the press, when justifying the price rise of the Delmonico steak from 75 cents to $1.00: “The other day I had one of my cooks cut up four short loins to see precisely what they would make in beef, porterhouse and rib steaks, filets and Chateaubriands.”

In today’s definition of the short loin area, you would not get all those cuts out of the strictly defined short loin area. Perhaps in Charles Constant’s time, the short loin was more loosely defined to include some of the rib area. Or perhaps he was generalizing and simplifying matters for the press.

But the “chef de cuisine” at the Delmonico at the time was Charles Ranhofer, and Ranhofer’s (documented, of course) definition of short loin didn’t include any of those cuts, either. If you see his beef chart in The Epicurean, the short loin was a very specific area, separate from the rib area. Ranhofer lists rib steak recipes, and lists them as completely separate from the Delmonico steak recipes. 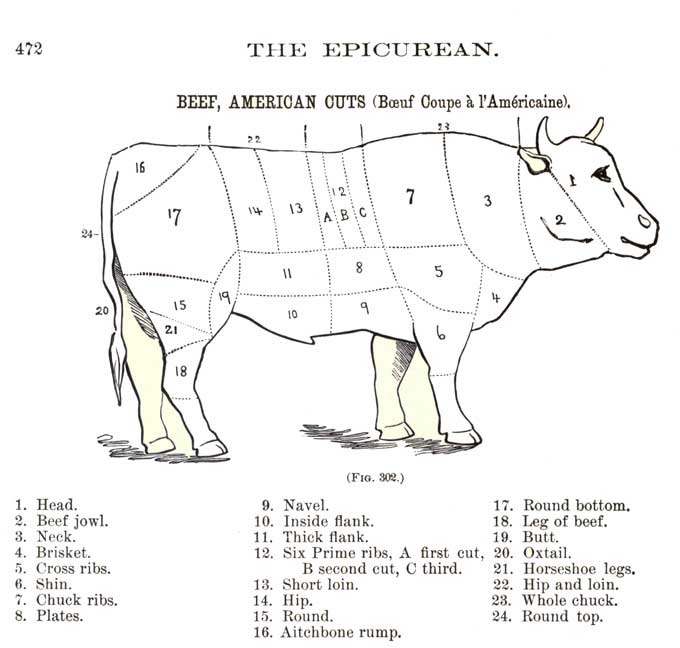 Despite the rigorous debate, CooksInfo is going to stick with the principle popularly known as “Occam’s razor”, which is “Entia non sunt multiplicanda praeter necessitatem.” Literally, it means that entities should not be multiplied beyond necessity. Or in plain terms, it means that in most situations the simplest explanation is the correct one.

In this case, a Delmonico steak was exactly what the head Delmonico chef said it was: a very large sirloin steak.

Why some people find this hard to believe may be because with tastes changing over time, they can’t believe a prized steak would come from a sirloin. Though many steak lovers still feel that sirloin has absolutely the best flavour of all beef steaks, most of the general public has been taught instead that they’re a lesser-grade steak because they are a bit chewier. So perhaps the meaning of Delmonico steak has been adjusted to mean what today’s general public would regard as a top-grade steak.

Nevertheless, we encourage readers to continue enjoying the lively and educational debate about food history and beef cuts.

Delmonico’s restaurant was opened in New York in 1827, by two brothers. The restaurant was a novelty for its day: it allowed customers to order what they wanted, instead of having to take whatever the kitchen was cooking that day. It grew in popularity to the point that even Abraham Lincoln ate there.

Sometime in the 1850s, the brothers added steak to the menu, but it is no longer known what the actual cut of steak first served was at that time.

(1375). DELMONICO SIRLOIN STEAK OF TWENTY OUNCES, PLAIN (Bifteck de Contrefilet Delmonico de Vingt Onces, Nature).
Cut from a sirloin slices two inches (5 cm) in thickness; beat them to flatten them to an inch and a half thick, trim nicely; they should now weigh twenty ounces each; salt them on both sides, baste them over with oil or melted butter, and broil them on a moderate fire for fourteen minutes if desired very rare; eighteen to be done properly, and twenty-two to be well done. Set them on a hot dish with a little clear gravy (No. 404) or maître d’hôtel butter (No. 581).

(1376). DELMONICO SIRLOIN STEAK À LA PÉRIGUEUX (Bifteck de Contrefilet Delmonico à la Périgueux).
After cooking the steak the same as for plain (No. 1375), lay it over a Périgueux sauce (No. 517), into which mix the third of its quantity of small chicken quenelles, forced through a cornet to three-eighths of an inch in diameter, glazing it with meat glaze.

(1377). DELMONICO SIRLOIN STEAK, SPANISH STYLE (Bifteck de Contrefilet Delmonico à l’Espagnole).
Prepare and cook the sirloin steak as described for plain (No. 1375). Chop up separately a quarter of a pound of lean beef free of sinews, and the same quantity of fresh pork. Mix these together with a tablespoonful of cooked fine herbs (No. 385), and one egg-yolks; season with salt, pepper, and nutmeg, then divide the preparation into four parts; roll it on a floured table into balls, flatten them to half an inch thick, then dip them in beaten eggs, and roll them in bread-crumbs; smooth this with the blade of a knife; plunge them into very hot fat for two minutes to brown the outsides. Drain and lay them one beside the other in a sautoir moistening them to their height with half-glaze sauce (No. 413), and let simmer for three-quarters of an hour, basting them frequently. Brown in oil four ounces of minced onions, add to it four ounces of finely minced green peppers, one clove of garlic, half a pound of peeled tomatoes cut in four and pressed; let cook together and reduce with a little brown sauce (No. 414) and gravy (No. 404). Lay the garnishing on the bottom of a dish, the glazed steak on top, and the hash balls over, one overlapping the other.

Ranhofer, Charles, The Epicurean. A Complete Treatise of Analytical and Practical Studies on the Culinary Art Including Table and Wine Service, How to Prepare and Cook Dishes, an Index for Marketing, a Great Variety of Bills of Fare for Breakfasts, Luncheons, Dinners, Suppers, Ambigus, Buffets, etc., and a Selection of Interesting Bills of Fare of Delmonico’s, from 1862 to 1894. Making a Franco-American Culinary Encyclopedia. New York: Charles Ranhofer, Publisher, 1894.

This web site generates income from affiliated links and ads at no cost to you to fund continued research · Information on this site is Copyright © 2022· Feel free to cite correctly, but copying whole pages for your website is content theft and will be DCMA'd.
Tagged With: Beef Steaks, Delmonico's Restaurant, Steak