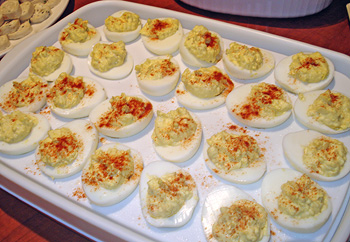 Contents hide
Devilled eggs are hard-boiled eggs that are peeled, cut in half lengthwise, have their yolks taken out and mashed with other ingredients, then have this mashed yolk filling put back in their centres.

The filling will mound up a bit higher than the egg white “shell” it is put back into. The stuffed egg is often garnished with sprinkles of something such as paprika, chopped green onion, chopped chives, crumbled cooked bacon, diced olives, etc.

Everyone’s recipe for Devilled Eggs is different. Typical ingredients to mix in with the egg yolk are mayonnaise, mustard, and seasonings. The differences often mostly occur in the seasonings.

White pepper is often called for as a seasoning instead of black pepper, because black pepper can look like fly specks in your mashed yolk. Other frequent seasonings are garlic salt, dill weed, Tabasco sauce, horseradish, cumin, curry powder, etc. Some people like also to lightly salt the egg white cavity before they stuff it.

Devilled Eggs is easy recipe for an hors d’oeuvre table or for a cold summer starter. They are easy and impressive to bring along to parties, so they show up at many potluck dinners. Though they are now considered very, very old-fashioned, and though many other such old-fashioned recipes have disappeared from potlucks, platters of Devilled Eggs still get emptied with surprising speed.

When taking Devilled Eggs to parties, make sure to keep them chilled until the time to serve them has come. Insulated food coolers are ideal for this, as they will keep the eggs cold during transport, and negate the need to ask your host for room in the fridge once you arrive.

Here is a simple, sample recipe for Devilled Eggs:

Hard boil the eggs, and cool them in cold water, then pop in fridge for a few hours (if there is time.) Peel the eggs, cut them in half lengthwise, and spoon out the egg yolk and pop it into a bowl along with all the ingredients except for the paprika. Mix and mash. Spoon the mixture back into the empty cavities in the egg whites. Sprinkle with paprika, chill for a few hours to allow the flavours to blend (if time), then serve.

The toughest challenge in making Devilled Eggs is in peeling the hard-boiled eggs. You don’t want pockmarked egg white from where the shell stuck to it, as that would reduce the attractiveness of your dish, and Devilled Eggs are 50% eye appeal.

To make sure your hard-boiled eggs will peel easily, don’t use really fresh ones. If you are buying them from the store, try to find the oldest dated carton. If you have enough notice, buy them a week or so in advance and let them age in your fridge. If you don’t have enough notice, and then the eggs are really fresh, leave them out on the counter overnight or for the day — while it is safe to store eggs out of the refrigerator (contrary to what North America thinks), they will lose their freshness fastness when left out, and that’s what you want here.

The other challenge is not to overcook the eggs so that they end up with a green tinge around the yolk. While the green tinge has no taste, it is unsightly and off-putting.

The rule of thumb is to place eggs in a pan and cover them with 1 inch (2.5 cm) of cold water (not ice water, just almost lukewarm will do.) Heat the water to boiling. When the water has reached the boiling point, remove the pan from the heat (sic), cover, let stand for 15 minutes, then drain the boiled water and fill with very cold water from the tap and let stand for 10 minutes. Then drain, and peel.

Don’t break the whites as you are scooping the yolks out. You need them intact to act as shells to stuff.

If you find that you often don’t have as much mashed yolk as you’d like to fill up your eggs with, consider adding additional ingredients such as chopped onion or celery.

Some people like to pipe the filling in for a fancier appearance. If you don’t have a piping bag, or can’t be asked to futz with cleaning one, but still want the fancy effect, you can put the filling into a small sealable plastic bag, seal it, snip a corner off the bottom, and then squeeze the bag to pipe it out.

A recipe for “Stuffed Eggs” appeared in Manuscrito Anonimo, a 13th century Spanish cookbook by an anonymous author. The recipe has you hard-boil eggs, cut them in half, take out the yolks and mash them with fresh coriander, onion juice, pepper, salt, oil and murri, then stuff the eggs with this mixture, insert a small stick in each one, and sprinkle with pepper as a garnish.

In the 1800s, in European and North American cooking, it didn’t take much for people to define a dish as spicy. A simple sprinkle of black pepper would have done the trick. With pepper and mustard, to their taste buds these eggs certainly would have seemed as hot as Hades; thus their name, Devilled Eggs.

Devilled Eggs experienced somewhat of a revival in popularity at the turn of the 21st century, with the advent of the Atkins diet.

Here are two selections of Devilled Egg recipes from the Los Angeles Times Cook Book No. 2 (c. 1905). Edna Chapin’s is the more ambitious. She has you first trying to find olive oil in 1905 America (!), then tying the eggs up with ribbons.

DEVILED EGGS. Boil eggs 20 minutes, then plunge them into cold water. Remove the shell and cut into halves. Take out the yolks without breaking the whites, and put them in a bowl. Rub to a smooth paste, and season with salt, pepper and a little melted butter and a bit of mustard, stirred up with vinegar, or a small quantity of mayonnaise. Fill each half of egg with this prepared yolk. Serve on crisp lettuce leaves. (Mrs F.W. Koch, Etiwanda, California, page 96)

DEVILED EGGS. Boil 6 eggs hard, drop them into cold water for a minute, and then carefully remove the shells; cut them in half with a sharp knife, and gently remove the yolks; mash and mix them with a dash of pepper salt, a tablespoonful of olive oil, a teaspoonful of vinegar and a little chopped pickle or parsley. Mold this mixture into balls and replace in the whites. Put the two halves of the egg together and tie with baby ribbon. (page 99, Edna S. Chapin of Dora Street, Los Angeles)