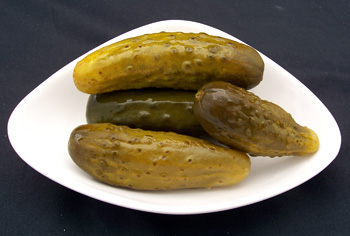 Dill Pickles, often just referred to as “Dills”, are small cucumbers, pickled whole and unpeeled, flavoured with dill weed and dill seed. They have a sour taste, and are twice as popular as sweet pickles in America.

There are two styles of pickling to make Dill Pickles.

One method is to pickle the cucumbers in spiced, flavoured vinegar. Jars of these pickles will be shelf-stable, unopened.

The second is to ferment the cucumbers in a brine in which lactic acid develops using the flora on the cucumbers as a starter. This fermented style is more traditional. Jars of these must be kept refrigerated.

Another sub-style of Dill Pickle is the “Kosher Dill.” This does not mean necessarily indicate kosher, in the religious sense; rather, it indicates made in the style of Jewish Dill Pickle makers such as those in New York City, which is with garlic added. Kosher Dills will usually also be pickled using a fermenting process.

At some snack bars, you can get Dill Pickles battered or breaded, and deep-fried.

Some university home economists now warn of listeriosis danger with the fermented, vinegar-free style of dill pickle. [1] They cite a 2005 study [2], which found that Listeria monocytogenes, the bacterium which causes listeriosis, which grow in pH as low as 4.0-5.0, even with salt concentrations as high as 7.6%. Consequently, the advice is that home-prepared “dill pickles of this type should not be distributed.”

Dill pickles can be high in sodium, though lower-sodium versions are now available.

“To Pickle Cucumbers in Dill: Gather the tops of the ripest dill and cover the bottom of the vessel, and lay a layer of Cucumbers and another of Dill till you have filled the vessel within a handful of the top. Then take as much water as you think will fill the vessel and mix it with salt and a quarter of a pound of allom to a gallon of water and poure it on them and press them down with a stone on them and keep them covered close. For that use I think the water will be best boyl’d and cold, which will keep longer sweet, or if you like not this pickle, dose it with water, salt and white wine vinegar, or (if you please) pour the water and salt on them scalding hot which will make them ready to use the sooner.” — Joseph Cooper (Cook to Charles I). “The Art of Cookery Refined and Augmented”. 1654

“GERMAN PICKLES.—Take two or three dozen pickles (good-sized ones }, half a peck of small grape leaves and some dill; wash the pickles and leaves; take a small jar and lay in the bottom of it a layer of leaves and then of pickles, and a little dill; lay in alternate layers; make a salt water brine of very warm water, enough to cover the pickles; do not make it too salty; put a plate in the jar, and lay on it a heavy stone. In about a week the pickles will be sour. Try but a few for the first time; you may like them and you may not. I think they are very nice.” – Author not given. The Fresno Republican. Fresno, California. 19 July 1879. Page 6.

“A new pickle in H. J. Heinz ’57’ line, a processed dill, a crisp-skinned juicy one with a loud smack of dill in its flavor, packed in 25-ounce jars, sells in local groceries and delicatessens, in national distribution.

This pickle, like all Heinz pickles, is a quality job. It has a homespun flavor and has been subjected to rigid kitchen and laboratory tests before getting into commercial production. Heinz is a firm not satisfied with the ordinary run of crooked little cucumbers so often found in home pickle crocks. Their horticulturists have developed a strain of cucumbers especially suited for the jar. These cucumbers have thin skins, are straight as toothpicks, tender-hearted, a pickle that can easily absorb the savors of spiced vinegar.

The seeds of this pedigreed pickle stock are distributed by the Heinz Company to independent farmers in Michigan, Wisconsin, Indiana, Colorado, California, and Iowa, who grow the pickle harvest under contract. It takes about one and one-half months for the crop to mature, and during this period, Heinz field specialists are on twenty-four-hour call to answer questions or actually to pitch in and help the grower with any plant crisis. Different pickle varieties require that cucumbers be picked at different stages, and each day, as the cucumbers reach varying sizes, they are hand-gathered. The pickles are packed in special crates designed to prevent bruising and trucked to a near-by Heinz plant for immediate processing. Not only are Heinz cucumbers of top quality but so are the seasonings; spice-buyers for the firm cover the globe selecting the best grades of spices. Heinz’s own jewel-toned vinegars are used for the processing.” — Paddleford, Clementine (1898 – 1967). Food Flashes Column. Gourmet Magazine. July 1950.

Grocery store ad mention of “German Dill Pickles” petered out around 1917 in America, perhaps owing to the First World War. The term reappeared a bit in the early 1920s, but mostly fell out of use.

If a French, Italian, etc, recipe calls for dill pickles, it’s likely that that is a mistranslation and that a pickle such as “gherkins” is meant.

[1] Simone, Amy. Assistant Professor, Food Safety and Quality. Homemade Dill Pickles May Pose Risk of Listeriosis. In “Research News You Can Use”. University of Florida/IFAS Department of Family, Youth and Community Sciences. 3 January 2006.