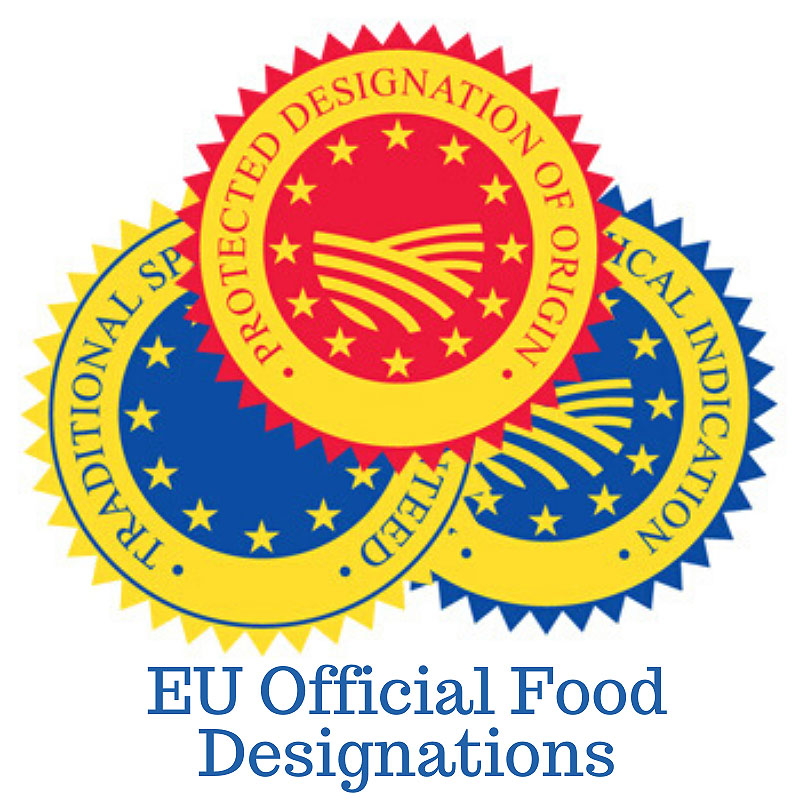 There is an array of European Union (EU) designations concerning food and wine.

The goal of them is reputedly to make sure that consumers get a quality product. Some critics note that they can also operate as a form of protectionism.

Broadly, these are known as geographical indications, or (GIs):

“A geographical indication (GI) is a sign used on products that have a specific geographical origin and possess qualities or a reputation that are due to that origin. In order to function as a GI, a sign must identify a product as originating in a given place. In addition, the qualities, characteristics or reputation of the product should be essentially due to the place of origin. Since the qualities depend on the geographical place of production, there is a clear link between the product and its original place of production.” [1]Frequently Asked Questions: Geographical Indications. World Intellectual Property Organization. Accessed April 2021 at https://www.wipo.int/geo_indications/en/faq_geographicalindications.html

Southern European countries were the initial enthusiasts for a European-wide food and wine designation system, which is understandable as they stood to benefit more from them while Northern countries would be hurt. The French had their own system, starting with their AOC in 1935, then followed by the Italians, Spanish and Portuguese, but these laws and protections only had force in their own countries.

In 1992, European-wide designations for food were introduced, coming into effect in the summer of 1993 (alcohol is covered under separate legislation.)

There are three levels:

PDO and PGI are similar: the primary distinction is how close the link is to the indicated geographical location:

“For a food to have a Protected Designation of Origin, there is a strong link to the geographical region as the food needs to be produced, processed, and prepared within a geographical location and possessing qualities or characteristics exclusive to that specific geographical location. For example, Roquefort cheese must be made with milk from Lacaune or black breeds of sheep, matured in natural caves near Roquefort in Aveyron France, using spores of Penicillium roqueforti which grow in these caves. Whereas a Protected Geographical Indication, the link is not as strong, because only at least one of the stages of production, processing or preparation must occur within that geographical location.” [2]Understanding Food Labels. Where does my food come from? Step 1.13. University of Reading / European Institute of Innovation and Technology. Online course. Accessed September 2020 at https://www.futurelearn.com/courses/understanding-food-labels/1/steps/795273

The EU system has not been without its challenges. The EU must be vigilant across Europe, to ensure that the system doesn’t become as discredited as did Italy’s DOC system through bribery or cheating. Countries that are amongst the first to slap protection on their own goods — such as France — are also amongst the first to protest against other countries getting it, as France did vociferously when Greece won protection for Feta Cheese.

The Southern EU countries are pushing the envelope further now, saying that the products must not only be made in their own regions but also packaged only there, much to the annoyance of the Northern EU countries who can do it more cost effectively at home. The UK fought against being forbidden to bulk import prosciutto and package it in the UK, while Belgium fought against being forbidden to import kegs of Rioja wine to be bottled more economically in Belgium. Both lost against the producers. Though the producers’ stance in both cases was that they wanted complete quality control, even the most casual observer would see that the producers also won by keeping control of the profit markup that happens during packaging.

In any event, even though there are now European wide certifications, the southern countries continue to run their own at the country level at the same time. The European PDO certification is equivalent to the AOC in France, to the DOC in Italy, to the DO in Spain, and the “denominacao de origem” in Portugal. In fact, to apply for a PDO a producer must first apply for the equivalent national certification.

In the UK, there was never a concept of designating foods for heritage or quality value, and consequently, there are no corresponding national protection certificates. In England, Northern Ireland and Wales, producers must apply to the Department for Environment Food and Rural Affairs; in Scotland, they apply to the Scottish Office of Agriculture, Environment and Fisheries.

There is no sign yet of the EU doing away with the duplicate under-layer of national certifications and having everything just run under the PDO / PGI programmes.

A 1999 study conducted at Wye College in the UK found that prices of designated goods were 18% more than that of competing goods. The study concludes that consumers appear willing to pay the extra; some critics observed that consumers have any choice, not being able to choose to buy a less-expensive Parmesan any longer.

Here are the main European designations for food, in order from most exacting to the most lenient designation.