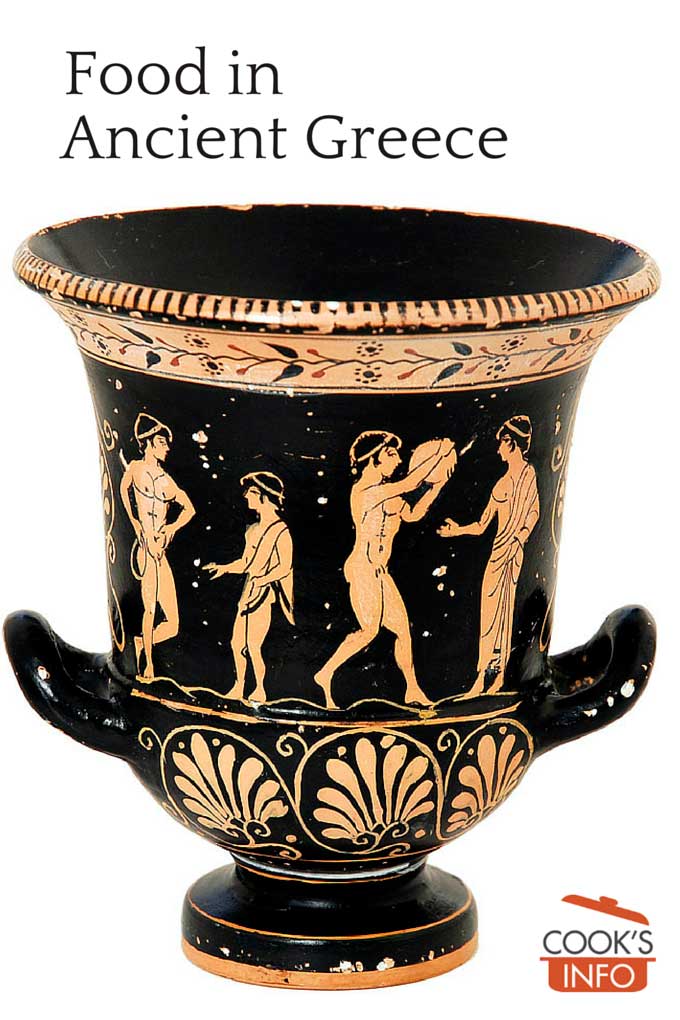 What we know about food in Ancient Greece comes from their literature. No book specifically on food or recipes is extant from that period, but food is talked about a great deal by characters in Greek plays.

Greeks had two kinds of symbolism in their food. One kind was religious symbolism. Wine, for instance, was associated with Dionysos; bread with Demeter. And secondly, like the Jews, the Greeks wanted to use their food as a way of distinguishing themselves from their neighbours. While Jews used food to distinguish themselves religiously as a chosen people, the Greeks used food to show that they were civilised people in a barbarian world. The social etiquette rules, and “diets” around food reinforced this. They saw the feasts of the Persians as morally decadent. Overeating and conspicuous consumption were barbaric. Drinking wine straight up was barbaric. The Greeks approached both eating and drinking alcohol with frugality, to highlight their idea of themselves as poor but free people.

Bread, wine and the olive comprised the foundation of their diet, and continued to do so until well into the 300s AD. Vegetables were also highly important. Greeks put a great deal of effort and study into increasing the yield of their agricultural crops. Beans were an important source of protein, though followers of Pythagoras were taught to avoid them (see entry on Broad Beans.)

Most frying was done with olive oil, but frying wasn’t done much before the 5th century BC; up until then, the Greeks mostly braised or boiled their food.

The Greeks taught the Romans how to make the fish sauce called “garum.” 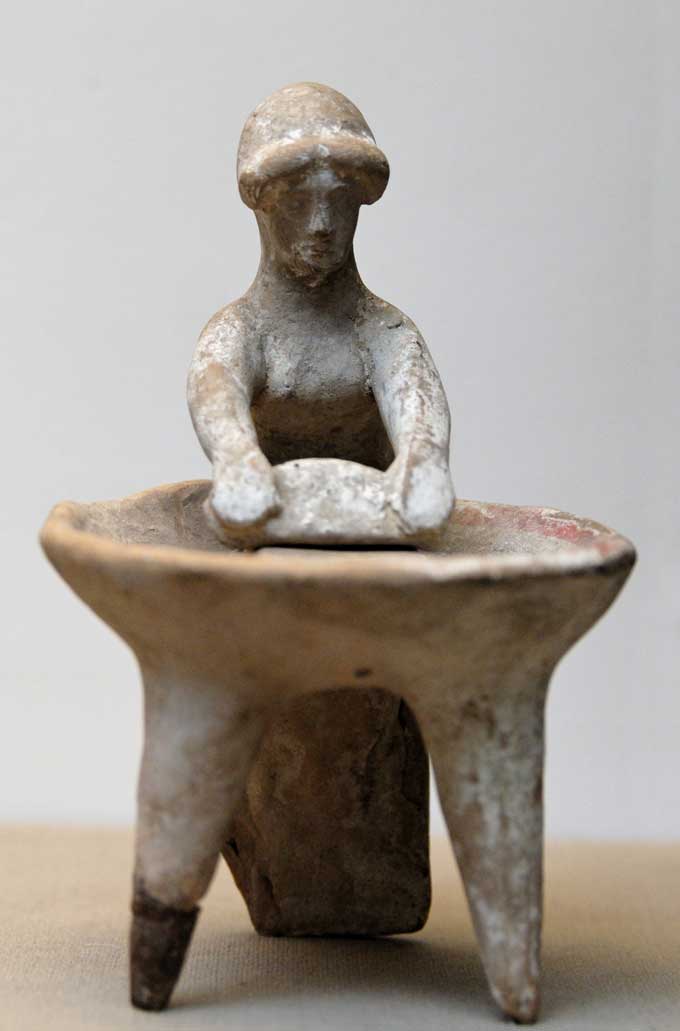 The Greeks could grow barley and emmer, but those didn’t make great bread. Barley and emmer could be used for soups, stews, and porridges.

Bread was often barley cakes or flat bread. Barley cakes were called “maza.” The Romans called the Greeks “barley eaters.” The poor’s barley bread would often even contain chaff in it, as the flour wouldn’t have been finely sifted.

Greece wasn’t a great place to grow wheat. It was imported. Consequently, wheat flour was very late to come along as a food item.

Some ordinary households would have ovens made of pottery, allowing them to make their own bread. After the 5th century BC, when bakers appeared in the cities, bread could also be bought from stalls in the markets. Athens imported wheat from other countries, and a feature for which the market at Athens became known was the sale there of good wheaten bread. Commercial ovens were run by corporations during the night. 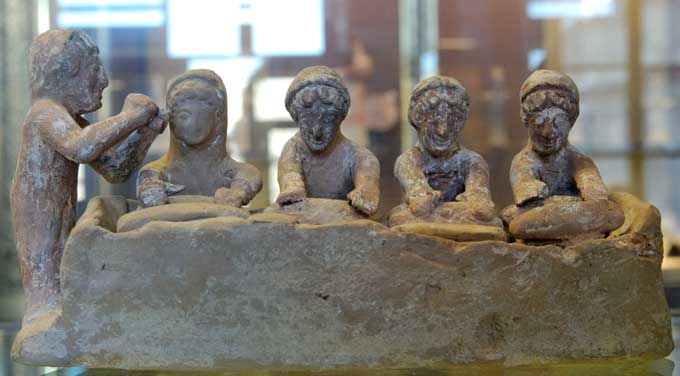 Greek warriors were considered heavy-bread eaters, not heavy meat-eaters, as they are now. 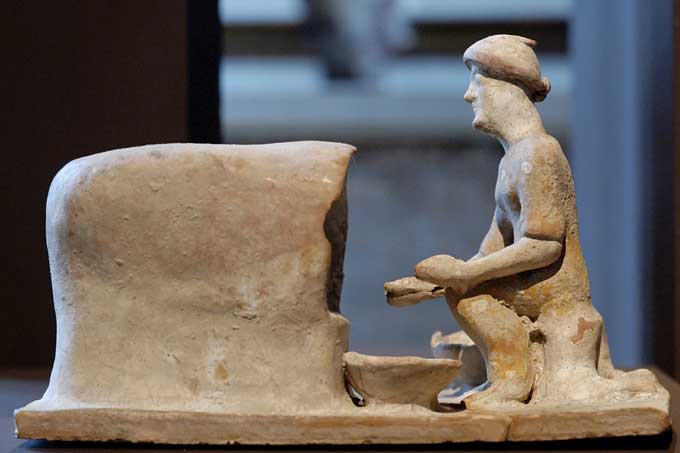 Milk was only prescribed as a medicine, and then it would usually be goat’s milk. It was mostly made into cheese.

Butter was for barbarians.

The Influence of Dietetics in Ancient Greece

The Greek philosophers started a view of health and food that would last till the end of the Middle Ages. Raw nature was seen in Greek’s minds as bad and uncivilised. Nature needed to be corrected, for instance by agriculture, and so did food, so that it would match the individual nature of your body. Your body had four elements or “humours” which could go into imbalance, and what you ate could address this and make you well again. Food would be prepared based on how it could influence your personal humours to make you well again, or on the basis of how the food needed to be corrected so that it would be balanced for your “humours” and not throw their balance off when you consumed it. 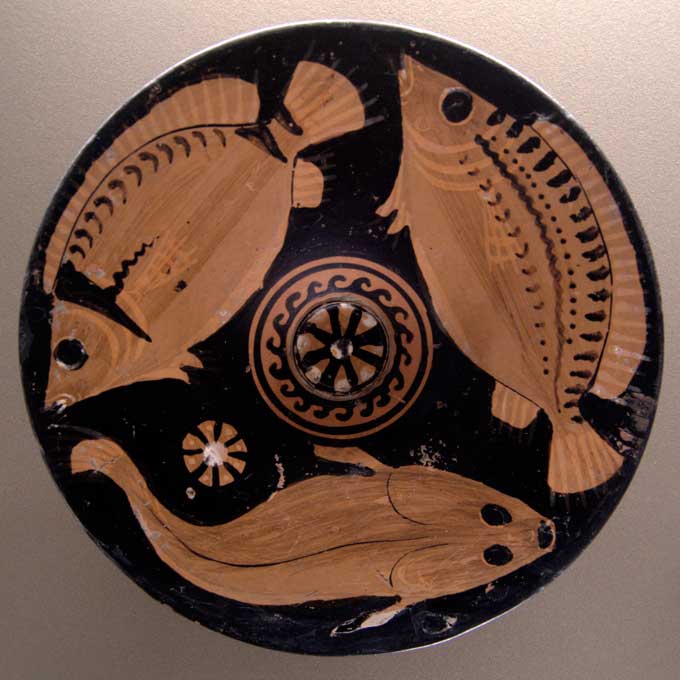 Greece just doesn’t have good pasture land for livestock, so meat was scarce. The Greeks loved fish, but low on the scale of their likes, and thus cheapest, were small fish such as anchovies and sprats. Tuna, sea bass, grey and red mullet, grouper, were esteemed and expensive. They particularly loved eel; it could cost at least 12 drachmas (a small sheep might cost ten drachmas.)

Dried fish steaks were traded and sold in markets.

Fish was easier to serve than meat, because to serve meat you first had to arrange to sacrifice it, and with fish you didn’t. The first tuna caught in a good year, though, would be offered to Poseidon.

Fish as a food are not really present in Homer’s Iliad, though it is somewhat in his Odyssey. In general, though, the heroes of the earliest Greek writings such as the Iliad and the Odyssey considered fish a “lesser” food. [1]Santos-Neves, Carolina. 10 Questions for Olympic Diet Expert Dr. Louis E. Grivetti. Gourmet Magazine. 25 July 2012.

Though the Greeks ate some meat, meat had slightly barbaric connotations for them. They probably didn’t eat more than 1 to 2 kg (2 to 5 pounds) of meat a year in total. There were even vegetarian groups that rejected it entirely. Greeks would, however, eat dogs, something that is now beyond the pale for the Western world.

Other Greeks felt that Greeks in Thessaly, Macedonia, and Thrace ate too much meat.

Meat was never eaten before it was sacrificed; this in their mind showed a respect for the life of an animal by dedicating it to a god. Every banquet began with a sacrifice. Animals such as hares and geese weren’t sacrificed, however, so they were a less complicated meat to serve. 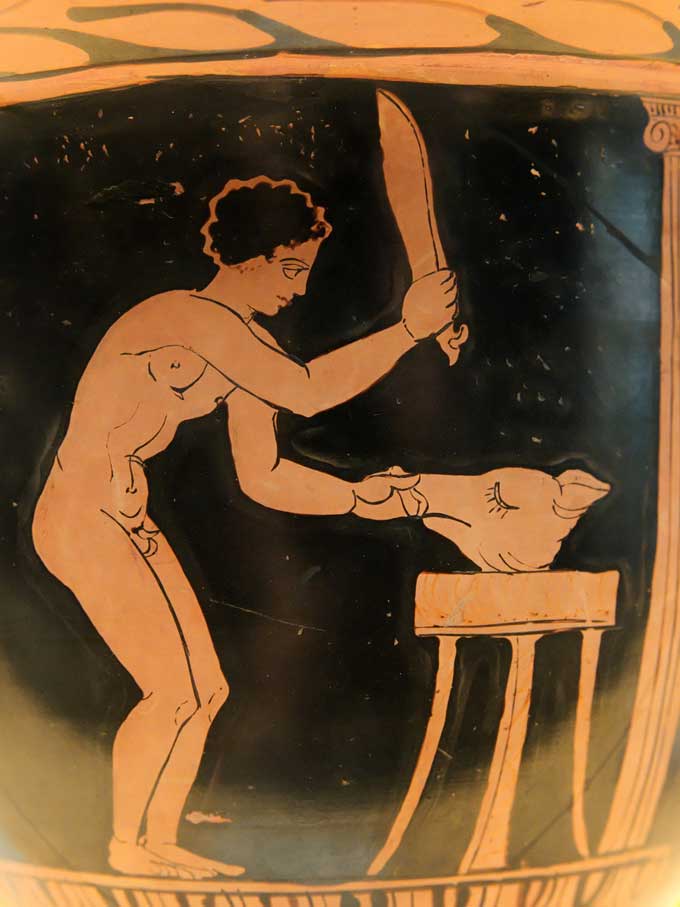 Athenaeus reported that for a time, there was great confusion over what to call meals, and who ate when. For a while, some people used the words ariston, deipnon, and epidorpis interchangeably to mean “mid-day meal”, and the words dorpestos and hesperisma to mean the evening meal. By the end of the Greek classical period, though, there were just 3 meals, and they were called akratisma (“breakfast”), ariston (“mid-day meal”), and deipnon (“evening meal.”)

For breakfast (akratisma), the poor and the rich ate the same thing at home: bread dipped in wine (not watered down.) Sometimes, you would also nibble on some figs or olives. A person who skipped breakfast was called an “amaristeton.”

Lunch (ariston) was a light meal of often warm or cooked foods, eaten outside the home. 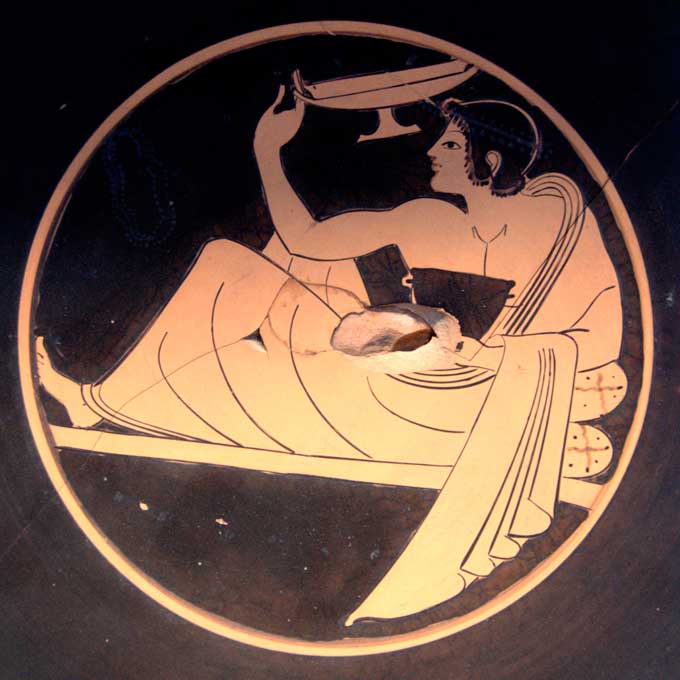 For the evening meal, dinner (deipnon), there were two courses: a starter and the main course. The starter was called “sitos”: it was the starch, the carbohydrate, the “fill you up” thing. It would be foods such as barley, wheat, lentils, beans, etc, but with pronounced flavours, to make it interesting. At a wealthy table, there would often be a selection of these. The main course was called “opson”: originally this meant relish, but it came to mean everything else, the main thing of interest — whether fish, meat, cheese, salad, or vegetables, or sometimes just olive oil.

At formal dinners, men and women ate separately. The upper class ate reclining on couches, which meant only one hand was available to handle food with. Homer had his characters eat sitting up.

In Sparta, the meals were different — they were communal meals called “phiditia.” The goal was to promote tight bonds for battle. When boys were twelve, if they had proved themselves, there were accepted into a group of 15 men. These men would both fight and eat together all their lives. They took their meals together in communal halls, by law. All 15 sat at a common table, in a hall of other similar tables. The law dictated certain dishes that had to be served. Dishes were also brought from home, and everyone was expected to contribute. Aristotle pointed out that this was a burden on the poorer citizens; those who could no longer contribute lost the right to be a citizen. At the age of 30, men could set up their own households, but they still had to have meals at the communal halls. 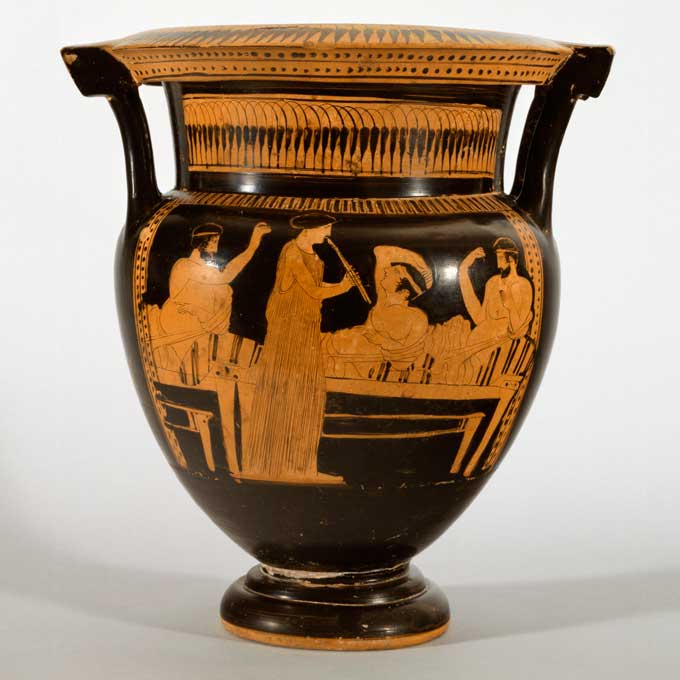 Here, a “symposium,” or men’s drinking party, is under way. Entertainment at such events was provided by “hetairai,” or female prostitutes, who also served as musicians and dancers. Reclining on dining couches are two bearded men and an unbearded youth, who tilts his head back to listen to a girl playing the double flutes. (The Walters Art Museum, Baltimore.)

The Greeks didn’t drink wine with their meals (neither did the Etruscans over in Italy.) Wine was drunk separately, at symposiums (“symposia”), which were only for men, with the occasional rare appearance of a woman.

During the symposiums, men recited poems and drank wine while reclined. Some food refreshments might be served, but only very simple ones, such as cheese and some form of bread.

The Greeks believed that when you drank enough wine, you could have your body possessed by Eros, Dionysus or the Muses. While the Romans admired many things about the Greeks and copied them, they didn’t buy this whole “possessed by the god thing” or wine as a vehicle of sacred possession. The Romans thought that Dionysian priests, prancing about drunk and communing with their god, were all a bunch of charlatans.

Between 430 to 426 BC inclusive, a plague wiped out ⅓ of Athens’ population, ending its reign as a dominant force in the Mediterranean.

Though over the centuries many speculate what exactly the plague that hit Athens was, it was in 2005 that typhoid was identified by studying teeth recovered from an ancient cemetery in Kerameikos, Greece.

Typhoid fever (caused by the bacteria called “bacterium Salmonella typhi”) is transmitted by food or water. Its spread is mainly caused by poor hygiene and sanitation. It only affects humans.

At the time, Athens was engaged in the Peloponnesian Wars, which would have caused overcrowding within the walls of the city and strained any sanitary measures and water supply protection that the city had.

Greeks distrusted water anyway, and rarely drank it straight, mixing it with wine instead, which would kill off most — though not all — pathogens.

“Both of us broke a bit of black barley bread, with chaff mixed in the kneading, twice a day, and had a few figs; sometimes, too, there would be a braised mushroom, and if there were a little dew we’d catch a snail, or we’d have some native vegetables or a crushed olive, and some wine to drink of dubious quality.” — Poliochus, in The Deipnosophistae. Athenaeus. Charles Burton Gulick translation.

“Our dinner is a barley cake bristling with chaff, cheaply prepared, and perhaps one iris-bulb or a dainty dish of sow-thistle or mushroom or any other poor thing that the place affords us poor creatures.” — Antiphanes, ibid.

“I [a Greek] would never be able to make an alliance with you [an Egyptian]; there is no common ground for our manners and customs to share, and great differences to separate them. You bow down before the cow, I sacrifice her to the gods. The eel you consider the greatest divinity, and we the very greatest dish.” — Antiphanes. “The Lycon.”

The earliest surviving mention of what Olympic athletes ate was recorded by Diogenes Laërtius, who lived sometime in the 200s to 300s AD. He recorded the philosopher Philostratus (170 to circa 245 AD) as saying, “Their food was bread made from barley and unleavened loaves of unsifted wheat. For meat they ate the flesh of oxen, bulls, goats, and deer; they rubbed themselves with the oil of the wild olive.”

This web site generates income from affiliated links and ads at no cost to you to fund continued research · Information on this site is Copyright © 2022· Feel free to cite correctly, but copying whole pages for your website is content theft and will be DCMA'd.
Tagged With: Ancient Greece, Greek Food