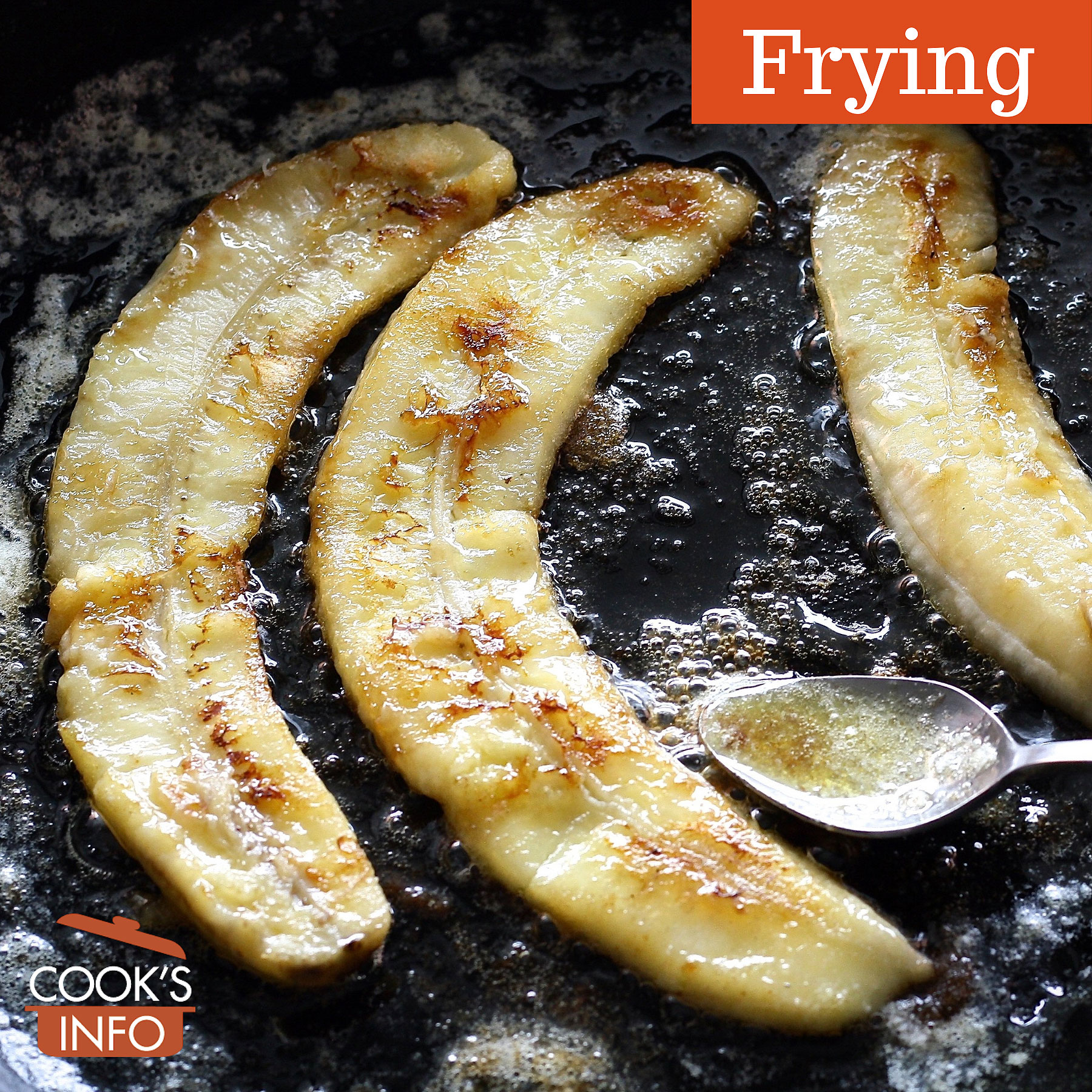 The verb ‘to fry’ denotes a cooking process whereby food is cooked in a wide, shallow pan on top of a heat source, usually high-heat.

The Penguin Companion to Food says that frying is:

“The process of cooking food in hot fat or oil in an open pan. The fats and oils used vary from place to place. All share the quality that they can be heated to a much higher temperature than boiling water. The surface of food cooked by frying therefore coagulates quickly.” [1]Davidson, Alan. The Penguin Companion to Food. London: The Penguin Group, 2002. Page 387.

“[Frying] is more commonly regarded as a method of cooking small pieces of fish, meat, game or poultry in an open sauter or frying pan or plat à sauter with a small amount of fat on top of the stove. Since the fat may be raised to a very high temperature without risk of burning this is often the quickest method of cooking but it’s very speed of execution demands constant attention by the cook. Direct heat only reaches the underside of the food so that after a period certain it has to be turned.” [2]Pellaprat, H.P. Modern French Culinary Art. London: Virtue & Company Ltd. 1969. Page 405.

Foods that have been fried can have several characteristics that make them appealing:

Sometimes regular frying is referred to as “shallow frying” to distinguish it from “deep frying.”

“Shallow frying, using smaller quantities of oil or fat in a low-sided pan, is used for many foods, including eggs, fish, and steaks, which are allowed to brown on one side and are then turned. The residue left in the pan after meat has been shallowfried is often used as the basis of a sauce (see deglaze.) [Shallow-frying] is sometimes called ‘pan-frying’ in English.” [4]Davidson, Alan. The Penguin Companion to Food. Page 388.

Some researchers are saying that the type of fat used in frying can influence the nutritional results:

“Fried foods are actually the composite mixture of food together with frying oil, given that during frying part of the oil is absorbed by the food. Thus, frying oil quality drastically affects the quality of the food fried therein.” [5]Chiou, A. and Kalogeropoulos. Virgin Olive Oil as Frying Oil. Page 633.

It’s suggested that if a healthy oil such as olive oil is used as the frying oil, then the fact that that oil is absorbed into the food and becomes part of the dietary intake can be a positive thing (provided it is balanced on the plate with non-fried items):

“The authors considered that the high intake of cooking fat in the Mediterranean countries offers a great potential for manipulating the quantity and quality of fat intake, which is not possible in other countries where the proportion of cooking fat is much lower. An example is from the Greek culinary economy: the pan-fried (in olive oil) fish and shellfish which provide significant amounts of energy due to the absorbed oil are traditionally served together with fresh salads or boiled greens, dishes of low fat content. Therefore, a typical meal containing fried fish is not expected to supply excess fat and energy.” [6]Chiou, A. and Kalogeropoulos. Virgin Olive Oil as Frying Oil. Page 634.

Technique in frying is very important. In baking, food can just sit in an oven; in boiling, it can just bubble away in hot water, but frying requires constant attention from the cook, and the right technique:

“No other cooking technique gives you the same sensorial satisfaction as frying, but making perfectly fried food requires precision and a thorough understanding of the process. While other cooking methods can lean on quality ingredients or inventive seasoning for success, fabulous fried food is all about technique. Any type of cooking that uses fat or oil for heat transfer is a form of frying.” [7]Joachim, David, Andrew Schloss and A. Philip Handel. The Science of Good Food. Toronto, Canada: Robert Rose. 2008. Page 259 – 261.

Most people don’t get their frying pans hot enough before starting to fry. Some recommend as a way around this to heat the pan first until a drop of water on it will dance and dissolve instantly, then add the oil or cooking fat. (Exception: do not heat non-stick pans empty like this.)

On the other hand, experienced cooks say they can tell by the “waves” in their oil if it’s ready to use or not as it heats in the pan. They want to get the cooking fat temperature raised to the right point, because the lower the temperature you fry at, the more frying fat the food will absorb.

You can drain fried foods on newspaper, paper towel, a clean paper bag, or a wire rack.

What happens in frying

Here’s a scientific look at what happens in frying:

“During frying, part of the water present in the food is replaced by cooking oil; in this context, frying may be considered largely as a dehydration process having the following distinct characteristics: (i) high oil temperature (160 to 180 °C), which enables rapid heat transfer and shortens cooking time, (ii) product temperature— apart from the outer crust region—does not exceed 100 °C, and (iii) leaching of water-soluble compounds is minimal.

Frying involves 2 stages. During the 1st stage, the high temperature of the oil causes water evaporation from the food surface layers, whereas at the same time water from the core starts flowing towards the external layers. Steam production has 2 consequences; it limits the penetration of oil into the food and it does not allow the temperature of the core to exceed 100 °C. After evaporation of a certain proportion of water the 2nd stage begins. During this phase, hot oil begins to penetrate into the food and a crunchy crust is formed on the outer surface, which then prevents excessive oil absorption. The net result is a fried product with 2 characteristic zones: the dehydrated surface and the core where temperature did not exceed 100 °C.

Overall, the actual time period that the hot cooking oil really acts on the food is rather quite short. In fact, most of the total frying time corresponds to the 1st phase when the water is evaporating and the temperature inside the food does not exceed 100 °C. In the case of potato frying, evaporation can be assumed to last approximately two thirds of the total frying time and the action of the hot oil lasts only about 2 min. On this basis, frying may be considered as less aggressive for the thermolabile [“readily destroyed or deactivated by heat”] food constituents compared to other cooking method.” [8]Chiou, A. Virgin Olive Oil as Frying Oil. Page 633.

Frying at the right temperature and with the right amount of fat should actually cause a barrier to form on the outside of the food being fried, preventing too much fat from entering the food:

“The surface of food dries almost instantaneously on contact, forming a crust. This crust acts as a barrier that separates two processes of cooking. On the outside, conducting currents of hot fat brown and crisp of the surface, but once a crossed forms, the oil cannot permeate any deeper than a fraction of a millimeter. In addition, steam escaping through the crust and inhibits oil from being absorbed. On the inside, as heat is absorbed at the surface, water inside the food turns to steam, causing fibers to soften, proteins to the nature, and starches to gelatinized.

Although some fat is absorbed during the first few milliseconds of frying, if an ingredient is fried at the right temperature, it will have little more fat in it (once the crust is removed) then if it had been steamed.” [9]Joachim, David, et al. The Science of Good Food.

Despite the wide variation of culture and culinary traditions in the Mediterranean over the millennia, frying has remained one cooking element common to every region and culture:

“Frying is one of the few characteristics common to the entire Mediterranean area, and to the 3 religions practiced there, Christian, Muslim, and Jewish.” [10]Chiou, A. Virgin Olive Oil as Frying Oil. Page 633.

Frying wasn’t a cooking technique used in the New World before the Spanish. It’s a technique that requires pans that can withstand high-heat, which usually means metal.

Mexican food was dramatically influenced by the introduction of frying.