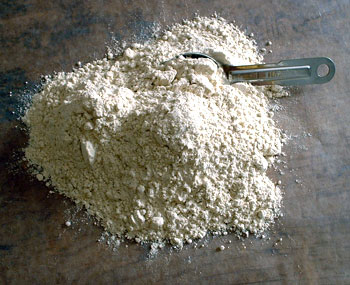 Gluten is a natural protein in some grains, particularly wheat. It is this protein which, when combined with water, make dough elastic and able to hold the gas from yeast and steam during baking which causes bread to rise.

Gluten flour is made from hard wheat that has had both the bran removed (as in white flour), and the starch, leaving it with proportionately more gluten protein. So much in fact, that the protein in gluten flour generally ranges about 75 to 80% (measured dry basis) — compare that with bread flour, with protein ranges of 12 to 14% protein. (Gluten flour is often added commercially to some regular flours to boost the protein content, making them into Bread Flour.)

Gluten flour is generally used in bread recipes where you need to boost the gluten content of the flour being used — whole wheat, for instance — or to give them gluten content, period — flours such as rye or soya, so that they can hold yeast gases and rise.

You generally only need gluten flour in small contents — buying enough to fill a litre or quart-size preserving jar should hold you for a while.

It will not darken the colour of your baked good.

Gluten flour is used in recipes that use flours from primitive wheat grains and non-wheat grains, in order to help those flours capture yeast gases so the bread will rise.

Many Whole Wheat Bread recipes will call for a few tablespoons of gluten flour. Some may call for up to 4 tablespoons (40 g) — either because a large loaf is being made, or the recipe is aiming for an improved crumb and crust (see below.)

It can also be added to recipes to make very crusty bread or crusty pizza doughs.

A tablespoon (10 g) per 2 cups (10 oz / 280 g) of flour added to a regular white bread recipe can make for a more elastic, less crumbly crumb and a crisper crust.

Gluten flour can be used to convert all-purpose flour or plain flour into bread flour.

Note that Canadian all-purpose flours, and King Arthur Unbleached All-Purpose Flour in the United States, don’t need this help: they are plenty strong enough by themselves for bread.

Gluten flour is higher in protein than it is carbohydrates compared to regular flour.

Store refrigerated, or in a cool place, or frozen even — protein goes rancid, and there is a lot of it in gluten flour to go rancid.

This web site generates income from affiliated links and ads at no cost to you to fund continued research · Information on this site is Copyright © 2022· Feel free to cite correctly, but copying whole pages for your website is content theft and will be DCMA'd.
Tagged With: Bread Flour, Wheat Flour