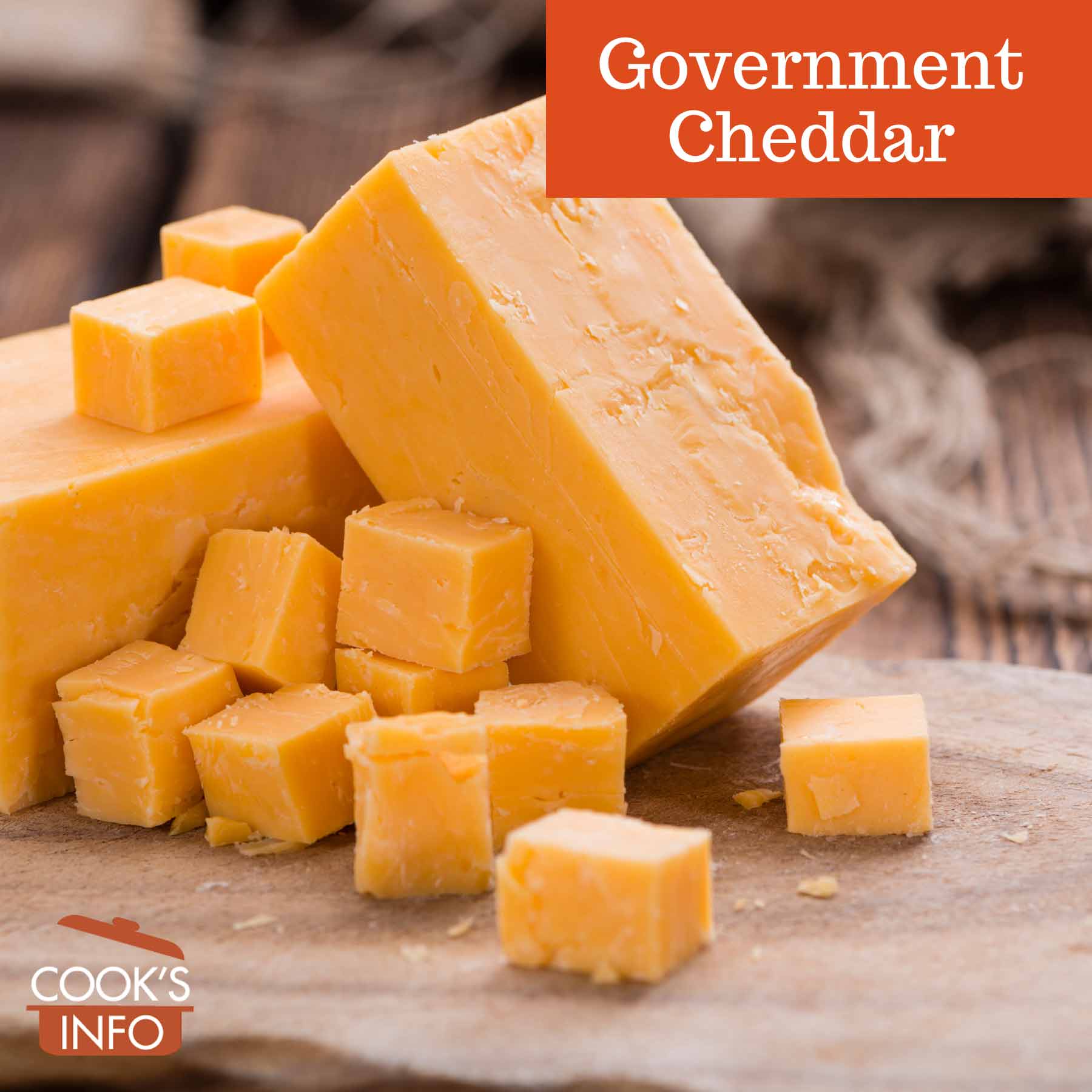 During World War Two, cheese rationing began in the United Kingdom on the 5th of May 1941.

The British government decreed that as part of war economies and rationing, only cheddar cheese made in a certain way would be broadly available to consumers on a national scale.

Almost all milk produced that normally went to make many different kinds of cheeses in creameries large and small was diverted instead to factories to make the cheddar that became unofficially known as “Government Cheddar.” Supplies of cheddar made domestically were supplemented by further cheddar imported from war-time allies.

In some parts of the UK, limited localized supplies of other types of cheese were sporadically available, but for the vast majority of people, if you wanted cheese, you got cheddar.

The introduction of Government Cheddar

Cheese rationing started off in May 1941 with an allowance of 1 oz. of cheese per person per week, which was increased to 2 oz. in June that year. The increase may partly have been owing to retailer feedback about impracticality:

“A number of retailers refuse to supply their registered customers with 1 oz. of cheese at a time on the ground that it is wasteful to cut such a small quantity. The Ministry official pointed out that retailers were not empowered by the Order to refuse to supply 1 oz. of cheese weekly. The Ministry, he said, had issued supplies that would enable shopkeepers to serve four weeks’ rations at a time, but that did not mean that retailers were empowered to sell only in quantities of 4 ozs.” — Prosperity of Cheshire Cheese Industry. Crewe, Cheshire, England: Crewe Chronicle. Saturday, 31 May 1941. Page 7, col. 5.

There was no one, sudden moment when all resources were switched to making cheddar cheese. Wartime manage of dairy was a “fluid” situation, being adjusted to needs and realities as they presented themselves. Small commercially-produced amounts of other cheeses — Lancashire, Wensleydale, Leicester, Derby and Stilton types — had continued for a time after May 1941, with some factories producing them continuing until 1942 before being ordered to close because the milk they needed to operate had been diverted away from them. More of them were ordered to close as well in January 1943:

“The Ministry of Food has served closure notices on 52 creameries and depots to reduce milk distribution costs. These creameries and depots are considered to be redundant now that the Ministry buys all milk. A number of creameries which have formerly made cheese of the Lancashire, Wensleydale, Leicester, Derby and Stilton types are to be closed, and their milk supplies diverted. Some factories which have made Cheshire cheese are threatened. Few Cheddar cheese factories will be affected. Of the 52 closure notices already served, 35 relate to premises in the North-Western region and 14 to premises in the East Midlands region. These depots and creameries are in addition to the 126 creameries compulsorily closed last year. Large supplies of milk which used to pass through depots on their way to the liquid market are now being dispatched to retailing centres.” — Creameries to close. Nottingham, Nottinghamshire, England: Nottingham Evening Post. Wednesday, 20 January 1943. Page 3, col. 4.

A newspaper notice in 1943 indicates that there was definitely the assumption, at that point in time at least, that some Cheshire cheese was still being produced:

“Bradford Food Control Committee yesterday passed a resolution asking the Ministry of Food to consider whether a greater proportion of Cheshire cheese could be sent to Bradford instead of the Cheddar type.” — Leeds, Yorkshire: Yorkshire Post and Leeds Intelligencer. Thursday, 22 April 1943. Page 6, col. 5.

The impact of Government Cheddar

While Government Cheddar helped to get Britain through the war, it also practically wiped out all farmhouse and artisanal manufacture of cheese. Cheeses such as Wensleydale almost disappeared. In the south-west of England before the war, 514 farms were making a vast variety of cheddars. In 1974, just 33 farms were making cheddar, mostly of uniform taste and quality.

“What is particularly striking about the revival of the British cheese industry is its journey from near extinction during the privations of World War II, when the Ministry of Food commanded all dairy production to abandon variety in pursuit of a single cheddar-style national cheese. Nationalization all but crushed the industry, with fewer than 100 independent British cheesemakers still in business by 1945, compared to more than 3,500 prior to World War I.” — Mitch Potter. Cool Britannia rules the whey. Toronto, Canada: The Toronto Star. 9 October 2007. Page A3.

In 1945, cheddar cheese makers, enjoying what was essentially a government-enforced near-monopoly on the market, made a play for higher prices, but backed down after it was quietly suggested to them that it might not be met favourably:

“Cheddar Federation’s Move: The Chairman presented a report on the work of the National Cheese Council. Referring to this year’s agreement, he said that the Cheddar makers had asked for an additional farthing per pound to compensate for increased costs. The secretary had made inquiries and the general view seemed to be that, whilst costs had risen, it would be difficult to prove a case. It was felt that a repetition of the 1944 agreement would react to the best interest of producers. Representatives of the Cheddar Federation were interviewed by their secretary and they had withdrawn their resolution.” — The Cheese Federation in Strong Position. Nantwich, Cheshire, England: The Nantwich Chronicle. Saturday, 5 May 1945. Page 3, col. 8.

By the end of rationing, people had become heartily sick of cheddar and wanted some variety back:

“WHERE is the Cheshire cheese which I looked forward to eating when cheese rationing ended?” asked a reader of “The Yorkshire Observer.” “Why is there still so much Cheddar?” the complaint continues. “We had far too much of it during the war.” A Bradford grocer said he was unable to meet the demand for Cheshire cheese. On his counter at present he has a small amount of it with Wensleydale also prized and Italian Gorgonzola, Dutch Gouda, Danish Blue, and English Stilton, white and blue, and Lancashire cheese, the tang of which does not find great favour on this side of the Pennines.

Another grocer said, “The situation should be easier in a few weeks. You see, during September. the Ministry did not allow milk to the Cheshire cheesemakers. “Since October 1 they have been able to make and sell it freely, but Cheshire cheese must be left to mature for a month or two. Hence the temporary shortage.

“Something similar applies to the Wensleydale cheesemakers. “I know people got tired of Cheddar when it was the only kind available. It was imported. and kept in the Ministry’s store too long. A good English Cheddar cheese is a very good cheese, though it may be too solid for most people’s taste.” — Where has all the Cheshire cheese gone? Bradford, Yorkshire: Bradford Observer. Wednesday, 3 November 1954. Page 5, col. 4.

It would not be until the mid 1990s that the revival of British cheeses began in earnest.

The American government, after the Second World War, also made cheese that people referred to as Government Cheddar. It was distributed in large blocks to the food stamp recipients, along with other dry goods.

Government Cheddar is also used now as a phrase in America to refer to government handouts such as grants and subsidies.

This web site generates income from affiliated links and ads at no cost to you to fund continued research · Information on this site is Copyright © 2023· Feel free to cite correctly, but copying whole pages for your website is content theft and will be DCMA'd.
Tagged With: British Cheeses, British Wartime Food