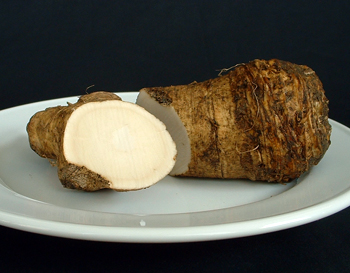 Horseradish is a root vegetable that, like other radishes, is a member of the brassica family.

It is a long tapering root with brownish beige skin on the outside. Inside, it is very white. Above ground, the leaves can grow up to 3 to 5 feet tall (1 to 1 ½ metres.) It will bloom with small white flowers. The seeds produced from the flowers are generally sterile, but this is not a problem for the plant as it propagates itself quite well via its roots. The plant can regenerate from the smallest piece of root left in the ground. The root can grow up to 2 feet (600 cm) down into the soil. A clump of horseradish roots is called a “thong.” Left alone in the ground, the plant is a hardy perennial.

Before chiles came along, it was Horseradish that separated the men from the boys. It has a very hot taste that comes from an oil in it that contains two substances called “sinigrin” and “2-phenylethylglucosinolate.” When cut, cells are crushed, enabling an enzyme called myrosinase to interact with these two substances, releasing the oil. That’s why a Horseradish root has no smell until you start to cut it up. 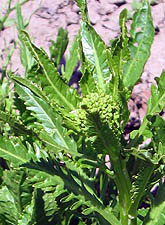 It’s the root that is mostly used, though the greens of the plant can also be eaten.

Only a few fresh roots make it to the stores; they are mostly sold for processing. You can buy horseradish root fresh, grated and preserved in jars, or prepared as a sauce. Commercial processors have to wear masks while processing it owing to the fumes. The horseradish has to be bottled right after grating so that the heat and flavour don’t evaporate.

When buying fresh, choose firm roots that feel heavy for their size, and that are quite hard.

Prepared horseradish is horseradish that has been grated and bottled in vinegar. It is sold in jars, often in chillers at the stores. It will start to lose its heat after a few weeks after opening the jar. This is also called preserved horseradish.

Horseradish is rarely cooked because its flavour disappears when cooked. For this reason, it’s also hard to preserve at home by canning, because the heat used in processing the bottles will destroy the taste.

When grating fresh horseradish, be aware that it can be far hotter than the bottled stuff (depending on how fresh the roots are — some may have been in cold storage a long time before reaching your grocery counter.)

Wash and peel the horseradish root before grating. You can grate by hand or in a food processor. It can make your eyes water as you grate it. Many people prefer even to work with fresh horseradish near an open window. Do not touch your eyes.

You can serve fresh, grated horseradish as is as a side condiment, or make it into a sauce, or use in recipes. If adding Horseradish to a cooked sauce, add at the end so the cooking heat doesn’t destroy the taste.

Horseradish is often served with beef, but it is also good with game and with stronger fish such as salmon, trout or mackerel.

Store in refrigerator in plastic bag for up to a week. Or wash, peel, grate and freeze in sealed bags or containers for up to a few months.

Horseradish is native to Eastern Europe.

In the Middle Ages, horseradish was still thought to have medicinal properties. It was in Scandinavia by about 1200, brought there by monks.

In the mid 1500s, it was called “Red Cole” In England. In 1597, the English writer Gerard had to explain to English readers how the Germans used it as a condiment.

By the mid 1600s, the British lower classes started eating horseradish. By the late 1600s, everyone was eating it with their beef. It was brought to North America by British settlers. It was first grown commercially in America in the Midwest in the 1850s, and first sold in bottles in the 1860s. It was sold in opaque bottles, and acquired somewhat of a dubious reputation because makers were suspected of adulterating it with other things. Heinz sold their first bottle of horseradish in 1869. It was their very first product. They were market innovators by selling it in clear glass bottles, so that consumers could see that the Heinz brand was pure.

One theory holds that the German word, “Meerrettich” (meaning radish that grows by the sea), was misunderstood by English speakers who thought that “Meer” (meaning sea) was “mare”, as in horse. Other schools of thought hold that it’s just called horse because of its large size. Some speculate that what everyone’s too polite to mention is that many large horseradish roots just plain look like a horse’s dong, so the explanation for the name may be the most obvious of all.