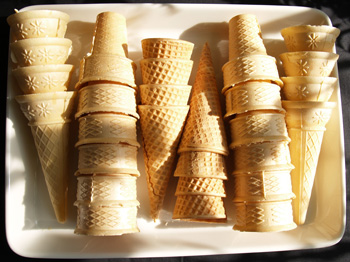 Contents hide
An Ice Cream Cone is a edible cone that ice cream is served in. Traditionally, the outside will have a waffle pattern imprinted on them.

A usual cone is a soft-textured one, made from sugar and flour. They may be long with pointed ends, or short and square with flat ends.

Crispier “waffle cones” or “sugar cones” are also available, though generally a small premium is charged for them. They will be long with pointed ends.

The short, square ones can be used for baking cake batter in, making ice cream cone cupcakes.

Store Ice Cream Cones in a dry, cool place. Generally, you can keep them for one to two years, but when stored for too long they will start to take on a rancid taste.

Wafers in the late 1700s were being rolled into cones to have fruit desserts and whipped cream put in them.

In the 1800s, paper and metal cones were used for Ice Cream in England, France and Germany.

There were also glass dishes called “licks” in England that your Ice Cream would be served to you on by a street vendor. You would eat the Ice Cream right there on the spot, and then hand the dish back. The vendor would wash it in a bucket of water and re-use it for the next customer. It was difficult for a vendor to keep up with washing the glass dishes properly on a busy day. Their use was finally banned by the British government for health reasons in 1926.

In an 1807 painting by Louis-Philibert Debucourt (1755-1832) of a scene at Frascati cafe in Paris, a woman appears to be licking something out of a cone.

An 1820 painting by Neapolitan painter Saverio (aka Xavier) della Gatta ( – died 1830) of a seaside scene in Naples, Italy, shows an ice cream vendor eating ice cream out of cone-shaped glasses. 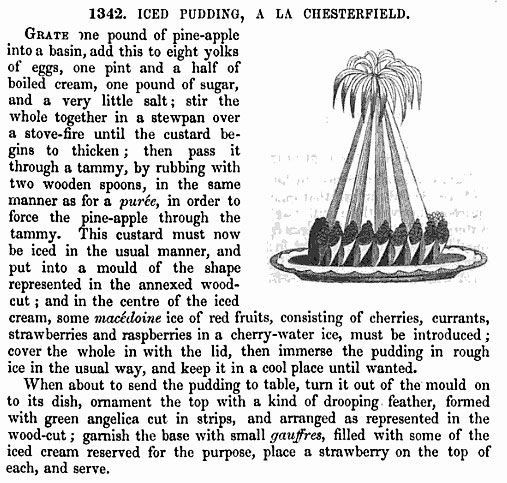 © Denzil GreenIn 1846, Charles Elmé Francatelli advocates using miniature cones to hold ice cream, as a garnish to be used around the base of a larger dessert. An illustration in the book for his recipe for Iced Pudding à la Chesterfield shows this: “Garnish the base with small gauffres, filled with some ice cream reserved for the purpose…”

In her “Mrs. Marshall’s Cookery Book” (London: 1888), Agnes Marshall writes about cones (which she calls cornets) that are baked in the oven and could be filled with cream, ice cream, custard or fruit.

The St Louis Fair in 1904 helped to popularize Ice Cream in cones.

Called a “cornet” in the UK and some parts of North America.