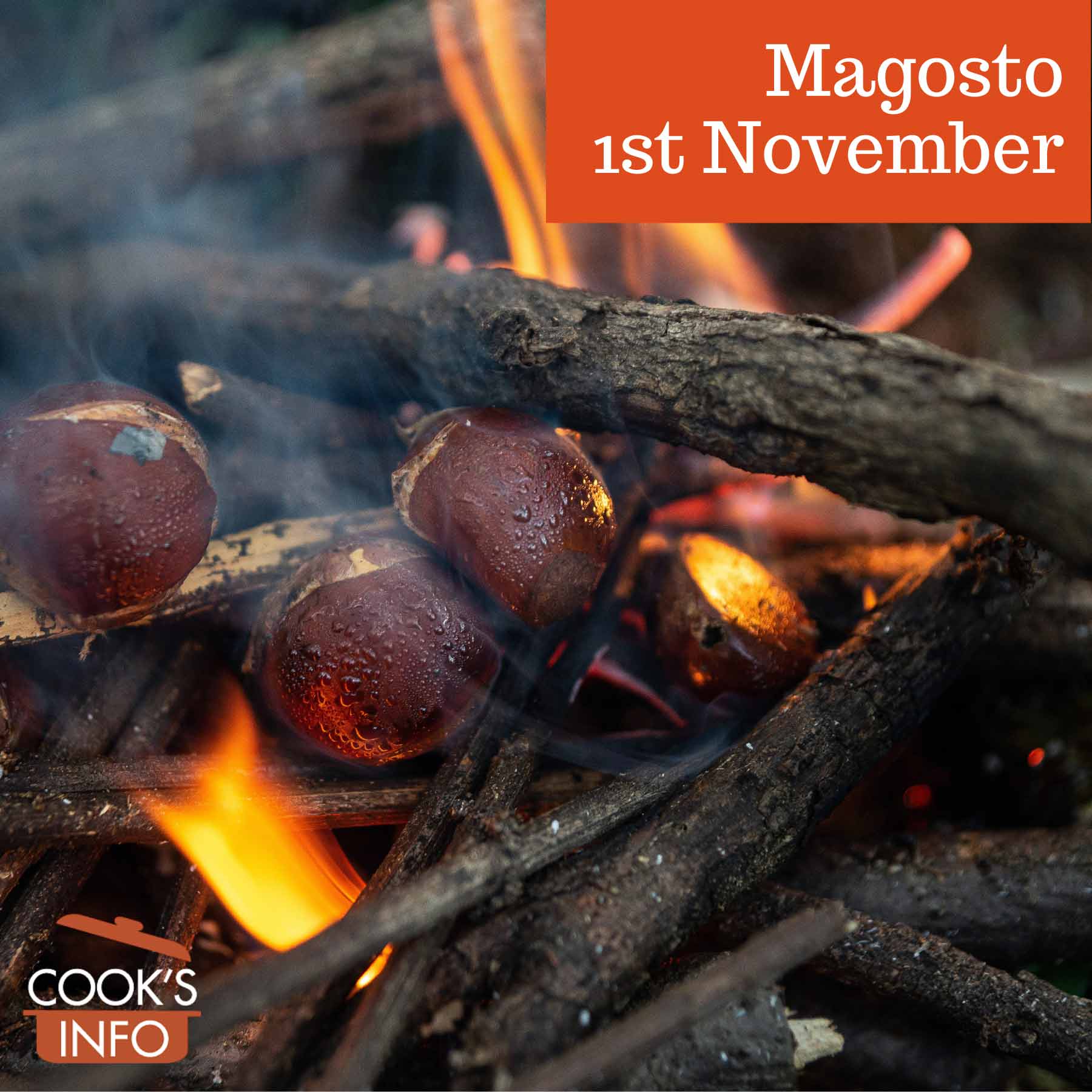 The 1st of November marks the start of the festival of Magosto, held in Portugal, the Canary Islands, and areas of northern Spain such as Galicia, Asturias, Cantabria, and northern parts of Castile-Leon. 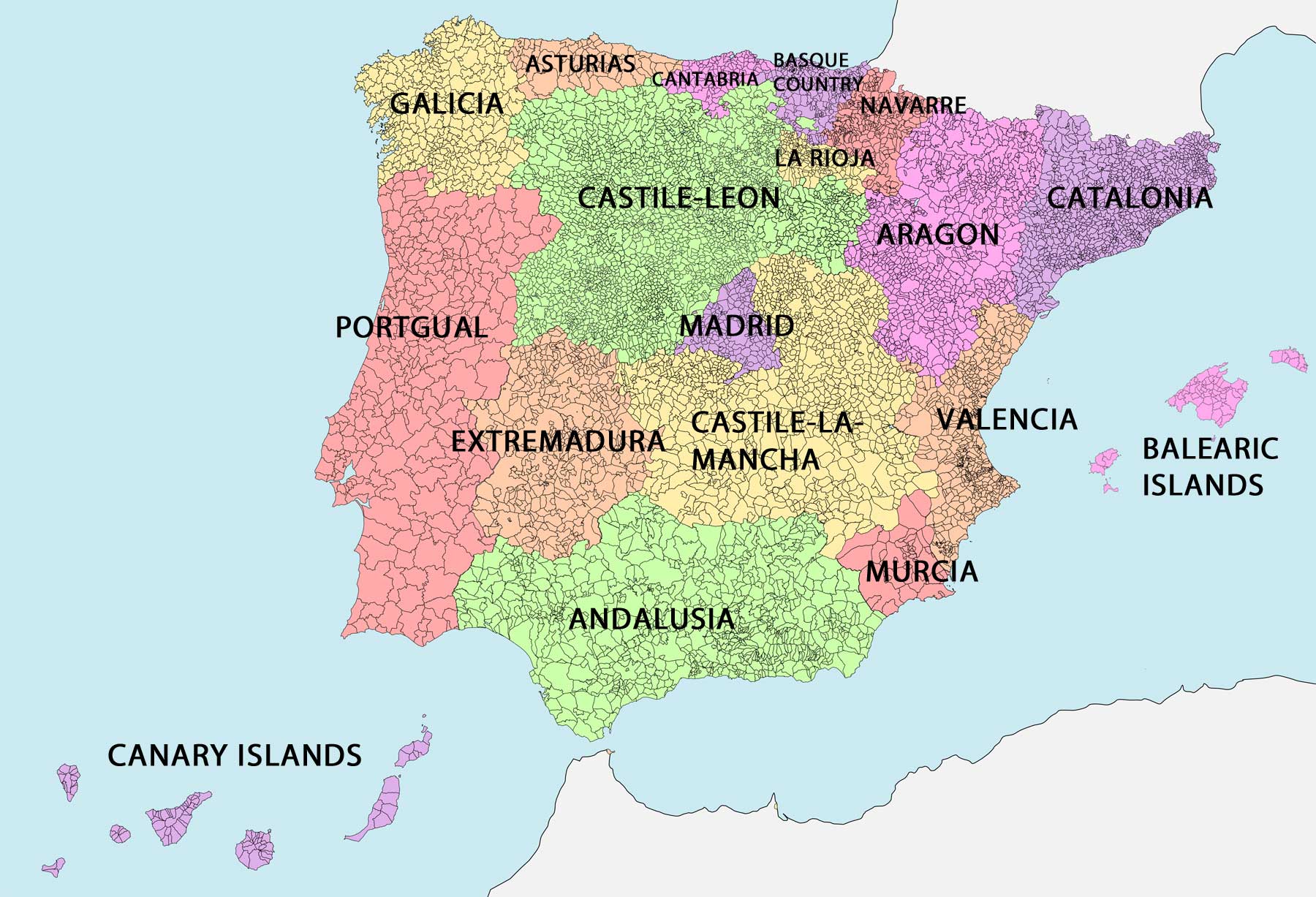 It is an autumn celebration of Thanksgiving for the food the chestnut harvest provides. Before potatoes and corn, the starch that chestnuts provided for chestnut flour, etc., used to be vitally important. Conveniently, the festival also tied in with the end of the agricultural harvest, when people traditionally had more a bit free time to relax.

In practice, it is observed at slightly different times in different areas, depending on when the chestnuts tend to ripen in specific locales.

Typically it is held between All Saints (1 November) and St Martin’s Day (11th November) or around there. In Galicia, on the north-western tip of Spain, it goes on for nearly two weeks. In some locales, it starts earlier in October, particularly on the 31st of October, echoing Celtic Samhain traditions with which it has become enmeshed.

The main attraction at the festivals is chestnuts, which can be boiled, but typically are roasted in pans or drums over open flames. 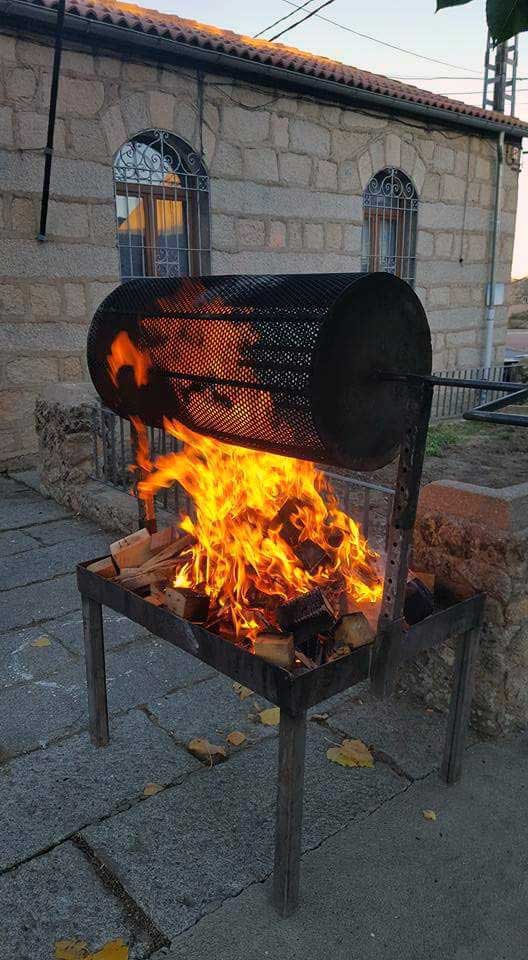 Observances of the festival typically attract both locals and tourists, to whom the various regional festivities are now marketed as part of gastrotourism.

The festivals also offer opportunities to sample other local gastronomic elements, such as the wines, fresh-pressed sweet apple ciders, liqueurs, sausages, and cheeses, as well as music and markets selling traditional food products and handicrafts. In some places, the newly pressed wine of the season is tasted.

Fire features prominently in the festival, which in Spain ties in with the Celtic roots in northern Spain. The Celts believed the veil between the two worlds was thin at this time of year, and this tied in with the Christian observance of All Hallows’ Eve. In homes, the fires were left burning in the fireplaces and food was left out for the dead returning for a visit. In some places in Spain, people smudge their faces with soot from the fires used to roast the chestnuts and also jump over the fires, which is another Celtic tradition. 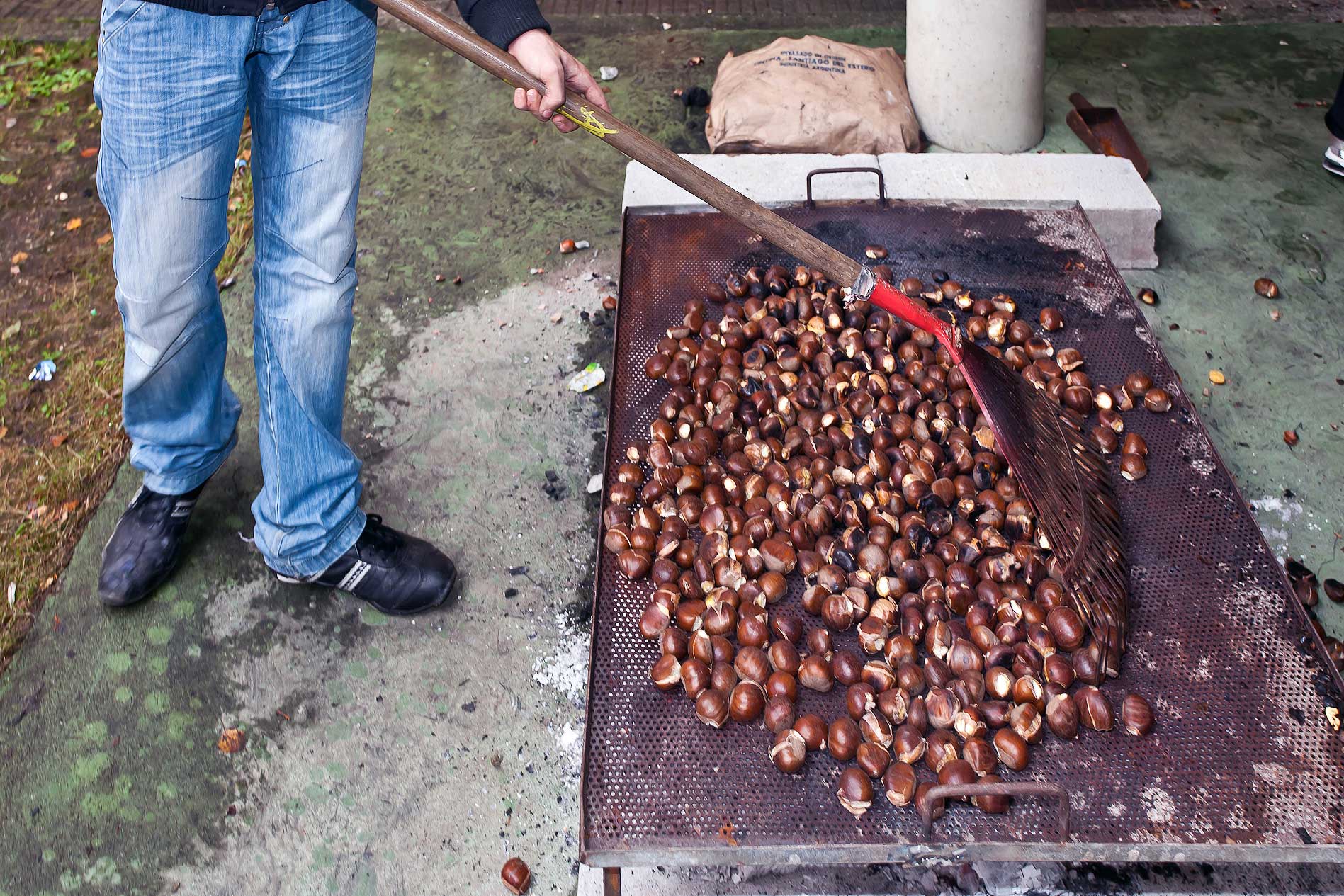 In Catalonia, a slightly different chestnut festival without so many overt Celtic undertones, called the “Castañada” (aka “La Castanyada“), is also held at this time of year, specifically on the 31st of October as part of All Hallows’ Eve observances. [1]”Cataluña celebra la noche del 31 de octubre la castanyada” — Es la Castañada! Catalunyam’agrada. 31 October 2020. Accessed October 2021 at https://www.catalunyamagrada.cat/es/actualidad/es-la-castanada_2138208102.html (“Castaña” is chestnut in Spanish.) Sweet potatoes are often roasted and served at the same time as the chestnuts. 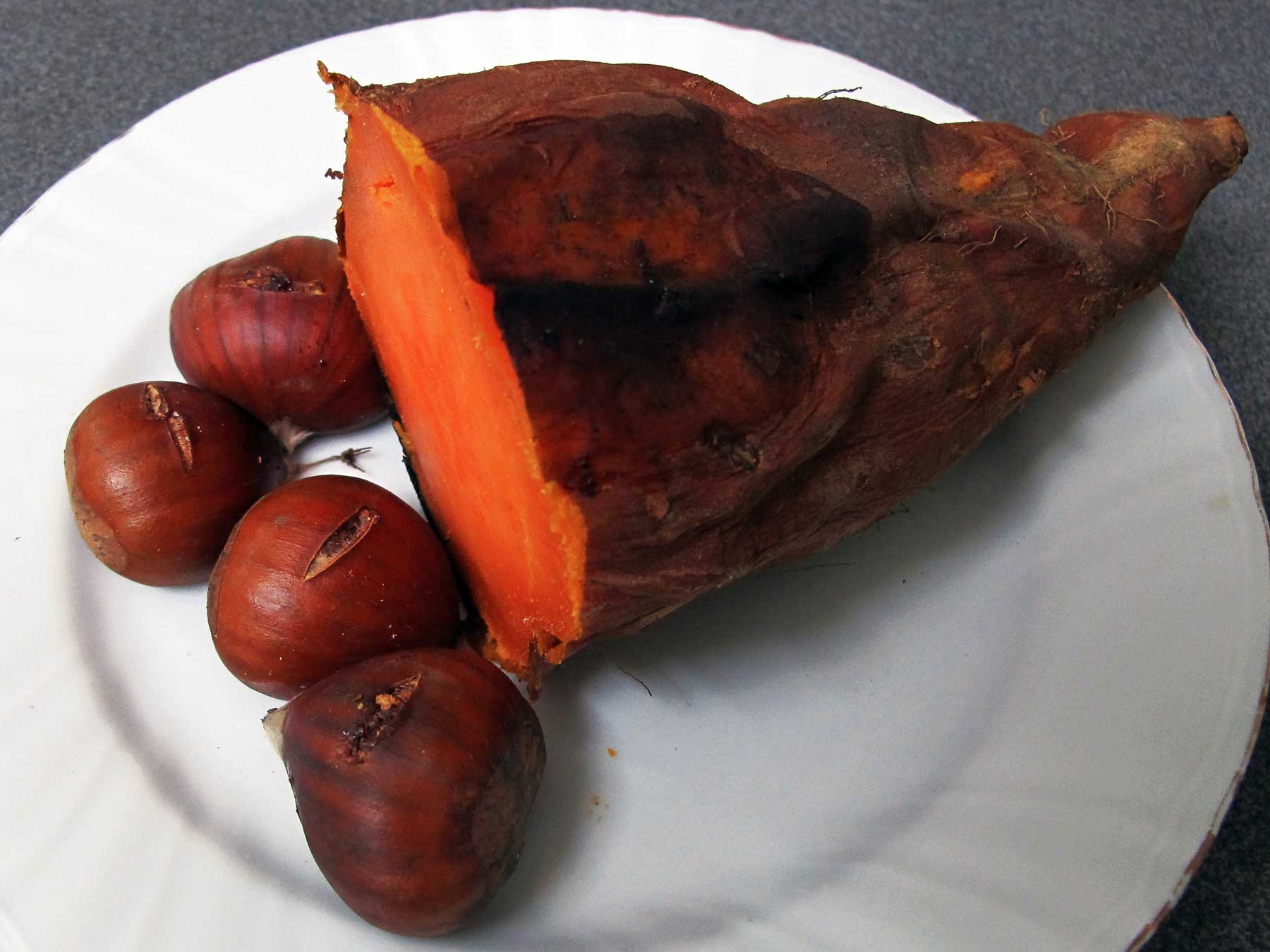 Some people speculate that the name might come from Roman roots, Magnus Ustus / Ustum (great fire), alluding to the Celtic fire rituals at this time of year.

Chestnuts harvest: from the tree and the Magosto. Department of Tourism and Heritage, Province of Salamanca. Accessed October 2021 at http://www.salamancaemocion.es/en/planifica/en-otono/chestnuts-harvest-tree-and-magosto 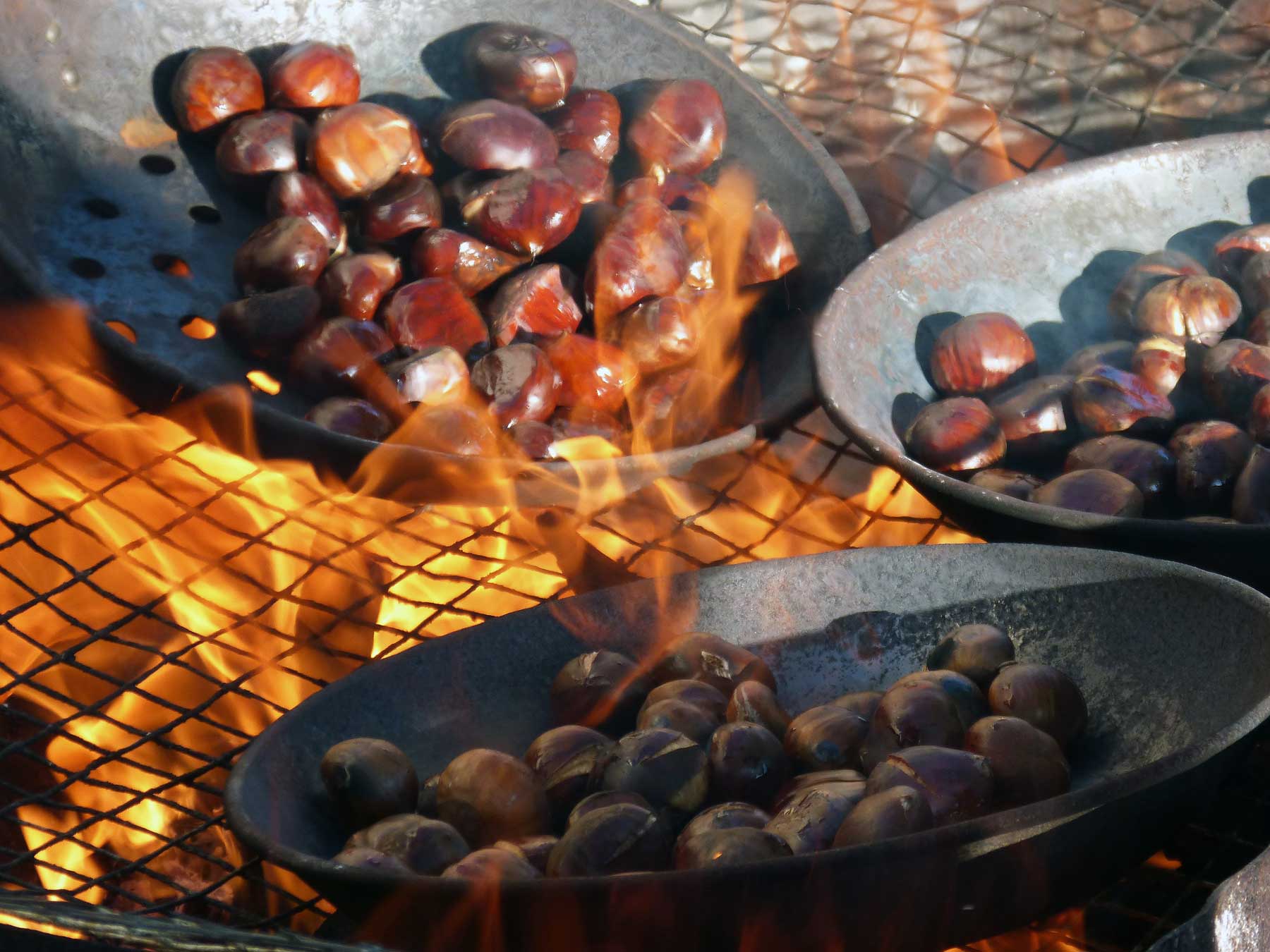 This web site generates income from affiliated links and ads at no cost to you to fund continued research · Information on this site is Copyright © 2022· Feel free to cite correctly, but copying whole pages for your website is content theft and will be DCMA'd.
Tagged With: Water Chestnuts