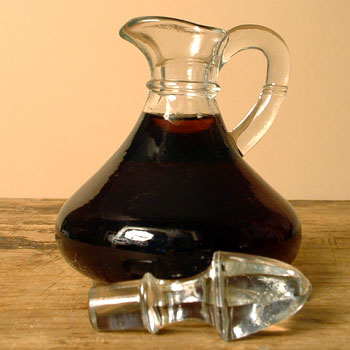 Malt vinegar is very popular in England and Canada. In many people’s minds, it is the best vinegar to put on fish & chips, and on chips (aka French fries) in general.

It is made from malted barley and grain that is mashed, then fermented, often in beech or birch barrels (or in any event, in casks containing pieces or shavings of those woods.)

Malt vinegar is too assertive in taste, and its coloration perhaps undesirable, for most mild vinaigrettes and sauces, but it is good for more robust applications such as marinades, pickling and chutneys.

Alan Davidson writes in the Penguin Companion to Food:

“It has a malty taste which may be disliked in salad dressing but appreciated in pickles. The natural faintly brown colour is usually darkened with caramel.” [1]Davidson, Alan. The Penguin Companion to Food. London: The Penguin Group, 2002. Page 994.

In Canada, there’s a legal definition for malt vinegar:

Good for pickling, though, like cider vinegar, malt vinegar can darken light-coloured fruits & veg (unless you use distilled malt vinegar, which is clear).

If an English recipe calls for vinegar without specifying which type, it’s generally malt vinegar which is meant.

The writer Philip Morton Shand, the grandfather of Camilla Shand, wife to Charles, the Prince of Wales, wrote of malt vinegar:

‘The administering of this corrosive poison in any form whatever to an unsuspecting husband should be made a ground of divorce (without alimony).’ — Philip Morton Shand: A Book of Food. 1927.

The Oxford English Dictionary (3rd edition, 2012) defines alegar as: “Vinegar produced by the fermentation of ale; malt vinegar; a variety of this.

Alan Davidson, creator of the Penguin Companion to Food, sounded somewhat rueful about the loss of alegar as a name for malt vinegar. He felt it was more instructive about the origin of product:

“Malt vinegar used to be called alegar which is a more appropriate name as it is made from an unhopped type of beer.” [3]Davidson, Alan. The Penguin Companion to Food. London: The Penguin Group, 2002. Page 994.