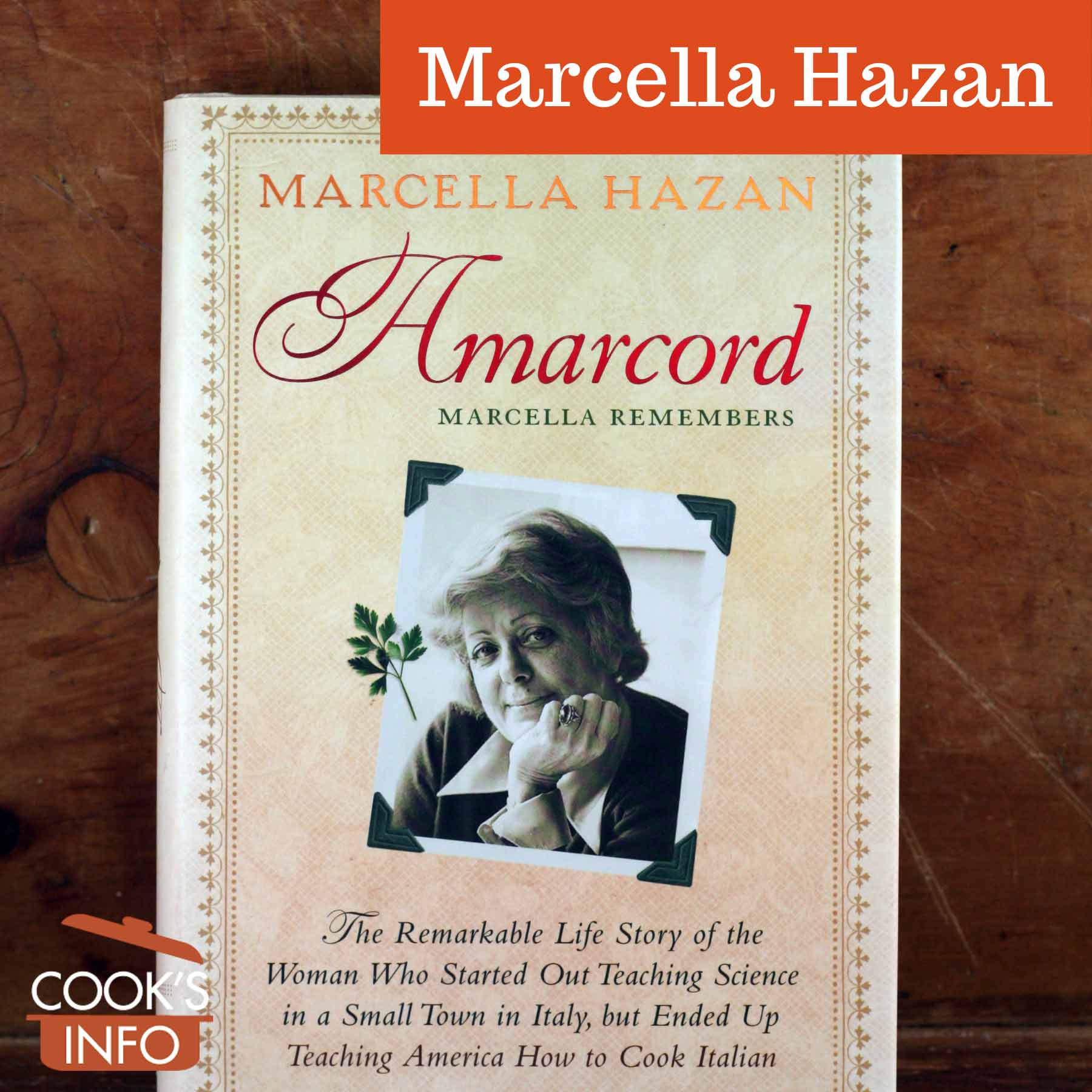 She had a husky voice, like Julia Child, perhaps from her indulgence in Marlboro Light cigarettes (Child was a smoker, too, until 1968.) She did not drink wine. It’s not that she didn’t drink, but when she did, her favourite tipple was Jack Daniels on the rocks. Wine was the domain of her husband, Victor Hazan.

Victor, the wine connoisseur in the family, is a Sephardic Jew, born in Cesena, Emilia-Romagna, on 5 November 1928. In the spring of 1939, his parents wisely sold off everything they had, and immigrated to New York to run a fur business. Victor was 11. After high school, he studied at Harvard. Many of the Jewish-Italian cooking traditions have come through in Marcella’s work as well, including her love of and defence of deep-frying. She wrote:

“…every other cooking method transmutes food, delivering it to us in an altered state. Frying strips away only the rawness, and by its quick, deep heat encapsulates the ingredient with all its intrinsic qualities — the juiciness, the taste, the texture — intact. When, after I was married, I began to cook, the first thing I learned to do and do well was frying.” (from Marcella Says, 2004.)

Marcella Hazan was born as Marcella Polini in 1924, in Cesenatico on the Adriatic coast of Emilia-Romagna, Italy. Her father, Giuseppe Polini, was a tailor. Her mother, Maria Leonelli, was from a line of ex-pat Italians living in the Middle East: the Leonelli’s were tobacco manufacturers in Beirut. When Marcella was two years old, her mother wanted to rejoin her family abroad (they were in Egypt now), so they did, living in Alexandria. When Marcella was seven, she fell and broke her arm. The special medical attention she ended up requiring necessitated the family moving back to Italy permanently.

During the Second World War, her family moved north to Lago di Garda to escape the bombing, though it followed them there on occasions.

Marcella studied first at the University of Padova, then earned a PhD in biology from the University of Ferrara, Italy, commuting to each by train from home. She married Victor Hazan, an American citizen, on 24 February 1955, and followed him back to America in September 1955, arriving in New York on the S.S. Cristoforo Colombo.

Arrival in the United States

She began talking English lessons so that she could get work in the U.S.. Her first job there, in 1957, was as a gum (as in gums in the mouth) researcher at the Guggenheim Institute for Dental Research. The couple moved back to Italy in June 1962, living in Milan and Rome, returning to New York in 1967, taking a small apartment on West Fifty-fifth Street.

In October 1969, Marcella began teaching Italian cooking in their apartment to a group of six women she had met in a Chinese cooking class she took.

Part of her impetus was her impatience with what was passed off as Italian food in America, even in restaurants that purported to be all Italian. She stands for pure Italian cooking with no “English-speaking” influence:

“For one thing, the olive oil was a coarse imitation of what we used to call olive oil back home. And the grocers and vegetable men did not respond with the warmth I had expected when addressed in Italian. Not infrequently, they slipped into a dialect corrupted by dialecticized England that was incomprehensible to me. One of the men was so irritated by my failure to understand him that he ended by insulting me: ‘Ma vai, non sei mica italiana, tu’ (‘Go on, you are not Italian’), he said, offensively using the familiar ‘tu’ form of address.” [1]Hazan, Marcella. Amarcord: Marcella Remembers. New York: Gotham Books. 2008. Page 81.

Some Italian restaurants in America responded to her approach, saying that there’s no point in being rigidly authentic if you have an empty dining room. Others felt that her first two books had a judgmental tone, almost seeming to reach out to slap wrists.

Despite her purist approach, and despite Italian being her mother tongue, all her books were actually written in English. And even though strictly speaking there’s no such thing as “Italian” food — Italy is a country of regions — she treated Italian cooking as a loose category for the various regional cuisines collectively in the country. In struggling to bring authentic Italian cooking to the reader, though, she did stay true to the Italian principle of simplicity. She presented uncomplicated recipes, many with ten ingredients or fewer. Though, to make sure you got them right, she gave very long directions: two to three pages, for instance, for risotto.

Other preferences of hers included a dislike for cinnamon, and a partiality for olive oil from Sicily, particularly brands such as “Madre Sicilia.” She loved Chinese food, and preferred to use Irish butter.

She had many run-ins with editors over the years.

Marcella had a passion for one particular junk food — potato chips:

“Marcella Hazan, author of “The Classic Italian Cookbook,” and teacher at one of New York city’s most popular cooking schools, confessed to a passion for potato chips. “I love them with vermouth aperitifs, which is the way we have them in Italy,” she said. “But there is a special brand I like best and my husband, Victor, will have to call and tell you the name because he always gets them for me.” — Sheraton, Mimi. Food Junkie confessions. NY Times News Service. In Independent Press-Telegram. Long Beach, California. Wednesday, 19 May 1976. Page F2.

“‘We’ll serve the salad course before dessert, not before the entrée, and we won’t serve butter with the bread or lemon peel with the espresso,’ said Hazan, whose goal is to teach Americans how to taste.” — Hayes, Jack. Hazan seeks to conquer midtown Atlanta with new Veni Vidi Vici – restaurateur Marcela Hazan. New York: Nation’s Restaurant News. 30 April 1990.

“I don’t know how to cook measuring.” — Marcella Hazan.

Her last name is pronounced: ha – ZAHN, with the emphasis on the last syllable.

Bianchi, Francesca Cesa. Cooking with the Hazans: the best kept secrets of the Italian kitchen. Atlanta, Georgia: CNN Food. 5 May 2000.

Fiori, Pamela. Counting Her Blessings: for her eightieth birthday, Marcella Hazan has the party of a lifetime. New York: Town & Country Magazine. 1 November 2004.

This web site generates income from affiliated links and ads at no cost to you to fund continued research · Information on this site is Copyright © 2022· Feel free to cite correctly, but copying whole pages for your website is content theft and will be DCMA'd.
Tagged With: American Food, Italian Food