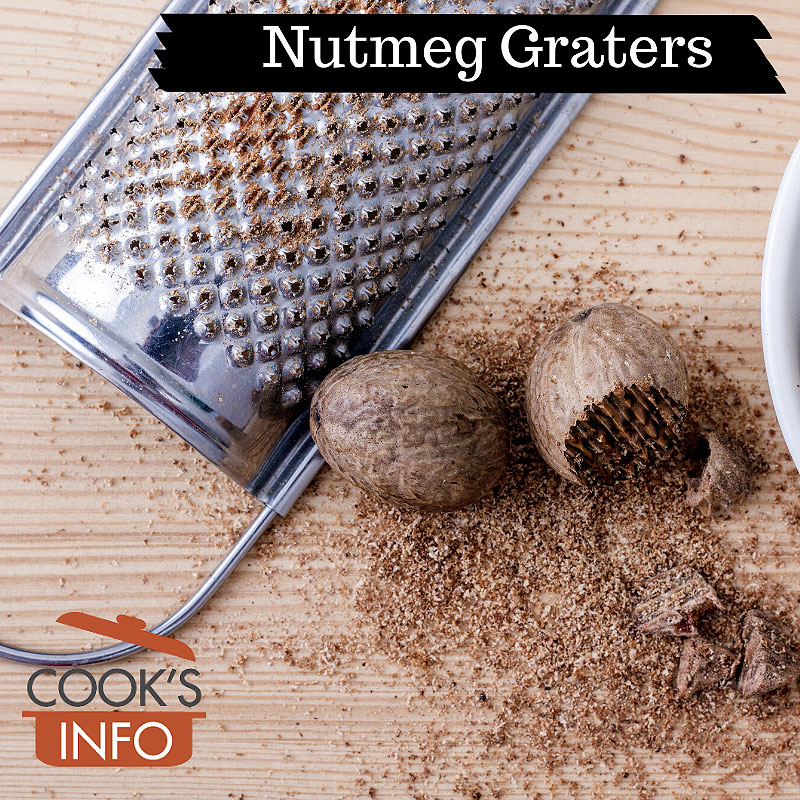 Nutmeg graters are designed to grate portions of a whole nutmeg to a coarse powder. They have fine teeth with which to do this.

Ideally, you are meant to grate nutmeg on an as-needed basis.

The goal of this is to yield freshly-ground nutmeg, whose taste is presumed to be superior to already-ground nutmeg purchased in a tin or jar.

Nutmeg that has been grated is referred to as “grated nutmeg” or “ground nutmeg.”

There have been many different designs of nutmeg graters over the centuries. Some have you rub the nutmeg over a grating surface; others have you turn a handle which causes the grating to happen.

Most of today’s kitchen-use models are inexpensive items that can be bought cheaply at dollar stores. But they have one thing in common: they are sturdy. They have to be, because the nutmeg seed to be rubbed against them is very hard.

Some nutmeg graters are completely flat.

Some are half-cylindrical. They resemble small long low greenhouses in shape, with finely-rasped teeth all over the top rounded part.

Some of these models are hollow, with no back. 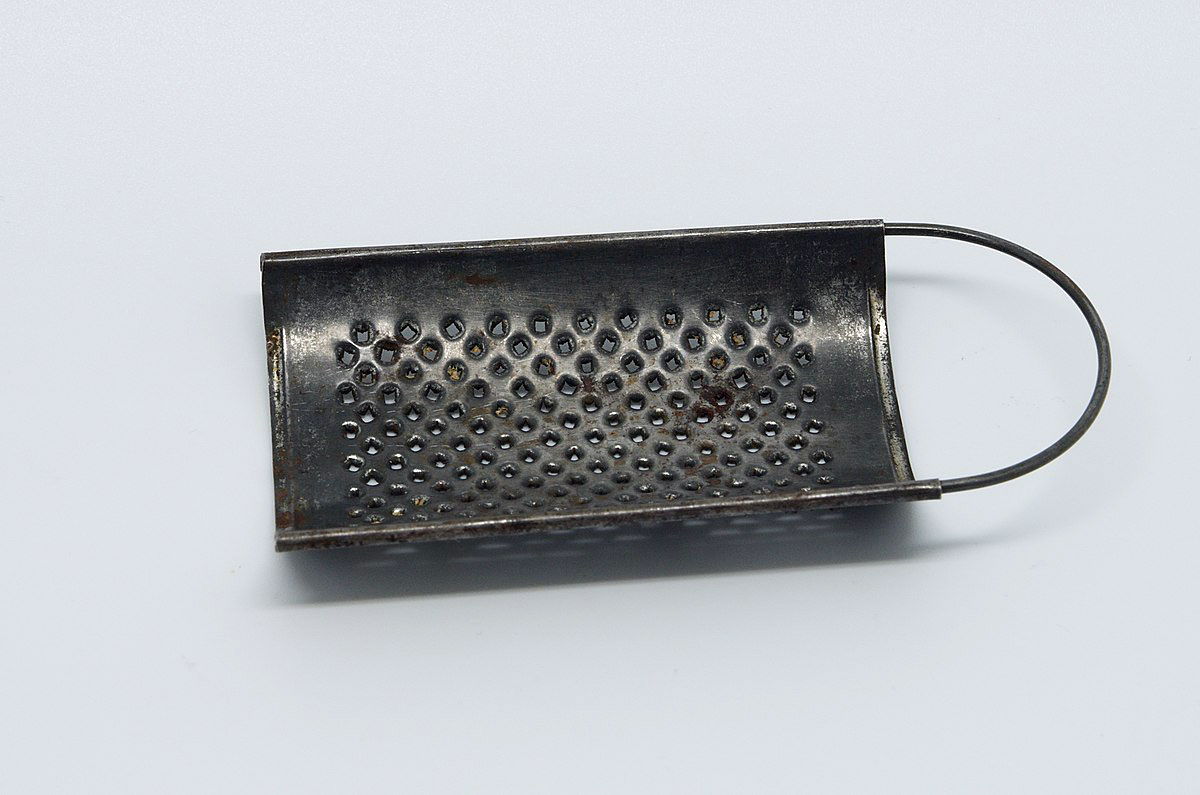 Other half-cylindrical nutmeg graters have a back on them. The back captures the nutmeg as it is ground. At one end of the grater, there is an opening: you direct that end towards where you want the nutmeg to go, and tip the grater to tip the ground nutmeg out. In the other end, there is a small drawer in which you store the whole nutmeg. These are about 13 1/2 cm (5.3 inches) long and 4 cm (1.6 inches) wide (at their longest and widest points), and made of plated tin. [1]Franey, Pierre. Kitchen Equipment: Nutmeg Grinders. New York: New York Times. 18 November 1981. Section C, page 2. 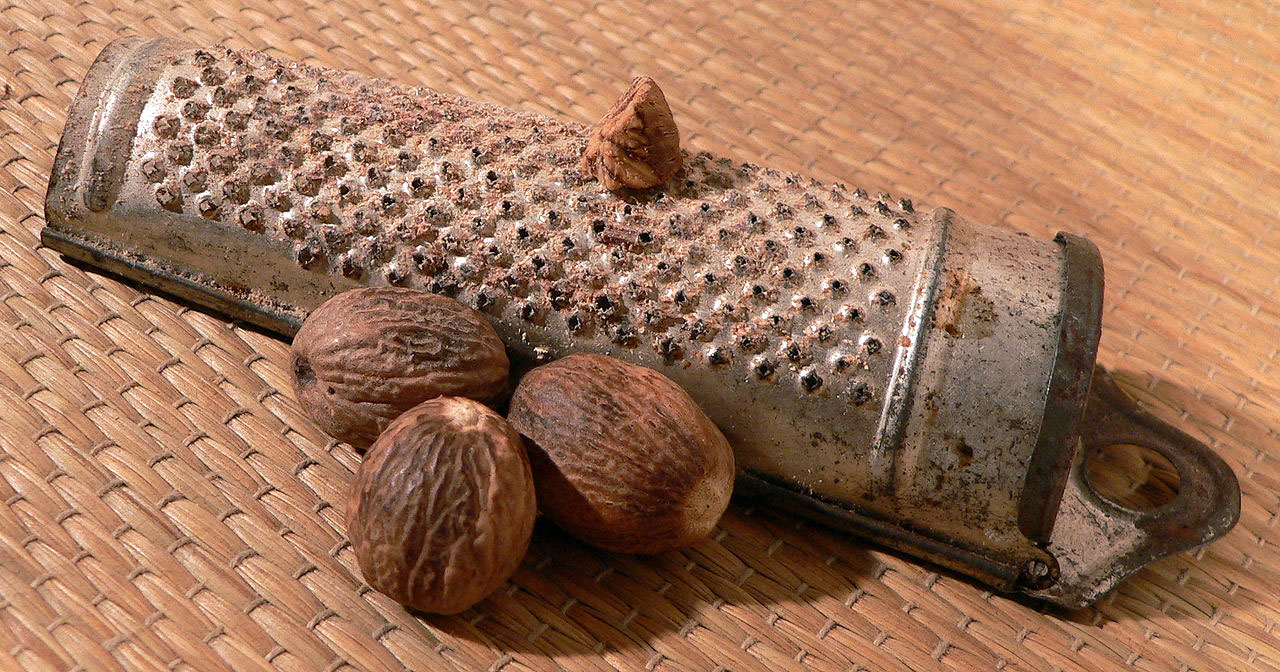 Many of these models have handles or holes at the top so that they can be hung on a wall.

There are also cylindrical models.

Fancier models are rotary operated with a handle. They are often referred to as “nutmeg grinders” or “nutmeg mills.” The Deluxe Food Lover’s Companion says,

“A nutmeg grinder resembles a pepper grinder, except the cavity is designed specifically to hold a whole nutmeg with a small 4-pronged plate at the end of a central,spring-mounted post. The spring serves to keep downward pressure on the nutmeg, forcing it into a sharp blade that, when the crank is rotated, grates the nutmeg.” [2]”Nutmeg graters”. In: Herbst, Ron and Sharon Tyler Herbst. The Deluxe Food Lover’s Companion, 2nd edition. Hauppauge, New York: Barron’s Educational Series. 2015.

Some people prefer using a grinder because it does away with the risk of grating bits of your skin in with the nutmeg.

Nutmeg graters can be difficult to clean. Small bits of nutmeg get stuck in the fine holes, which are very close together and sharp with jagged edges.

As far as we can tell, there is no food safety issue involved if a nutmeg grater is not cleaned. Rather, the concern seems to be that the spice trapped on the grater will get old quickly in the air, losing its taste and aroma, and that cooks don’t want that included in the nutmeg they have freshly ground. As well, some people feel that a compounded build-up of nutmeg on the grater surface can happen over time, evening out the jaggedness of the surface and making the grater less efficient.

Some people clean their nutmeg grater after every use; others, periodically.

They use an old (but clean) nailbrush or hard-bristled toothbrush, reaching for a pin to unclog holes.

Many people never clean their nutmeg grater, at all. They say they only ever use it for that one thing, and that they aren’t concerned if a microscopic portion of nutmeg from the last use gets included with the nutmeg freshly ground this time.

Some people store their uncleaned grater in a sealed plastic bag, to keep the nutmeg embedded on it “fresher” between uses.

Karen Marley, author of SpiceSherpa.com, does not clean hers. She writes, “Nutmeg is also one of those ‘clean’ spices so you aren’t obligated to [do] extra cleaning when you use your grater. Trust me on this one…” [4]Marley, Karen. Nutmeg graters. Accessed October 2019 at http://www.spicesherpa.com/nutmeg-graters

Pierre Franey, writing for the New York Times, said he cleaned his only rarely: “I clean my nutmeg grater only very rarely for fear of inducing rust. When a grater is washed it should of course be dried diligently.” [5]Franey, Pierre. Kitchen Equipment: Nutmeg Grinders.

A nutmeg grater can be used to grate nutmeg for use as an ingredient in a mixture for a food item, such as a baked good, or a quiche.

It can also be used to grate nutmeg as a garnish.

A nutmeg grater is an essential part of a toolkit for bartenders, who use them to grate fresh nutmeg as an aromatic garnish for drinks:

“Nutmeg grater: This tool is indispensable for garnishing drinks such as hot toddies or punches such as Whiskey and Ginger Punch with freshly grated nutmeg.” [6]Mautone, Nick. Raising The Bar. New York: Artisan Books. 2004. Page 19.

Nutmeg graters can also be used for grating cinnamon sticks, block chocolate, ginger, citrus zest or hard cheeses such as Parmesan and Romano. Most people, however, reserve their use for nutmeg alone — if only because then that way, they feel that they never have to clean them. 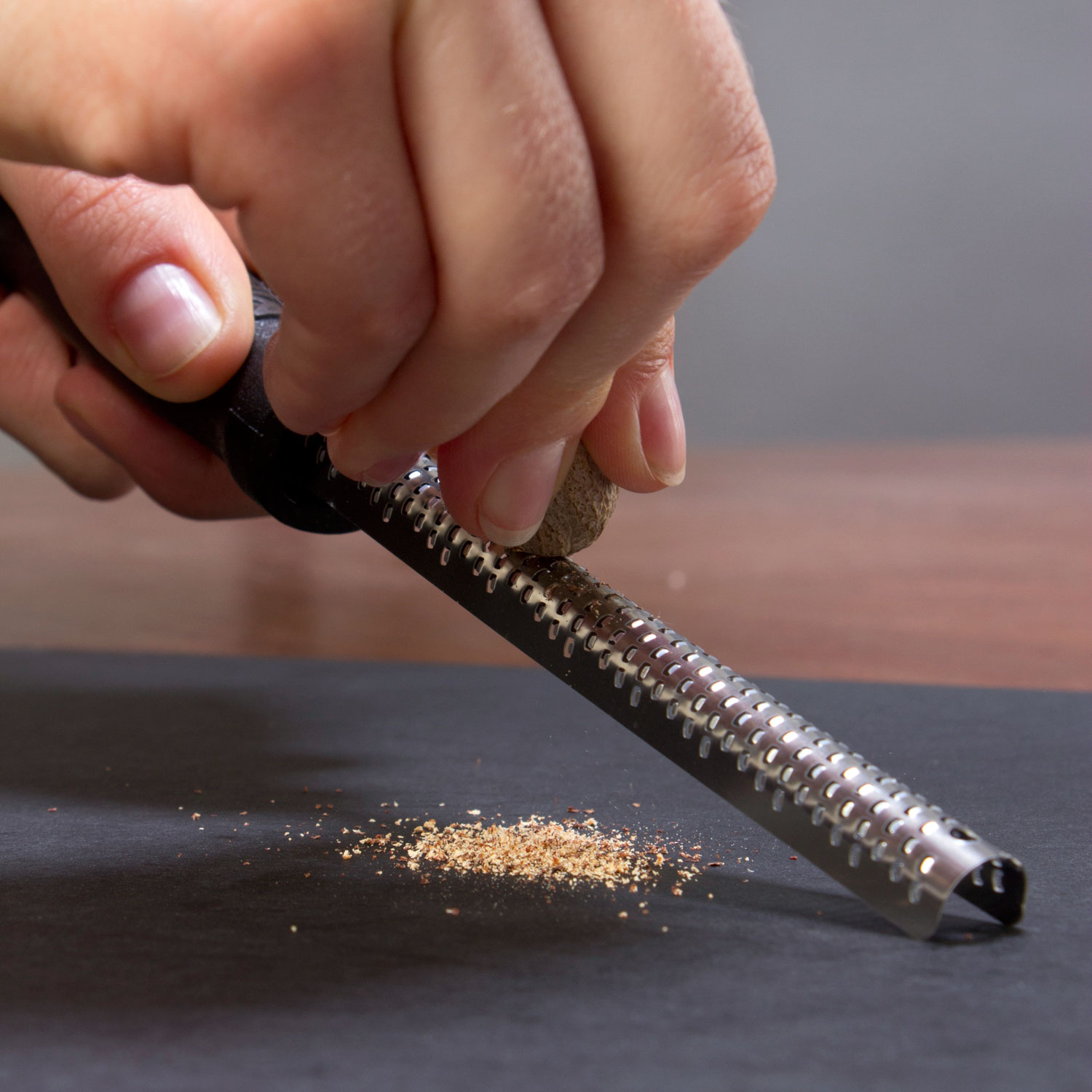 The Romans had nutmeg, but it’s unclear if they had dedicated graters for it.

The earliest nutmeg graters in “modern times” originated in the early 1600s in England. Only the very wealthiest had them (indeed, only they could afford nutmeg to start with.)

Pocket ones for the gentry to include in their travelling tableware sets emerged in the mid 1600s. The first ones were just cylindrical silver graters, with a solid silver tube acting as a case to store them in. 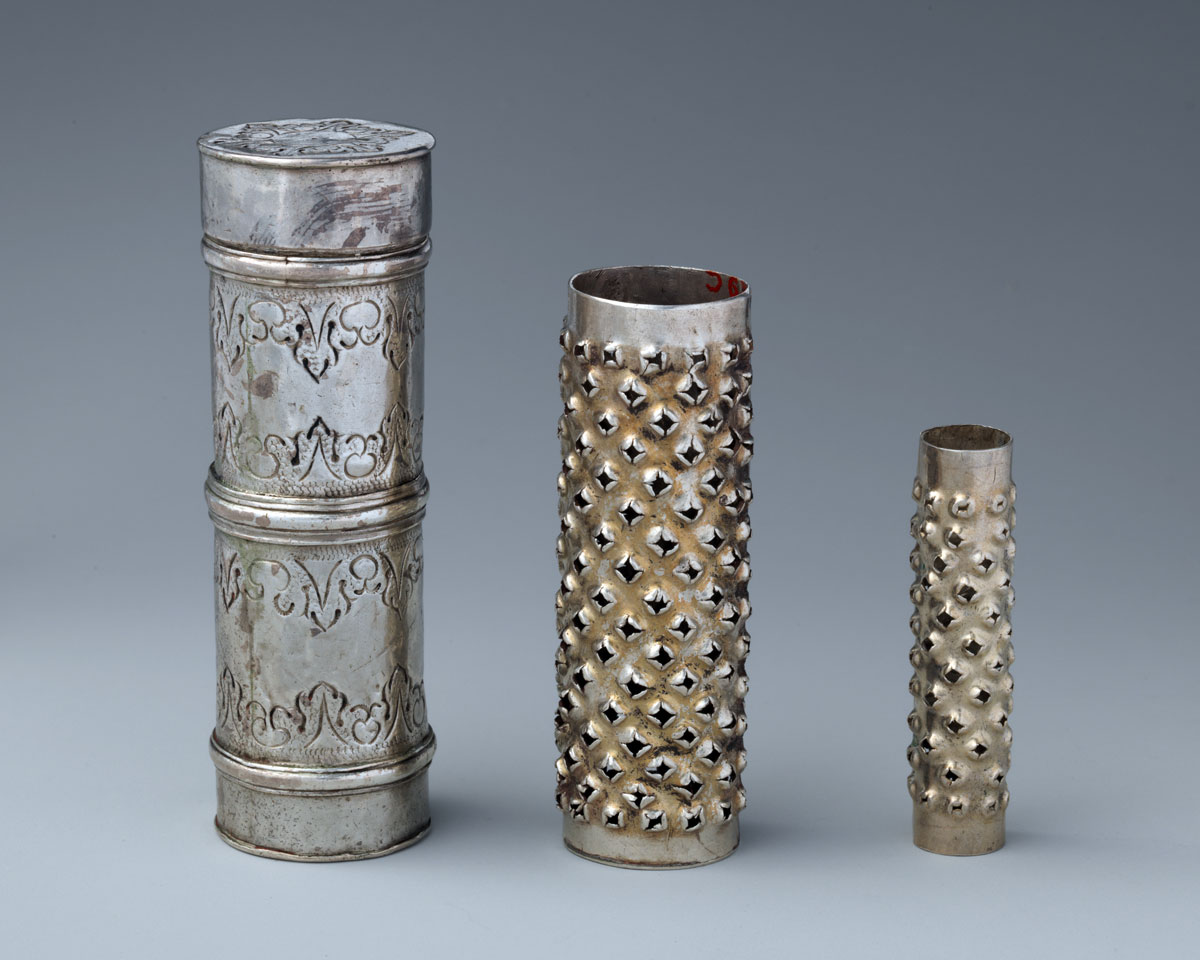 Later, elaborately decorative ones emerged made from silver, gold, ivory, brass, and enamel.

In the 17th and 18th century, gentlemen would carry their own small, personal silver nutmeg grater with them. This allowed them to freshly grate their own nutmeg into fashionable drinks such as punches, nogs, and hot mulled wine.

“Nutmeg graters first appeared in the mid 17th century, with greater refinement in dining and a wider ownership of silver for the table. They were either carried in the pocket or included in a travelling canteen that might also contain cutlery, a beaker and a corkscrew. The graters reached the height of their popularity in the next century. Cheaper, thinner gauge silver, new manufacturing techniques and greater prosperity led to an enormous growth in items of small personal silver. Nutmeg graters were then made in a variety of forms, from cylindrical, circular or oval boxes to more unusual designs such as hearts or shells, to express the owner’s taste and individuality… [Nutmeg] was an important ingredient of punch and hot mulled wine.” [7]Nutmeg grater description (E. Robinson and T. Phipps). London: Victoria and Albert Museum. Accessed October 2019 at https://collections.vam.ac.uk/item/O78651/nutmeg-grater-e-robinson-and/ 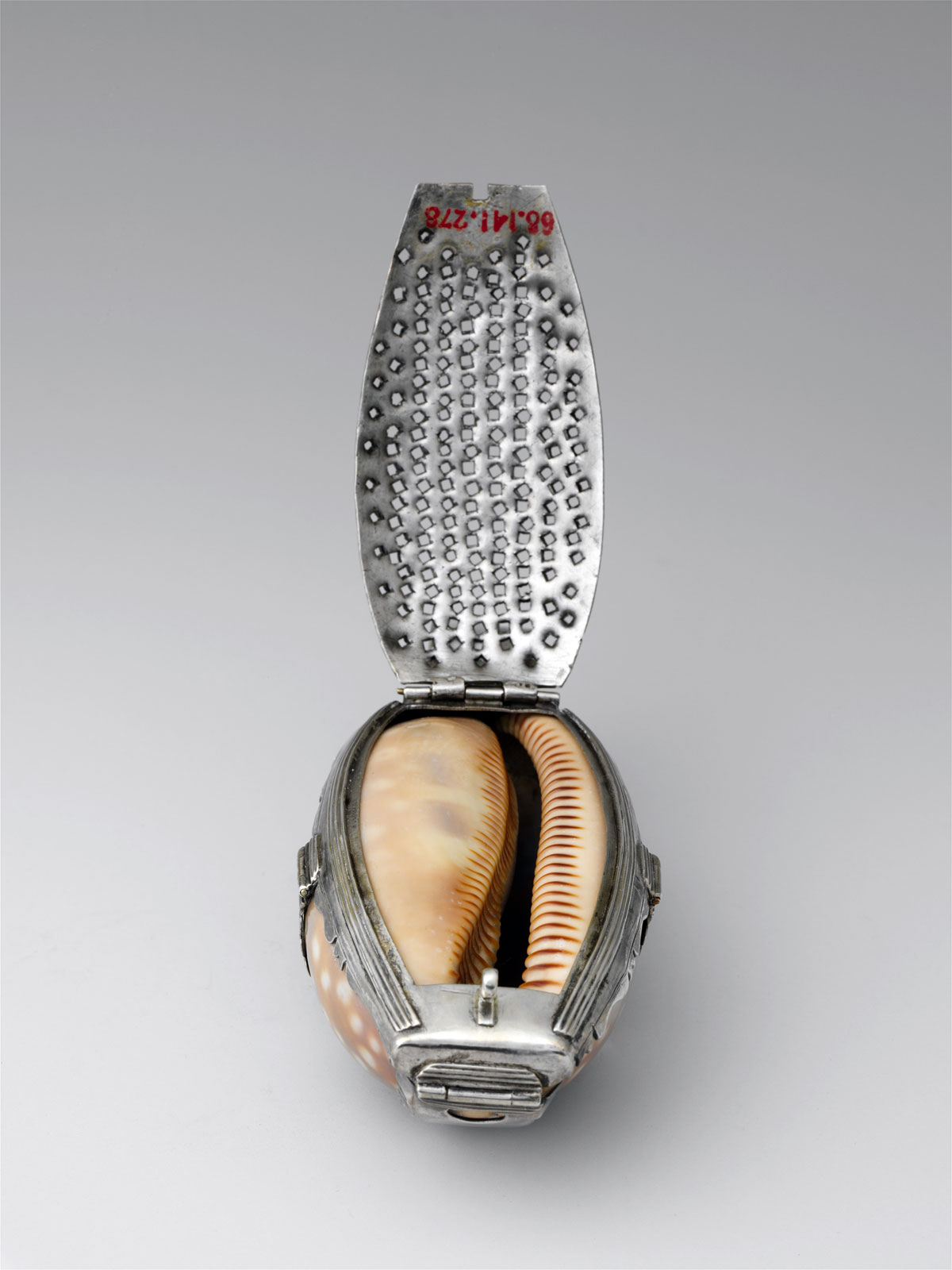 Personal silver nutmeg grate circa 1690. Gentleman would carry one with them so they could grate fresh nutmeg into their beverages such as nog or punch. Metropolitan Museum of Art / wikimedia / 2017 / Public Domain

Charles Dickens carried his personal nutmeg grater about with him:

“Possibly the most popular of all graters from the eighteenth century was the nutmeg grater. In their crudest form, they were simply sheets of tin or iron pierced with holes, others were mounted on boards, with a small drawer to collect the nutmeg filings. Often nutmeg graters came in small lidded boxes, or pocket treens, which could be carried around and conveniently used when out and about to sweeten cakes, puddings or milky drinks. It is said that Charles Dickens was often known to carry one such luxury item around with him. And at around £400 for pound of nutmeg in today’s money, the spice was still very much a luxury item during the eighteen and nineteenth centuries.” [8]Kay, Emma. Vintage Kitchenalia. Gloucestershire, England: Amberley Publishing. 2017. Google Ebook edition.

By the early 1700s, simple ones started to emerge for use by the lower-orders toiling as cooks in the kitchens as well. The kitchen ones were made of wood, iron or tin.

As the 1800s progressed, the price of nutmeg started to fall, thanks in part to new plantations in places such as Grenada.  As the spice became more accessible, recipe writers responded by incorporating it into recipes. By the mid-1800s, approximately 20% of all recipes of the time called for nutmeg, and so the demand for kitchen nutmeg graters grew accordingly. With the inventiveness of the Victorian age, technology came to play a hand in devising more mechanized nutmeg graters to make the task easier for cooks. 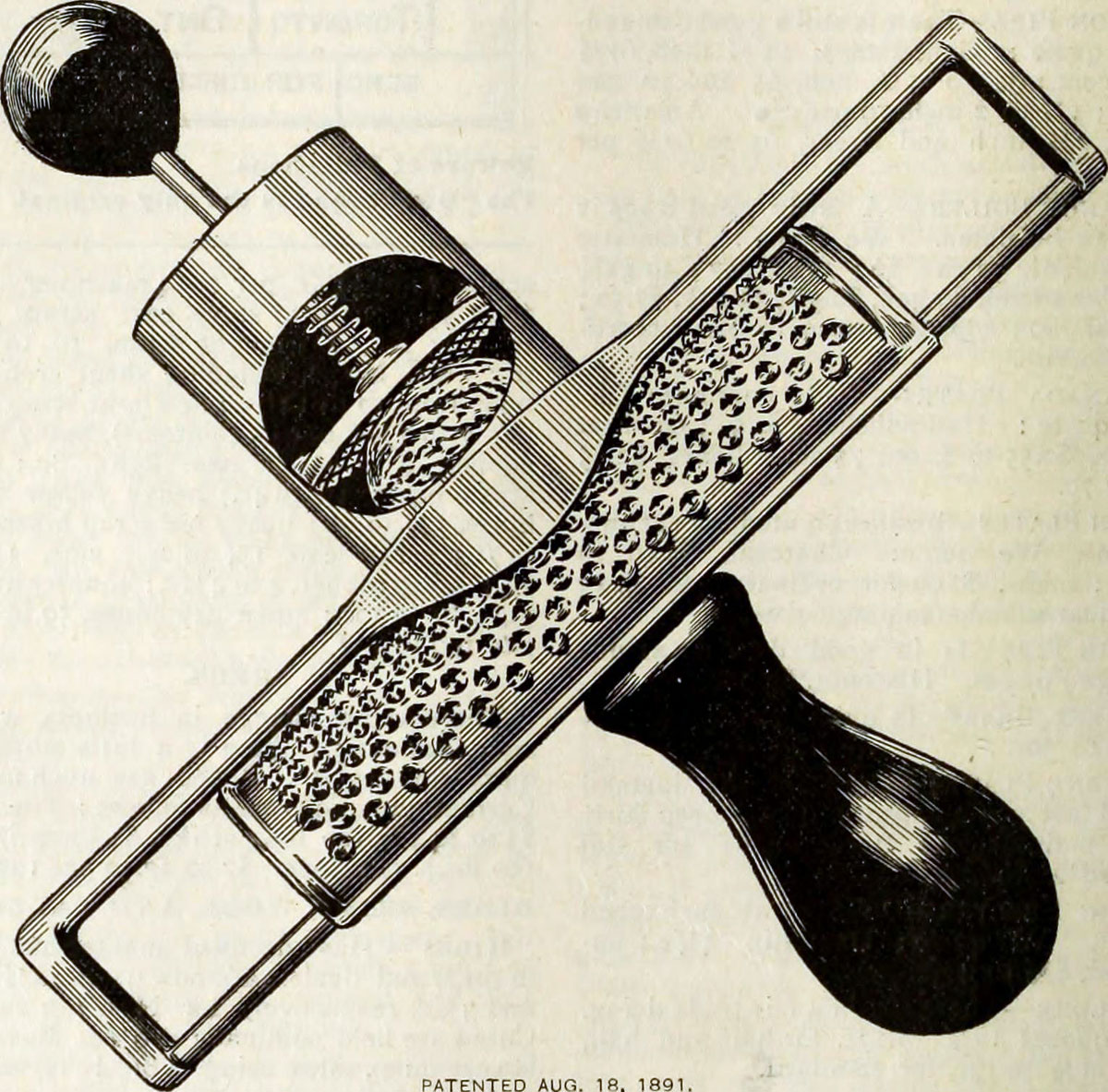 The Nutmeg Grater: A Kitchen Collectible, And So Much More. Journal of Antiques and Collectibles. 19 June 2016. Accessed October 2019 at http://journalofantiques.com/features/nutmeg-grater-kitchen-collectible-much/

This web site generates income from affiliated links and ads at no cost to you to fund continued research · Information on this site is Copyright © 2022· Feel free to cite correctly, but copying whole pages for your website is content theft and will be DCMA'd.
Tagged With: Nutmeg