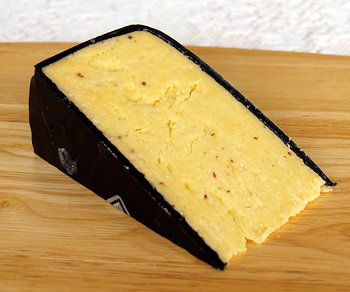 10% of the cheese mixture is “Old Speckled Hen” bitter ale made by the Greene King Brewery.

The cheese is made by North Downs Dairy in Wincanton, Somerset, England, as part of their line of cheeses branded as “Pilgrims Choice.”

Old Speckled Hen Cheese appeared on the market in June 2004. Though made in England, it was actually first launched in America.

By the spring of 2005, the company had made it available to European and Asian customers as well.

This web site generates income from affiliated links and ads at no cost to you to fund continued research · Information on this site is Copyright © 2022· Feel free to cite correctly, but copying whole pages for your website is content theft and will be DCMA'd.
Tagged With: English Cheeses, English Food