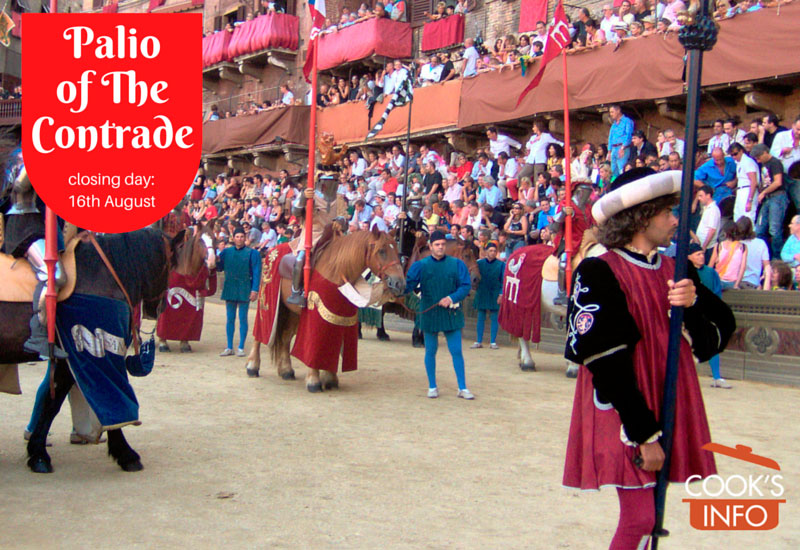 The 16th of August is the last day of the Palio contests held in Siena, Italy.

The phrase “palio of the contrade” means “prize of the districts.”

The “palio” (meaning “prize”) is won through horse races held in honour of the Virgin Mary. “Contrade” means “districts”, as in, neighbourhoods of the city, and it is the districts who compete against each other for the prize of a silk banner.

The races take place in the centre of Siena, in the huge open area called the “Piazza del Campo.” The races consist of three laps around the Campo, and last only about 90 seconds.

There are two Palio sessions held every year; each lasts 4 days. The first, dedicated to the Madonna of Provenzano, runs from the 29th June to the 2nd July inclusive, and the second, dedicated to the Madonna of the Assumption, from the 13th to the 16th August inclusive. The big race of the first session is on the 2nd of July; the big race of the second session is the 16th of August. These two big races are held at 7:30 in the evening.

It is a time also of great outdoor communal feasting in the city.

Each Palio is accompanied by many celebrations, special dinners and ceremonies.

In the Palio, the different neighbourhoods of Siena compete against each other for the prize of a silk banner. There are seventeen neighbourhoods in Siena, most named after an animal: Caterpillar, Dragon, Eagle, Forest, Giraffe, Goose, Owl, Panther, Porcupine, Ram, She-Wolf, Shell, Snail, Tortoise, Tower, Unicorn and Wave. Each neighbourhood has its own Palio museum, making for seventeen of these in total around the city.

Only ten of the districts run in each of the two races each year. The seven that didn’t get to participate the previous year are automatically in, with the remaining three selected by draw about six weeks in advance. Each Palio is treated separately; a different ten teams race in the second one, selected by the same rules.

In the weeks before, each participating neighbourhood will rev up its supporters with events, parades, etc. Many of the supporters and participants dress in traditional medieval clothing. Trials are held in the days before the Palio starts, to give the jockeys time to get to know their horses and to help build up excitement for the big event.

During the trials, each of the 10 neighbourhoods chooses its largest open public space and sets out 50 foot tables in rows for a meal of pasta, meat and vegetables. The meals are hosted by restaurants. Large banquets, called the “Cena della Prova Generale“, are held the night before each final, big race.

The winning team parades the banner to a church (Santa Maria di Provenzano in July and the Duomo in August) and sings a Te Deum there. The banner is then paraded by them around the city and the partying begins in earnest.

The winning neighbourhood holds its victory banquet sometime around the end of September. 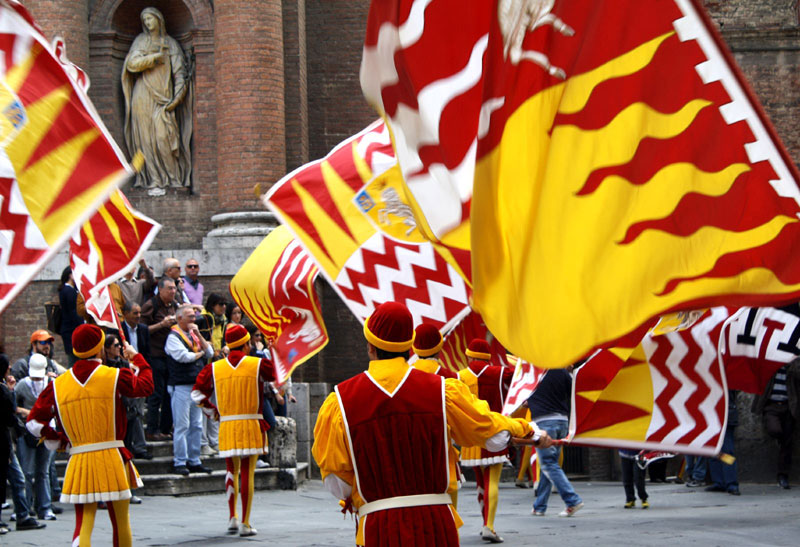 In the Middle Ages, the neighbourhoods of Siena really did fight with each other. Each was an armed camp, owing allegiance to different minor nobles.

Even today, some people in Siena discourage their children from marrying someone from a different neighbourhood.

To this day, it’s best not to wear one neighbourhood’s team colours into another neighbourhood; fist-fights can erupt.

“Contrada” is a district in the city; “contrade” is the plural, meaning therefore of course “districts”. 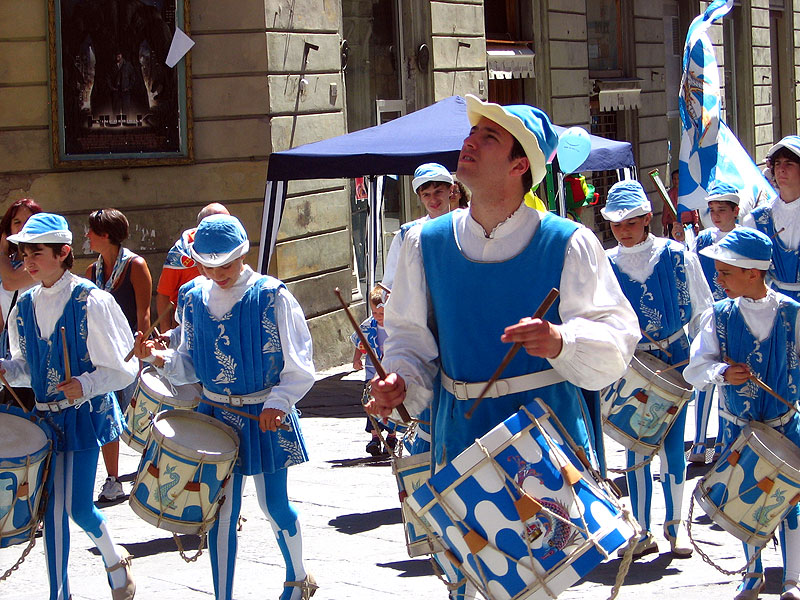 This web site generates income from affiliated links and ads at no cost to you to fund continued research · Information on this site is Copyright © 2022· Feel free to cite correctly, but copying whole pages for your website is content theft and will be DCMA'd.
Tagged With: Tuscan Food