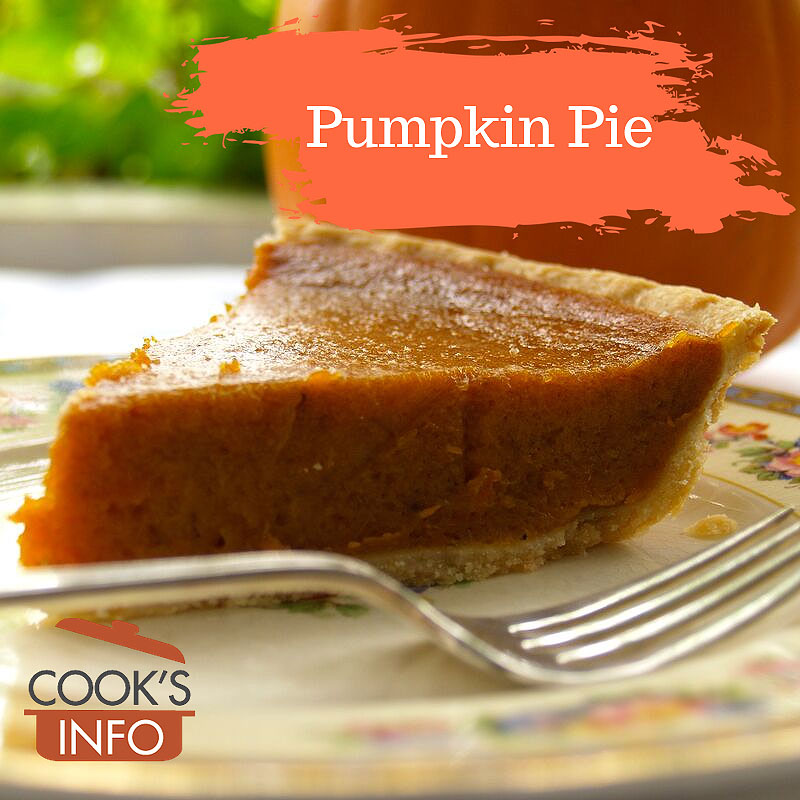 Contents hide
Pumpkin Pie is an open-faced custard-based pie with just a bottom shortcrust crust, and no top crust.

The custard is orangish-brown, and can be lighter or darker, depending on whether you use dark or light brown sugar.

The custard base is made from beaten eggs, milk or cream, sugar and spices.

Many recipes call for evaporated milk, or for fresh milk to be scalded first. Some make Jewish pareve versions using soy milk or coffee cream (such as Rich’s.)

The main flavouring is done with puréed pumpkin. This puréed pumpkin must come either from tins of purchased pumpkin purée, or from pie pumpkins that you stew down and purée yourself — which is to say, don’t try to use a Jack-O-Lantern type pumpkin. Though a few enthusiasts still make their own, most people now use puréed pumpkin that they bought in a tin from the store. (See entry on pumpkin purée.)

The traditional spices are allspice, cinnamon, cloves and ginger.

Pumpkin pie is so omnipresent in the autumn in the United States and Canada that everyone is always looking for a novel version, such as using creamed cheese or melted ice cream instead of the milk. Some vegetarian recipes use tofu instead of milk and eggs. Some versions use a graham wafer crumb pie crust, others flavour it with espresso. Still others make it as a true custard pie, with no crust at all.

In the States, some people like to sprinkle a layer of toasted, ground pecans in the bottom (press them into the crust) before pouring the filling in.

In Canada, some people like to serve slices of it drizzled with maple syrup.

Pumpkin pie is served on Thanksgiving in both the United States and Canada. Many people like to serve it again at Christmas, just a few weeks later.

Cracks appearing in the surface of the baked custard can indicate either that the filling was overmixed, or that it was baked too long.

Many people swear by the recipe on the side of Libby’s canned pumpkin purée (which 100% Dickinson pumpkin).

The famous Libby’s pumpkin pie recipe on the can is:

Note that it doesn’t call for nutmeg, but many people say they add it anyway.

In Canada, a popular name-brand equivalent of the Libby’s brand is E.D. Smith, which is also 100% Dickinson pumpkin (as per the company website, 2021.) The pumpkin pie recipe on the E.D. Smith tins is slightly different: 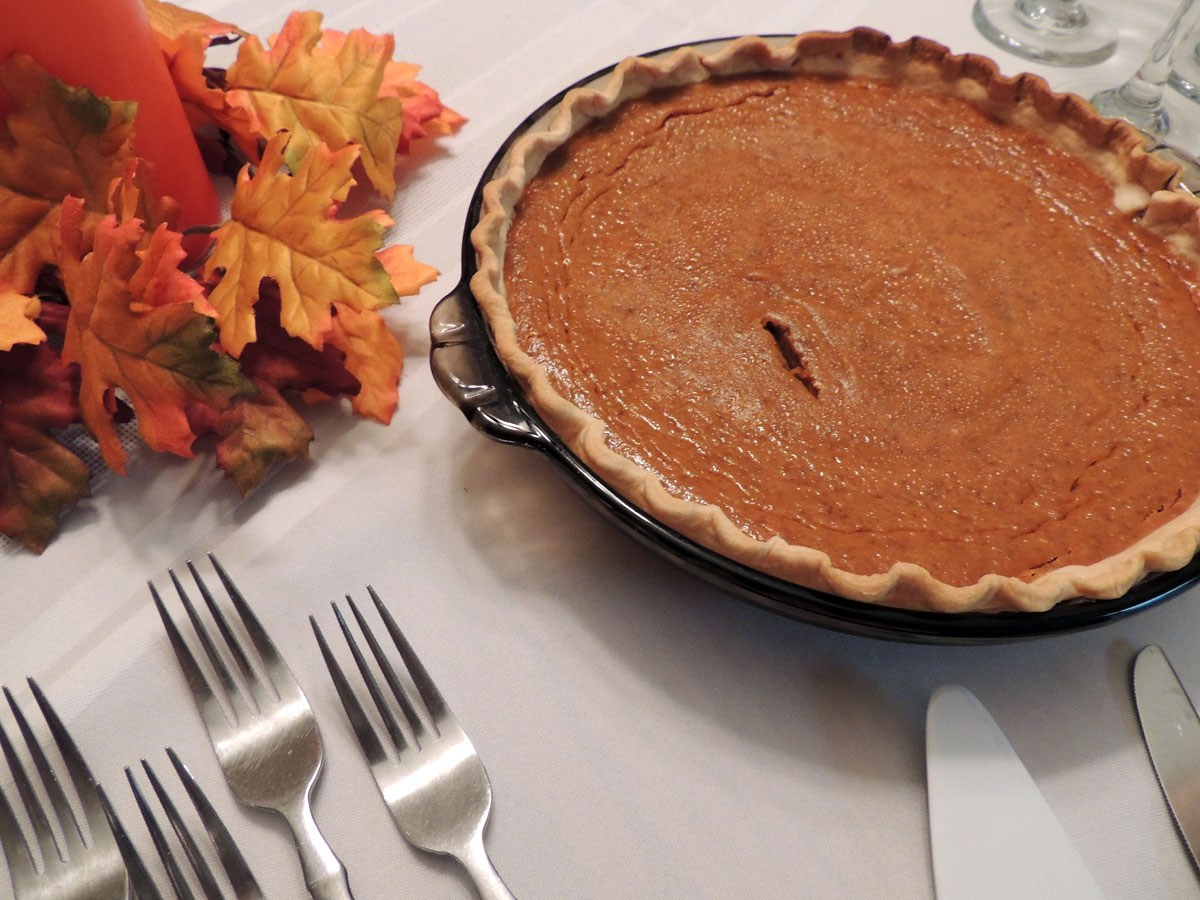 Platina, in De Honesta Voluptate (1475, Venice), gave a recipe for Gourd Pie. You made a purée from the gourds, then added fat, sugar, ginger, cinnamon, eggs, milk and saffron. You put this in a pastry shell, topped it with a top crust, and baked it.

Though the American pilgrims may have been familiar with squashes, because they had already been brought back to Europe and grown there some time, the chances are slim that they served pumpkin pie at their first Thanksgiving: they would have needed wheat flour to make a pie crust, butter from cream from cows, the ground spices, and an oven to bake it all in.

The first pumpkin pie recipes (written from the early 1620s) weren’t a custard-based pie at all: they had you bake slices of pumpkin inside the pie. Some recipes called for the slices to be fried first.

“Now pumpkin pie can be made from a handful of powder. Dry-Pack offers a new pumpkin pie mix, the news of the winter among dehydrated foods, four ounces of powder already spiced and partially sweetened, the price 10 cents, enough for a pie nine inches broad. You add one-third cup of sugar and three-fourths cup of boiling water and blend to a smooth batter, set the mixture aside, and busy yourself with the pastry. That done, turn your attention to the filling again, adding one egg, this slightly beaten, next pour in two cups of milk, bit by bit, beating constantly. When thoroughly mixed pour into pastry-lined pie tin and bake for ten minutes in a hot oven; then reduce heat to moderate, continuing the baking for forty-five minutes. The pie filling bakes smooth and moist. It doesn’t shrink or go watery. It has a spice-brown color; the spice accent on the cinnamon. R. H. Macy & Co. have the new mix at their concentrated foods counter.” — Paddleford, Clementine (1898 – 1967). Food Flashes Column. Gourmet Magazine. December 1945.

This web site generates income from affiliated links and ads at no cost to you to fund continued research · Information on this site is Copyright © 2022· Feel free to cite correctly, but copying whole pages for your website is content theft and will be DCMA'd.
Tagged With: American Food, Pumpkins