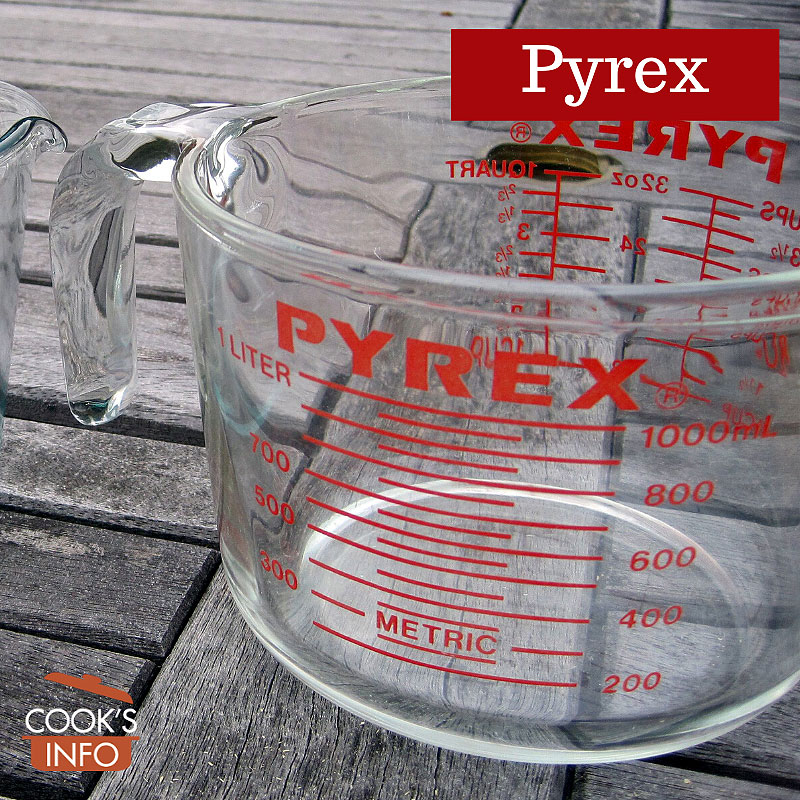 Pyrex® is a trademarked brand name of heat resistant glass stovetop and baking ware. There is also labware such as beakers, test tubes, etc, for laboratory use.

The disadvantage of glass cookware is that it does not conduct heat as well as metal does. The advantages of it are that it looks more “sanitary”, is more resistant to caustic chemicals, and that you can see through it to see what’s happening inside. For this reason, it is used a lot in cooking demonstrations and on cooking shows, so that the viewers can see what is happening inside the cooking or baking vessels.

The Pyrex company also make saucepans, but they can be quite heavy for picking up with one hand when they are full. Amber coloured saucepans were popular for a while in the 1960s and 1970s.

At one point, even irons for ironing clothes were made out of Pyrex. The glass is now also being used for “adult toys.”

Rights to the Pyrex brand name in Europe, the Middle East, and Africa have been licensed since 2006 by a company called Arc International. Arc International still uses borosilicate glass in making its Pyrex as of 2020.

In North America, the Pyrex brand for both home and lab use has been owned by World Kitchen International since 1998 (still current as of 2020), and is made in Charleroi, Pennsylvania.

Consumer reports in North America started to amass suggesting that “new Pyrex” (made from soda-lime glass) might be less durable and less heat-resistant than the “old Pyrex”, but World Kitchen disputed this:

“It has also been wrongly suggested that World Kitchen lowered the quality of PYREX glass bakeware by switching from borosilicate glass to soda lime glass. Again, this is not true. The Charleroi plant has produced PYREX glass products out of a heat-strengthened (tempered) soda lime glass for about 60 years, first by our predecessor Corning Incorporated, and since 1998 by World Kitchen. In fact, since the 1980’s, most, if not all consumer glass bakeware manufactured in the U.S. for consumers has been made of soda lime glass. Consumers should know that soda lime glass, such as that used to make PYREX glass bakeware, is significantly more resistant to breaking on impact than borosilicate glass and comparably resistant to breakage caused by severe temperature changes.” [1] Aikins, Jim. VP World Kitchen. “Setting the Record Straight: The Truth About PYREX®.” Notice to customers posted at http://www.pyrexware.com/thetruthaboutpyrex/index.htm. Retrieved January 2010.

While the soda formulation may be more resistant to simply dropping, it appears that it is less resistant to sudden drastic temperature changes:

“Their investigation confirmed the borosilicate glass would withstand a much larger rapid temperature change. According to their calculation and those of others, soda lime glass cookware shatters more frequently because, in theory, it can only resist fracture stress for temperature differentials less than about 55 °C (99 °F). In contrast, they estimate that the borosilicate glassware could tolerate a temperature differential of about 183 °C (330 °F), a three-fold difference…. From the perspective of kitchen applications, a good calibration point is that of boiling water 100°C (212°F)… None of [our] calculations suggest the soda lime silicate glass would be likely to survive a rapid exposure to boiling water.” [2]DeGuire, Ellen. “New paper addresses causes of shattering glass cookware; margin of safety described as ‘borderline'”. American Ceramic Society. 11 September 2012. Retrieved January 2020 from https://ceramics.org/ceramic-tech-today/new-paper-addresses-causes-of-shattering-glass-cookware-margin-of-safety-described-as-borderline. 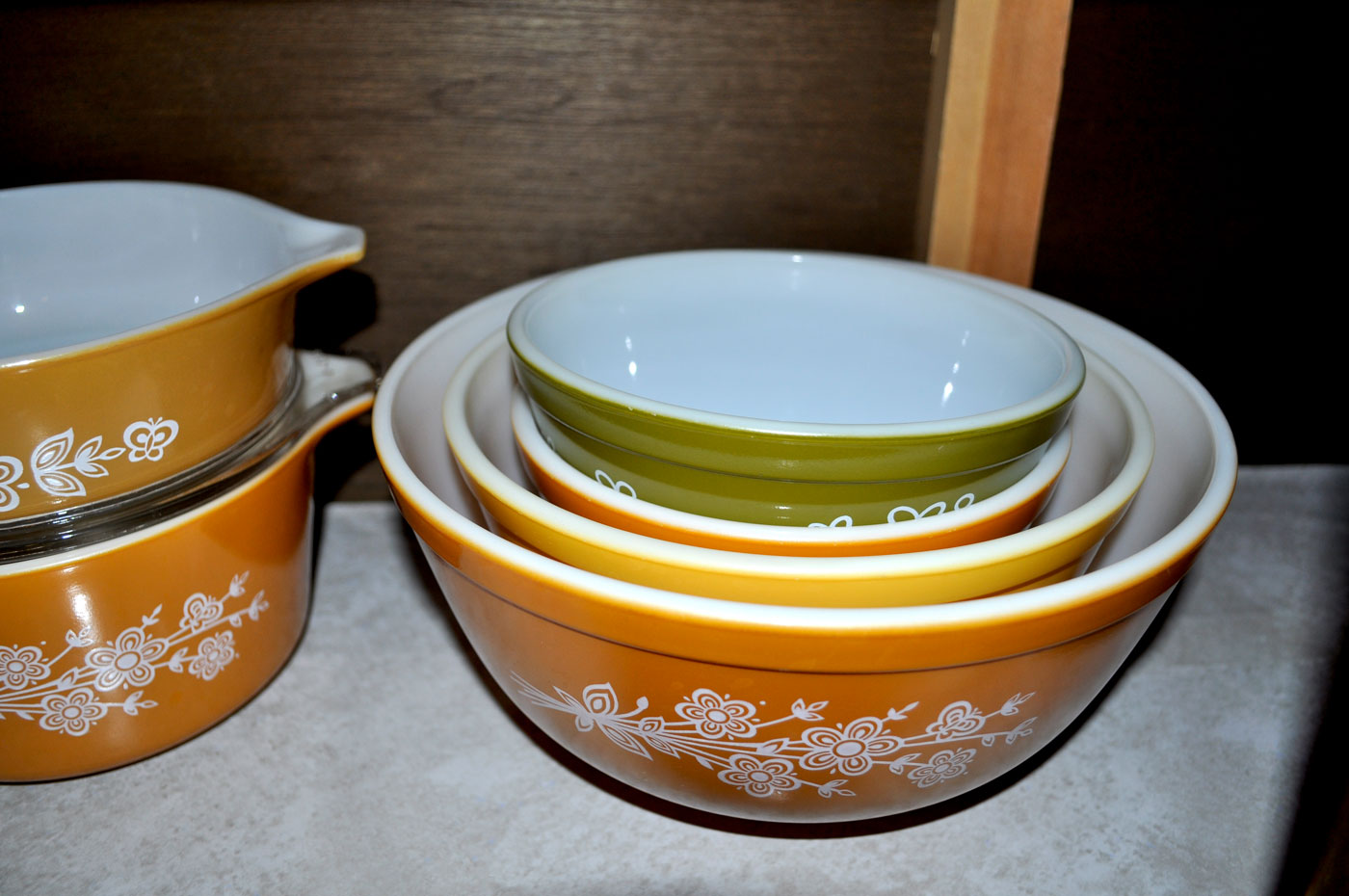 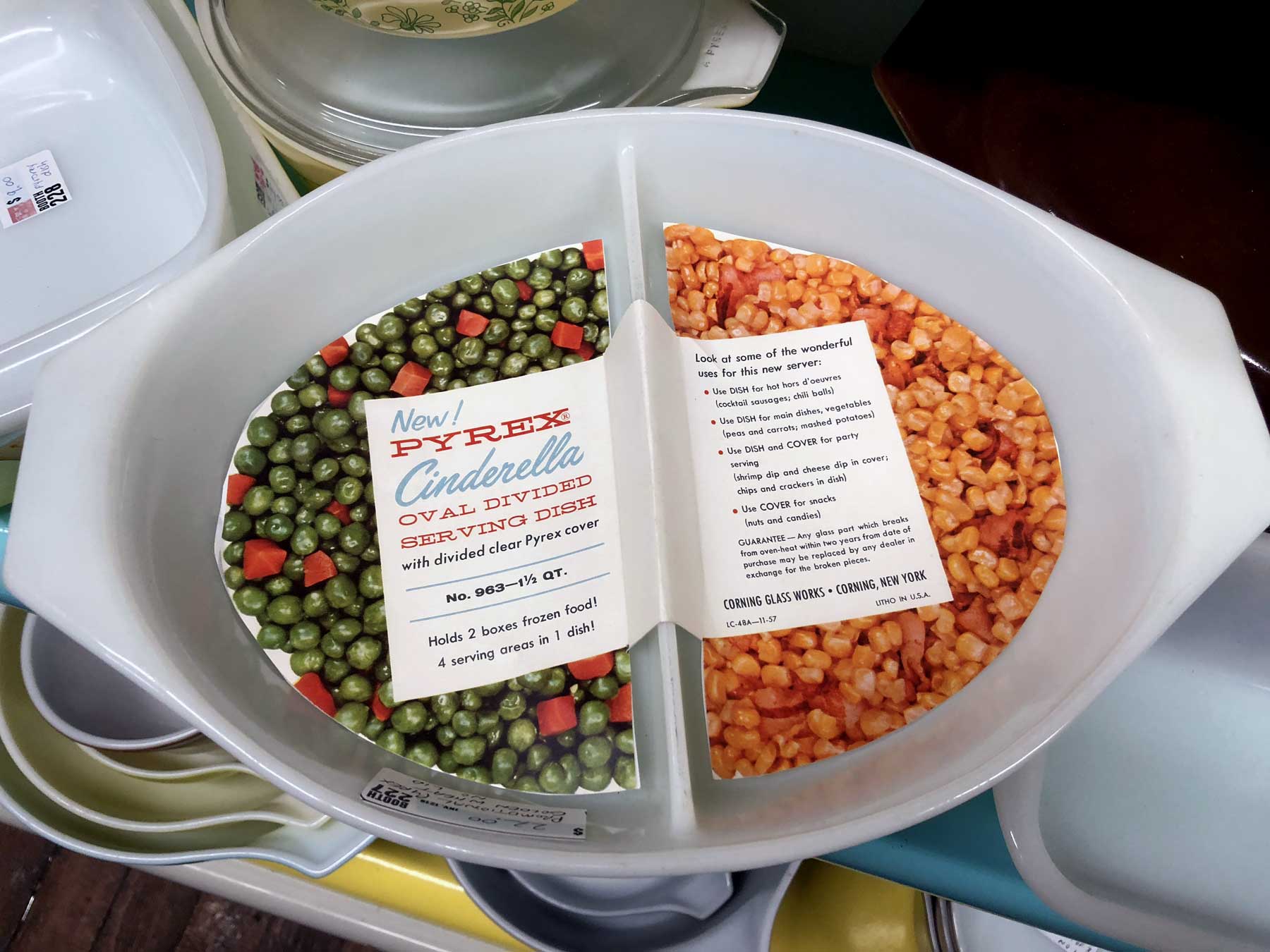 To use stove-top Pyrex vessels on a glass-top stove, an under ring is not needed. But have the burner heat settings at a medium or lower setting, not high, as the glass will actually magnify the heat.

“To use this item on a smooth top stove, simply turn down the heat setting as the glass will actually magnify the heat that is applied on it. Use this item at medium high and lower settings instead of at high heat.” [3]Correspondence from “Melissa”, World Kitchen Customer Care Centre to Carolyn Mason. 22 October 2009.

Do not use Pyrex labelled “bakeware” on the stove top, in a toaster oven, or with the broiler on.

Glass containing boron had been made sporadically since the Middle Ages. However, the two dominant types of glass were lead glass, and soda-lime glass.

Otto Schott (1851 – 1935) is generally credited, however, with the invention of borosilicate glass. His father was a glassmaker in Witten, Westphalia, Germany. Otto studied science in university and wrote a thesis on glass. In 1884, Otto joined Carl Zeiss and Ernst Abbe in founding the “Schott & Associates Glass Technology Laboratory”, which has evolved today into the world-wide Schott company. Sometime between 1887 and 1893, modern refined borosilicate glass emerged from Schott’s research, and his company introduced it commercially in the summer of 1893. The focus at first was on optical products. (Zeiss had specialized in products such as microscopes.) [4]Steiner, J. Otto Schott and the invention of borosilicate glass. Glastechnische Berichte. 1993, vol. 66, no6-7, pp. 165-173.

The Schott company used, and still uses, the brand name of Duran® for its borosilicate glass.

The Corning® company of Corning, New York, began working with borosilicate glass in the late 1800s as well.

Normal glass is “soda lime silica” glass, made from sand, soda, and limestone, with a “thermal expansion coefficient” of 90~100 x 10-7/ C. Borosilicate’s “thermal expansion coefficient” is 32~35 x 10-7/C, only about ⅓ of that of regular glass, which is what makes it stronger. It is also about 15% lighter than glass, and has a small amount of aluminium in it to keep it clear.

But, because borosilicate glass has a higher heat resistance than regular glass, the old glass blowing torches wouldn’t work on it. They weren’t hot enough. New torches had to be designed.

Corning first sold the glass as “Nonex” glass for railway signals and lanterns. Previously, external glass lanterns on trains were cracking because they had a hot flame inside, heating up the glass, which then shattered when moistened with rain or snow. Sales of the new glass lanterns were so good that they put themselves out of business in that market — the glass lasted and so didn’t need replacing. Corning had to find another market for the glass.

In 1911, they began work on adjusting the formula for the glass so that it could be used for kitchenware. By 1915, they had products and an advertising campaign ready. They also prepared to market it as clear heat-resistant glassware in laboratories for lab use as beakers, flasks, measuring jugs, tubes, etc.

In 1915, Pyrex enlisted Sarah Tyson Rorer to promote the product to homemakers.

Pyrex lab and industrial sales did great, while home sales were just okay. The marketing campaign to home-makers positioned Pyrex as efficient and clean, but Art Deco was coming in, and people wanted style. The marketing people did more field work, and found out that for home-makers, the price was too high, and the wares not stylish enough. It also wasn’t flame resistant at this point, just heat resistant. This problem, they passed back to the engineers. They reformulated the glass once more, so that it could be used over open flame and on electric elements, and so that it would be more suitable to high volume automated production lines, which would help them reduce the cost as requested.

In 1936, Pyrex introduced Flameware. It was called Flameware to indicate that it could stand up to being used on top of the stove, over flame. For about 10 years, the glass had a bluish tint to it caused by alumino-sulfate added to the glass formula. The lids, though, were always clear. The formula was changed after the Second World War so that all the glass in the product was clear. [5]Ibid. Flameware was discontinued in 1979. 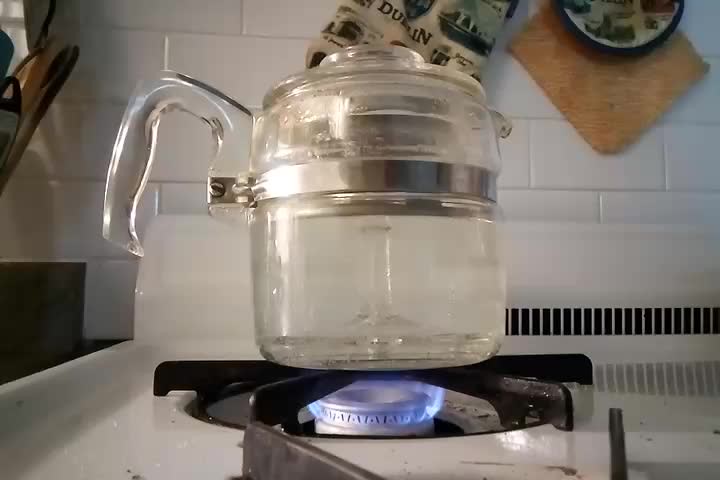 Pyrex in the UK was first made by the Wear Flint Glass Works. The Wear Flint company had been started in 1858 by a Mr Angus and a Mr Greener. They ran into financial problems and in 1885, the firm was assumed by a Mr J.A. Jobling of Newcastle, who had been one of their suppliers. When Corning went to England to shop around British Empire rights for Pyrex, none of the big glass making companies was interested. Working down the list, Corning approached the Wear Flint Glass Works, who bought the rights.

Pyrex was a success in Britain. By 1949, the plant had to expand from ½ an acre to 6 acres to keep up with the demand. In 1952, the company introduced coloured Pyrex in the UK.

Some of the research over the years for Pyrex was done at the Geophysical Laboratory of the Carnegie Institution, Washington, DC. 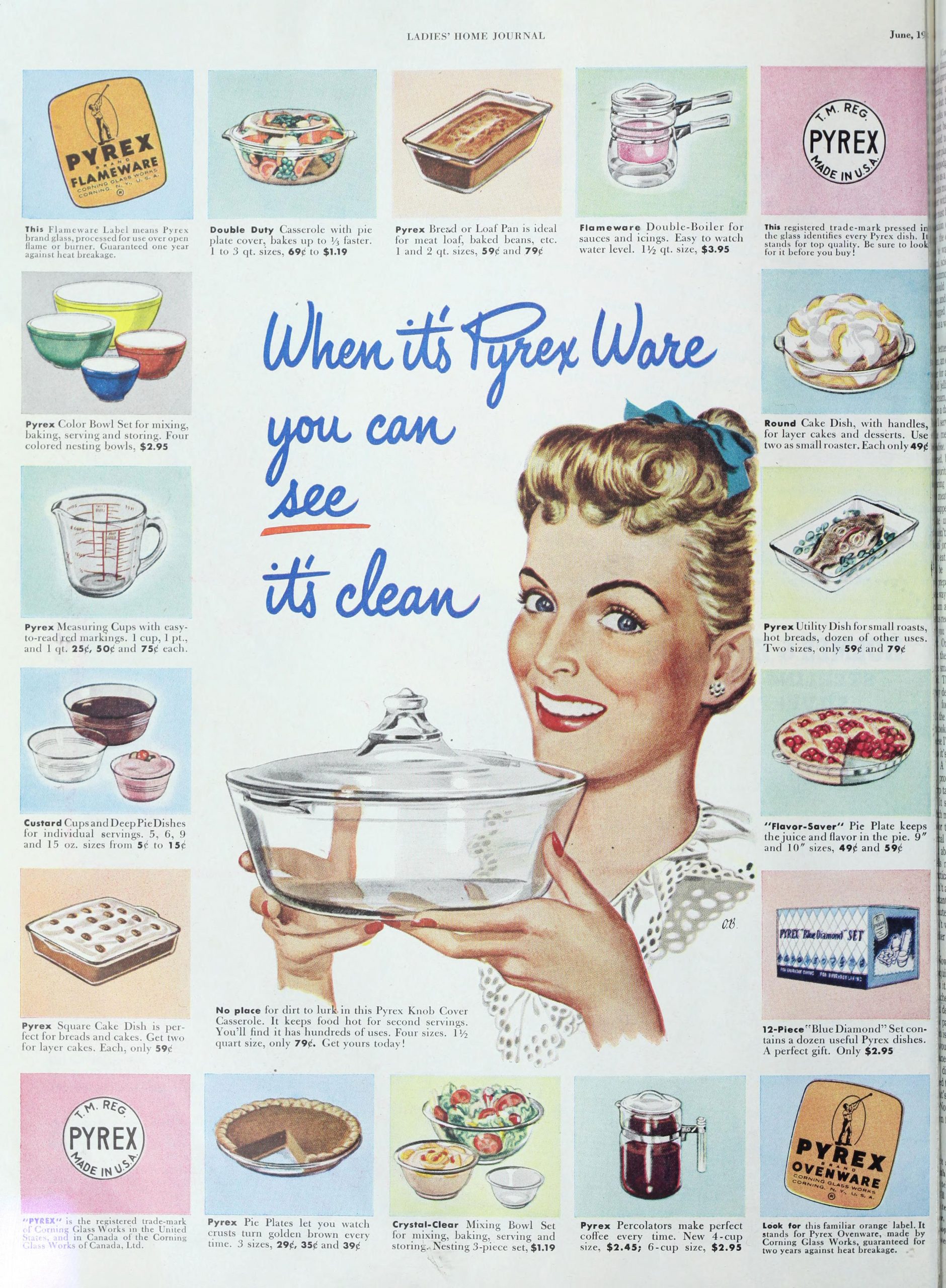 Pyrex ad in : The Ladies’ home journal, June 1948. Click for full size. Accessed January 2020 from The Internet Achive at https://archive.org/details/ladieshomejourna65janwyet/page/n4

This web site generates income from affiliated links and ads at no cost to you to fund continued research · Information on this site is Copyright © 2023· Feel free to cite correctly, but copying whole pages for your website is content theft and will be DCMA'd.
Tagged With: Cookware