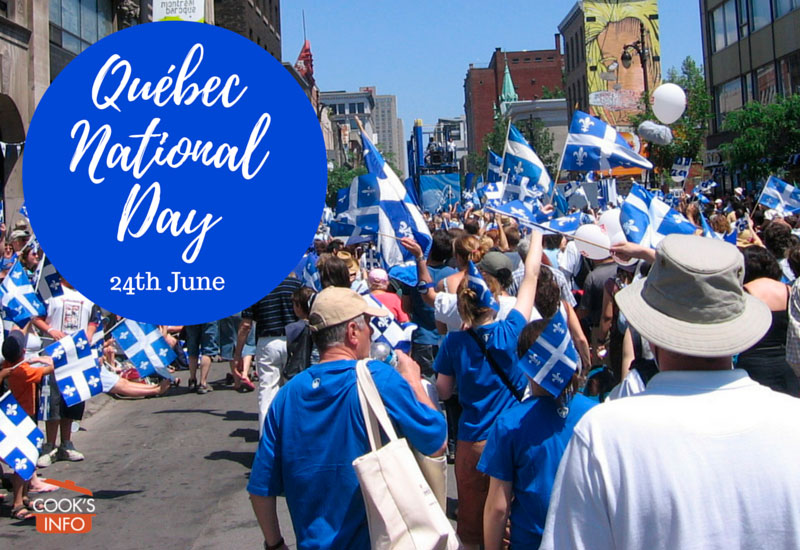 The 24th of June is the national day of Québec, and an official state holiday there, with everyone getting the day off work.

This used to also be Midsummer’s Eve. [1]Midsummer’s Eve now actually occurs on the 21st of June owing to how the “astronomical equinox” has shifted forward several days over the centuries.

The big parade is held in Montréal; smaller ones are held in other centres. On the last float in the parade, there is a blonde, curly-haired child wearing sheepskin (representing St John), carrying a cane and a lamb (this tradition started in 1866.) Other allegorical floats in the parade represent various tales from the nation’s history. In older days, after the parade, people used to go back to their church halls for large meals, then music, dancing and bonfires (“feux de joie”.)

Now, the churches have mostly disappeared from the celebrations, but the outdoor events remain with performances and sports throughout the country accompanied by flag-raising ceremonies. Picnics are held, and streets are closed off for street parties. In the evenings leading up to the day, there will be outdoor performances of song and dance, and fireworks and bonfires in some places.

The bonfires may hearken *way* back to mid-summer pre-Christian traditions. One tradition is that if you jump over a bonfire with the person you’re sweet on, you’ll be married within the year.

Celebrate today with poutine québecoise-style, and tourtière (mind you, the Québecois may well be ordering pizza for themselves while you’re doing that.)

The celebration of St John’s Day in Québec started as early as 1636. By 1694, it was declared a work-free day by the Bishop of Québec, Jean-Baptiste de La Croix de Chevrières de Saint-Vallier. [2]The good Bishop owed the people something, anyway: in 1691, he had forbidden dancing in the colony, and he did everything he could to prevent any theatre as well, even bribing the Governor, Frontenac, to outlaw the performance of plays by Moliere.

The celebrations were interrupted in 1837 after an armed rebellion (“La Guerre des patriotes“) against the political and economic disfranchisement of the French-speaking majority, but restarted again in 1843 and have continued since.

This web site generates income from affiliated links and ads at no cost to you to fund continued research · Information on this site is Copyright © 2022· Feel free to cite correctly, but copying whole pages for your website is content theft and will be DCMA'd.
Tagged With: Québécois Food, Saints