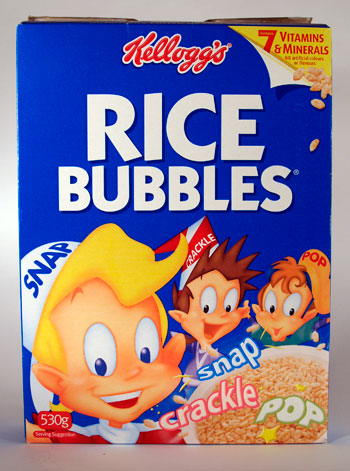 Rice Krispies is a breakfast cereal made by the Kellogg’s company. It is eaten with cow’s milk on it.

It is marketed as “Rice Bubbles” in Australia and New Zealand. Various flavoured versions have been sold over the years.

To manufacture the cereal, rice is milled to remove the bran and germ from it, then it is flavoured with malt, sugar, and salt, and given a boost of vitamins and minerals. It is then cooked by steaming in a rotating oven, then let sit to dry, then passed between rollers to flatten it. After this, it is toasted, which causes it to puff and crisp with tiny air bubbles in it.

When liquid hits the cereal, it causes its internal structure with air bubbles to swell and break, creating the crackling sound.

As of 2008, 29 million boxes a year sold in the UK alone. By 2011, though, sales had fallen 15% compared to 2010, as part of an overall drop in breakfast cereal sales in favour of other things such as yoghurt drinks, etc.

Rice Krispies was created in 1927 by a research and development team led by Eugene McKay at the Kellogg Company’s in Battle Creek, Michigan, USA. William Keith Kellogg approved of the proposed new cereal and said, “you’ve got something there!”

It was released in America on 29 February 1928, and later that year in the UK on 10 November 1928. In the UK, it was first sold door to door by salesmen. By 1936, Kellogg’s had to open a company in England (in Manchester) to meet the demand. British production was briefly stopped during the Second World War owing to a rice shortage.

Rice Krispies were introduced into Australia in 1929.

The phrase Snap, Crackle and Pop was first mentioned in 1932, in radio commercials and on boxes. The Snap Crackle and Pop characters appeared on boxes in 1939, the same year that the Rice Krispies Squares recipe was invented.