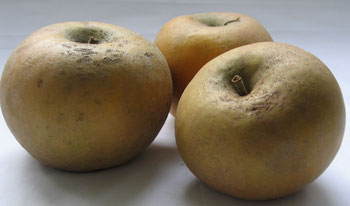 Russet Apples are not a single kind of apple, but rather a group of apples in which there are many, very different cultivars.

Apple enthusiasts feel that Russets are the best tasting apples. However, Russet Apples never make it to the grocery stores anymore. Faced with pictures of perfect, blemish-free apples in food magazines, consumers may have come to believe that russeting on the skin indicates something is wrong with the apple. Others are so used to more insipid apples with a uniform skin texture such as the McIntosh that they don’t like the thought of biting into a patch of skin that feels different.

Consequently, any russeting on apples is seen as a bad sign by producers, because they can’t sell the apples on as fresh-eating apples, which command higher prices.

Apple aficionados, however, continue to hunt Russets out at farmer’s markets. As government researchers bred perfect skin into apples, distinctive flavour got filed in their out-boxes. Russets, neglected and untouched by clinical standards, tend to have still a spicy, pronounced flavour that reminds you why our ancestors wrote poems about apples. To be fair, it’s ourselves we have to blame, because we’re the ones who walked by displays of Russet Apples at the stores until their shelf-space dwindled and disappeared.

Russets need humid storage because the pores that make up the russeting are large and let moisture out. In a dry environment, they will quickly shrivel.

The Victorians, as you can tell from Victorian artwork, preferred the look, and taste, of russet apples.

In the 1500s, Russets were also known as “leather-coats”.

“There’s a dish of leather-coats for you.”
— Davy, in Henry IV, ACT V, Scene III. Shakespeare.