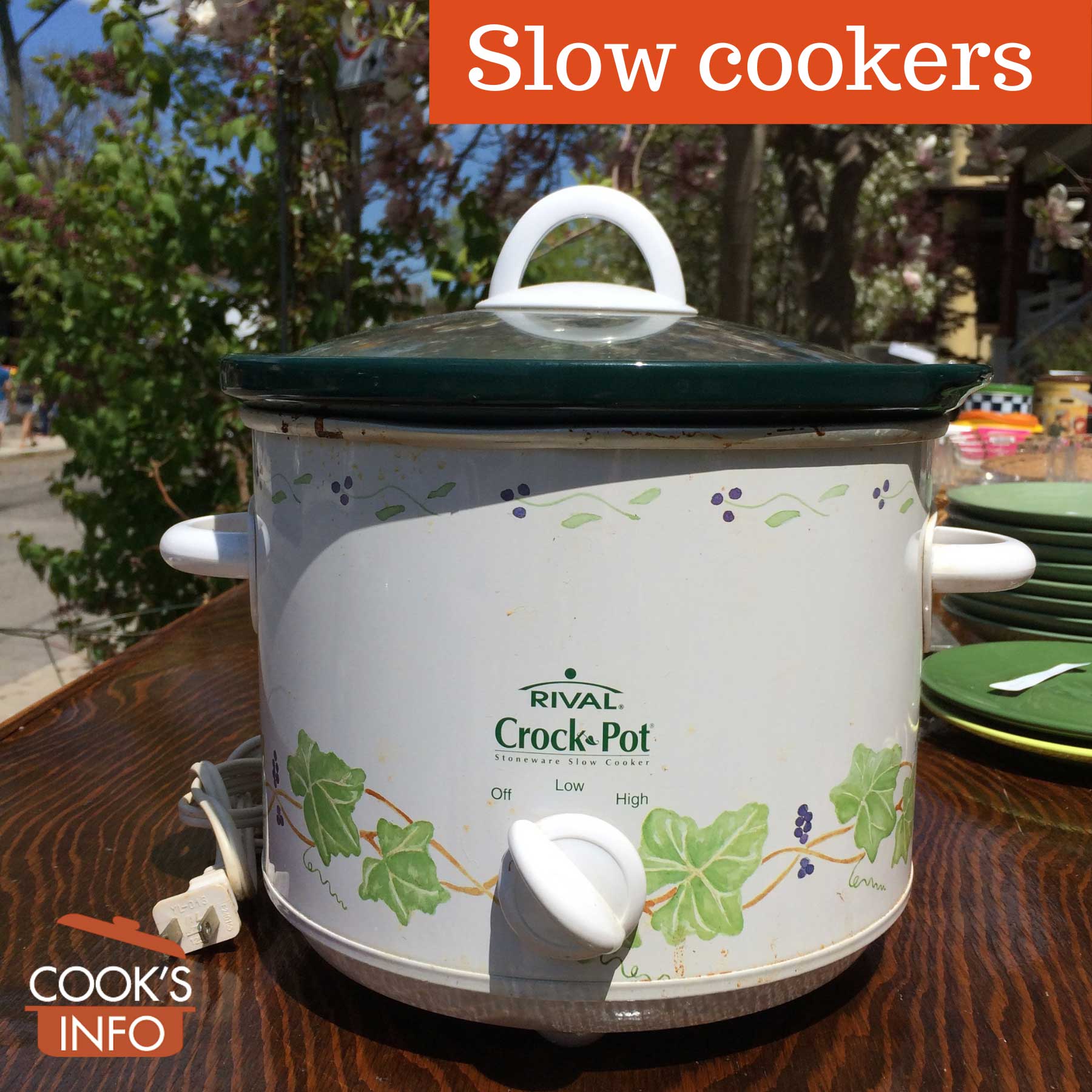 Most models are relatively inexpensive.

There is a tendency to refer to them generically as “crock pots”, but a Crock-Pot® is actually a brand of slow cooker made by the Rival company. The West Bend company calls their line of slow cookers a “Slo-Cooker®.

Some people who have a slow cooker never use them; others use them constantly. Some people use them so much they have two or three of them in various sizes. 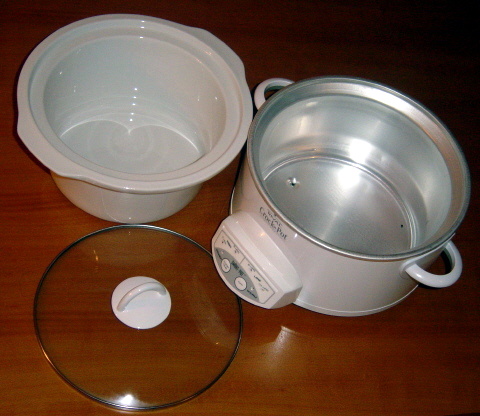 A slow cooker is a covered pot heated by electric elements. It is designed to slowly cook the food put in it over a period of hours at a low temperature in a moist environment.

A slow cooker comes with a ceramic, porcelain or metal cooking pot, aka “the crock”. The crock will typically be round or oval, though square ones are also available. 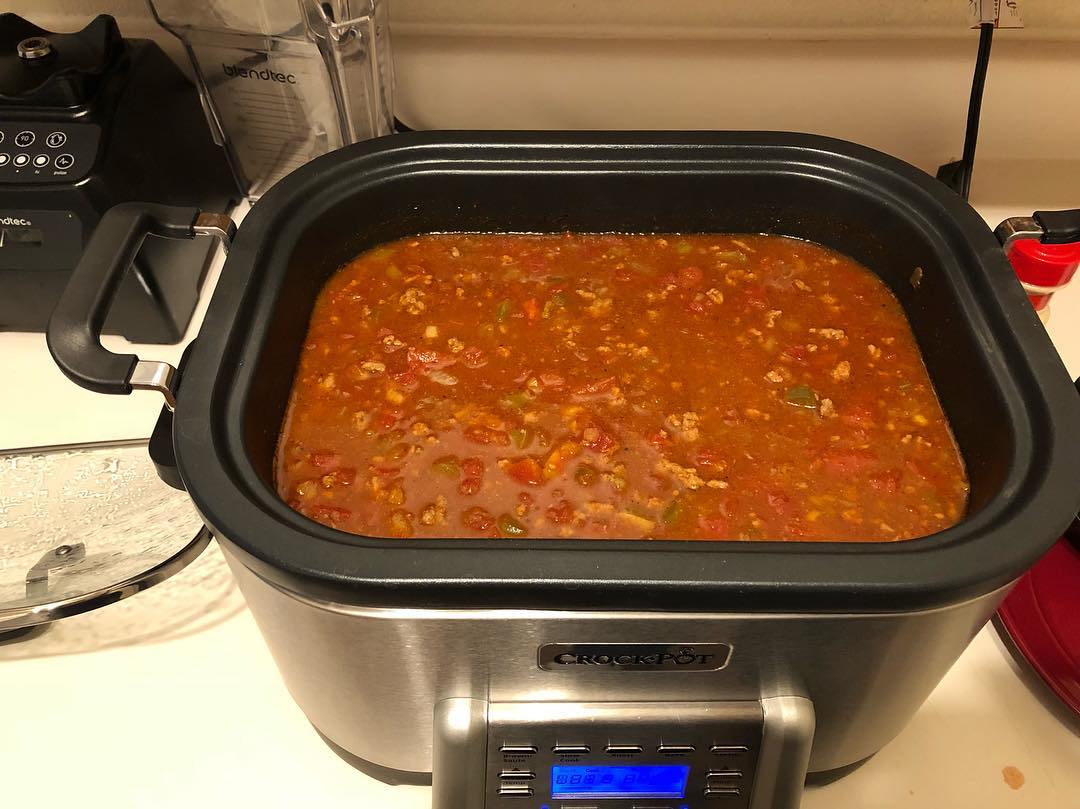 The crock rests inside a metal heating housing. The heating elements are generally at the bottom and / or part-way up the sides of the unit. Most have floral designs on the outside.

The assembly has a lid that covers the pot. The lid is usually see-through glass. Some have hinged lids, but the hinges can be fragile. The lids are designed so that vapour hitting the glass will condense and go back into the food.

Slow cookers are not great for reheating food, as it takes far too long, though a few models now come with oven-safe crocks and crock lids for reheating in an oven.

The temperature of a slow cooker increases the longer it is on. Most dials have three settings: keep warm, low and high. The “keep warm” setting will keep a temperature range of between 62 to 74 C (145 to 165 F.)

The keep warm, low and high settings are an indication of wattage being drawn on, rather than an exact temperature. The reason they can’t give you exact temperatures is because it will vary by model, how much food is in there, room temperature, etc. Food cooked in a crock will reach an internal temperature greater than 74 C (165 F) for food safety reasons. Some models may automatically switch temperatures ranges for you. For instance, some will automatically switch to “keep warm” after a set amount of time. Some are programmable, allowing you to delay the start of cooking, indicating how many hours on low and high, etc.

A slow cooker can be set to “keep warm” and put on buffet tables to use as a serving dish for foods that need to be kept warm for safety and taste reasons. Slow cookers are often carted to community event meals for this reason. Many models come with bands or clamps to help secure the lid on the crock during transport. 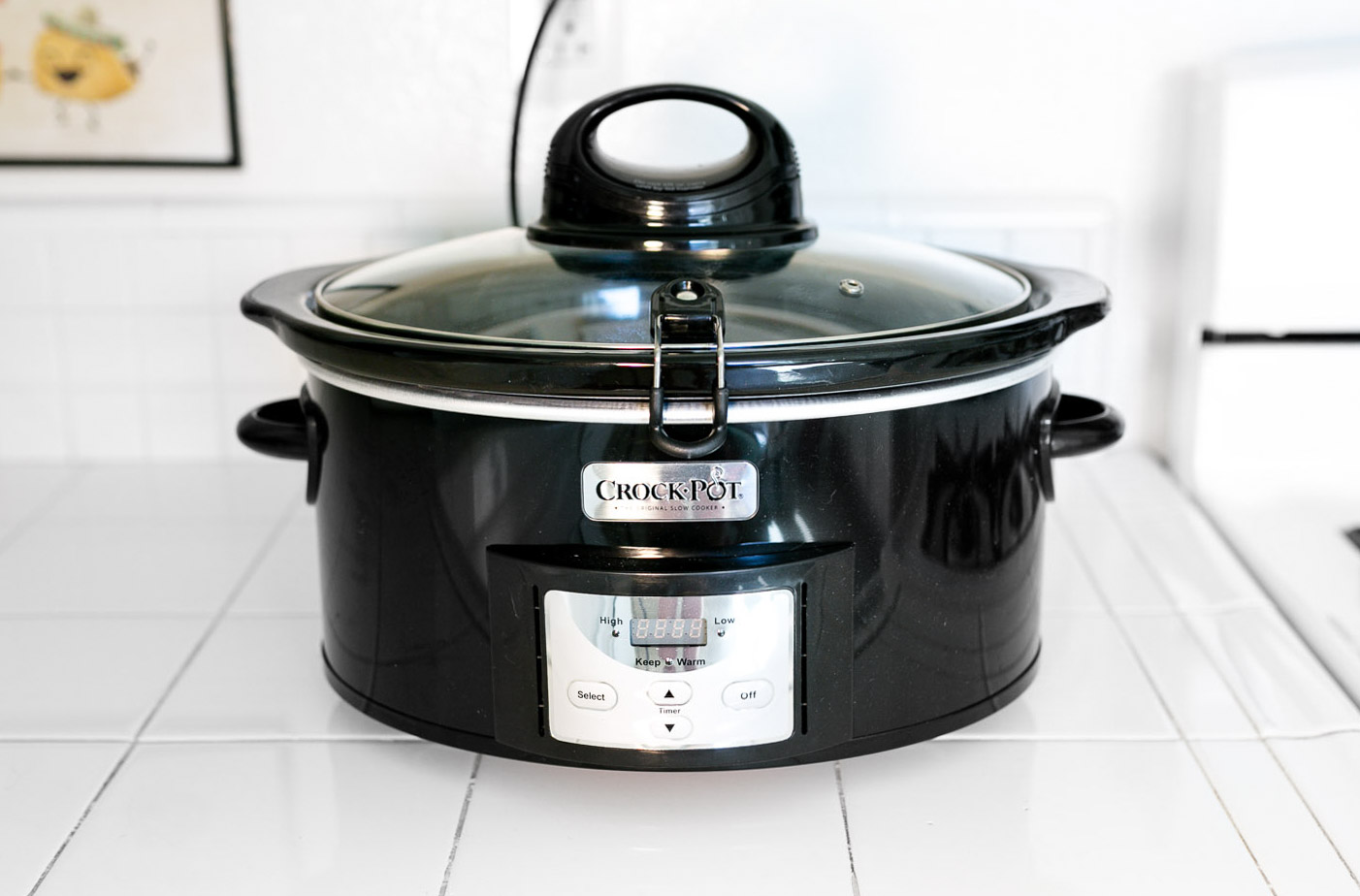 There has been a general belief that slow cookers are energy efficient, but that belief has been challenged.

Slow cookers “run with lower energy wattage (70-250 watts) than a conventional electric oven (2000-3000 watts). However, while slow cookers’ heating elements stay on continuously, electric ovens cycle their elements on and off as needed to maintain temperature, often being on for only about one fourth of the actual cooking time. And, modern ovens are well-insulated to retain heat. Assuming you would use a slow cooker on high for twice as many hours as your electric oven, the energy usage would probably come out about the same.” [1]Gray, Sherry. University of Connecticut Extension Service. Are Crock Pots Economical? Accessed January 2016 at http://sustainableliving.uconn.edu/articles/crockpots.php

Other factors with oven use include being able to fit many things in at once.

Much of a slow cooker’s heat is lost out through the sides, which also makes them dangerous to touch during operation.

There are now insulated slow cookers on the market. In addition to reducing their energy consumption, the insulation also make the sides safe to touch during operation. And, insulated slow cookers can be good for cooking in the summer months, as the heat in them is contained: consequently, they don’t help nudge the kitchen into a warm range which you then have to run the air conditioner to cool back down.

Slow cookers are good for cheap cuts of meat; they essentially braise or stew them.

Some say slow cookers will only produce pedestrian and mediocre meals. They say the root of the cause is that most slow cooker recipes are geared to people who can’t cook to start with — many of the recipes call for cans of soup, and there is no searing of meat, no sautéing of vegetables first, nothing that would develop flavour in a normal recipe.

The food prep for slow cooker cooking is really important for good quality cooking results, rather than just throwing everything in raw. Beef and pork pieces are often best browned before putting in. Some new models will let you brown meat in them. Any meat should be thoroughly thawed first before going in.

When converting regular recipes for slow cooker use, bear in mind you may need to reduce the liquid, as most liquid gets retained.

When doubling recipes, keep in mind that flavours intensify in a slow cooker. So instead of doubling spices, just increase them by 1 1/2 times. You may not need to completely double the liquid, try 1 1/2 times first, you can always add more later.

Dried beans must be boiled separately in water until soft before adding to recipes. Red kidney beans particularly, for health safety reasons, must be properly boiled separately. They have a toxin in them that a slow cooker won’t get hot enough to destroy.

Pasta is best cooked on its own in water, normally, then added in.

Long grain converted rice is the best rice to use in a slow cooker.

Don’t preheat the slow cooker with nothing in it.

If the electrical power goes out during a cooking session, try to finish cooking on the stove if you have a gas stove.

You can do steamed puddings in a slow cooker (basically you just use it as the steamer.)

To roast a chicken in a slow cooker, put the chicken in on high for about 2 1/2 hours. The secret to getting it to “roast”, and come out brown as opposed to sickly white, is to use a turkey baster to periodically suck out the juices that accumulate. This helps to give the somewhere “drier heat” needed for roasting. Put the juices you suck out in a measuring jug, and use for gravy afterward, or, freeze for soup stock.

Some older crockpots from the 1970s may contain asbestos in the lining of their metal housings.

If you really want to know if your food is getting hot enough for safety: fill the crock two-thirds full with lukewarm water, set on low. After two hours, check that water temperature has reached at least 70 C (158 F.) [2]New Zealand Food Safety Authority. Cooking safely with slow cookers and crock pots. Retrieved August 2010 from http://www.nzfsa.govt.nz/consumers/food-safety-topics/food-processing-labelling/slow-cookers/index.htm

When you turn a slow cooker off, serve the food promptly and refrigerate any leftovers. Don’t leave the food in a powered-off slow cooker for any length of time or food poisoning may result:

“Last week, I received a call… According to my caller, a woman had prepared a main dish in a slow cooker. When it was done, she turned it off, covered it and let it stand on the counter for many hours. Later, she ate some of the food. Investigators determined that botulism was the cause of death… I don’t know all the details. Maybe she made this dish many times previously. Perhaps she let it stand on the counter in the past but was fortunate that the toxin didn’t form the other times… If you make food ahead of time or have leftovers, be sure to cool foods quickly. Toxins can form in food that is not cooled fast enough.” [3]Garden-Robinson, Julie. Botulism Not Only Linked to Home-canned Foods. North Dakota State University Extension Service. 14 June 2014. Accessed January 2020 at https://www.ag.ndsu.edu/news/columns/prairie-fare/prairie-fare-botulism-not-only-linked-to-home-canned-foods

The first slow cooker was introduced in 1971 by Rival as the Crock-Pot®. Crock Pot is still a trademarked name.

Rival based the Crock-Pot® on the “Naxon Beanery All-Purpose Cooker”, which Rival Industries acquired in 1970 when they bought the Naxon Utilities Corporation of Chicago.

Rival’s Crock-Pot® revolutionized cooking in the 1970s, allowing women more time away from the stove, and kitchen. They used the slogan, “Cooks all day while the cook’s away.”

Removable crocks were introduced in 1974.

After a time, slow cookers acquired a reputation for being naff, but in the recession that started in 2009, sales soared again.

Consumer Reports. Slow cookers can save you time and money. Video. 18 February 2009. Retrieved August 2010 from http://blogs.consumerreports.org/home/2009/02/slow-cookers-crock-pot-rival-all-clad-hamilton-beach.html

This web site generates income from affiliated links and ads at no cost to you to fund continued research · Information on this site is Copyright © 2022· Feel free to cite correctly, but copying whole pages for your website is content theft and will be DCMA'd.
Tagged With: Pots