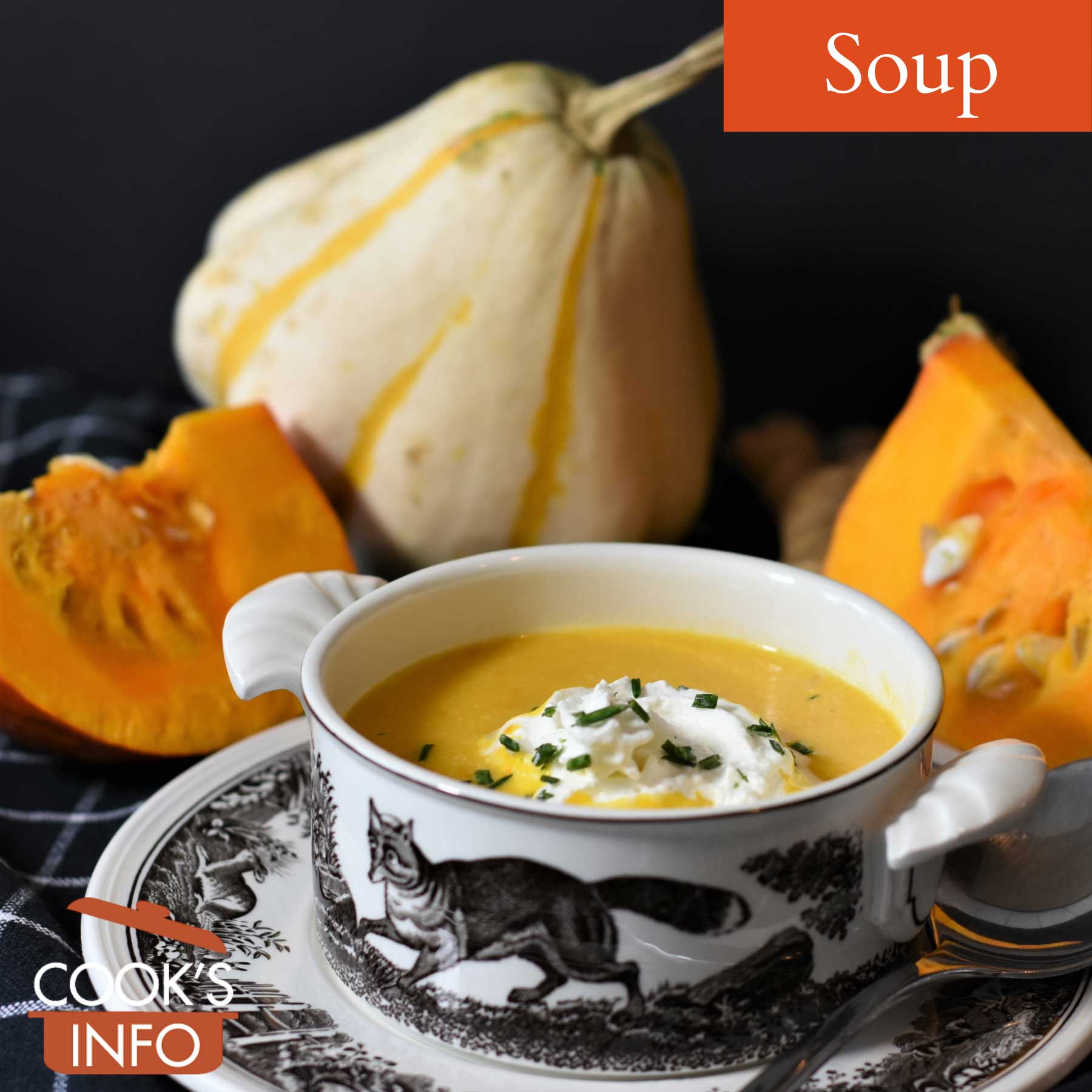 A soup is a liquid dish, generally savoury and generally served hot. A soup can be the start of a meal, or a meal in itself.

Soups can be hearty and bracing, with dumplings, rice or pasta, or they can be as light as consommés or broths, nutritious when recovering from illness and useful for introducing a many course dinner. Soups can also be cold and refreshing, such as the soup called “Vichyssoise”; they can even be sweet.

Soups are a very forgiving dish to make, in that you can adjust them as you go along, and recover from almost any error. For this reason, they’re also a good dish for beginning cooks to try to master.

Soups are useful as the main course in a casual supper; they are also a good starter for a meal because you can make them ahead.

Correct the taste of soup at the end by checking for four areas of taste: sweet, sour, salty and bitter. See the entry on: Adjusting the Taste of Dishes.

The other key element of a successful soup is the mouth feel of it. This can be achieved by adjusting the texture of it.

To give a cream or smooth soup more texture, purée only 3/4 of it.

If you have a few spoonfuls of mashed potato in the fridge and are making a soup, especially one that has to be puréed in the blender anyway, consider stirring the leftover mashed into the soup before you purée it. It is a wonderful thickener that can cut down on the amount of flour or cream you have to add to the soup. If this sounds odd, remember that mashed potato often contains milk and butter, which you would put into a creamed soup, anyway. If the potato part sounds weird, consider that puréed potato is used to make “Vichyssoise” or Cream of Potato soup. You can also use instant mashed potato flake.

“A woman who cannot make soup should not be allowed to marry” — Philip Morton Shand: A Book of Food. 1927.

“Soup is cuisine’s kindest course. It breathes reassurance; it steams consolation; after a weary day it promotes sociability, as the five o’clock cup of tea or the cocktail hour. Every nation, every forgotten corner of the world has its special soup recipe. Soup has been celebrated in verse and story almost as reverently as the first signs of spring. For there is nothing like a plate or a bowl of hot soup, its wisp of aromatic steam making the nostrils quiver with anticipation, to dispel the depressing effects of a grueling day at the office or the shop, rain or snow in the streets, or bad news in the papers. Soup is to the meal what the hostess’s smile of welcome is to the party, a prelude to the goodness to come.” — Louis Pullig De Gouy (1869 – 1947). The Soup Book: 770 Recipes. New York: Greenberg Publications. 1949. The Soup Book. Page x.

The American sitcom Seinfeld introduced the character of the “Soup Nazi”, who appeared in a 1995 episode and briefly in the serie’s very final episode.

The character was based on Al Yeganeh, who owned the Soup Kitchen International (closed summers and weekends) at 259A West 55th Street in New York. Yeganeh’s rules in his shop were that you waited to line up along the counter, knew what you wanted and had your money ready, and moved to the left of the cash register once your order had been placed. Failure to follow his rules could result in his refusing to serve you. His soups were reknowned, however, and it was owing to him, and his portrayal on Seinfeld, that many Americans today know about Mulligatawny soup.

In the Seinfeld episode, the character’s name was changed to “Yev Kasem.” Though not necessarily liking the “Soup Nazi” label that stuck to him because of the Seinfeld episode, Yeganeh none the less announced plans in April 2005 to build upon the reknown that had come his way and he started a franchise of soup shops across America which he owned until the company’s bankruptcy in 2017.

A rival soup shop called “The Soup Nutsy” appeared in New York 10 blocks away from his original store.

Elaine: Do you need anything?
Kramer: Oh, a hot bowl of Mulligatawny would hit the spot.
Elaine: Mulligatawny?
Kramer: Yeah, it’s an Indian soup. Simmered to perfection by one of the great soup artisans in the modern era.
Elaine: Oh. Who, the Soup Nazi?
Kramer: He’s not a Nazi. He just happens to be a little eccentric. You know, most geniuses are.