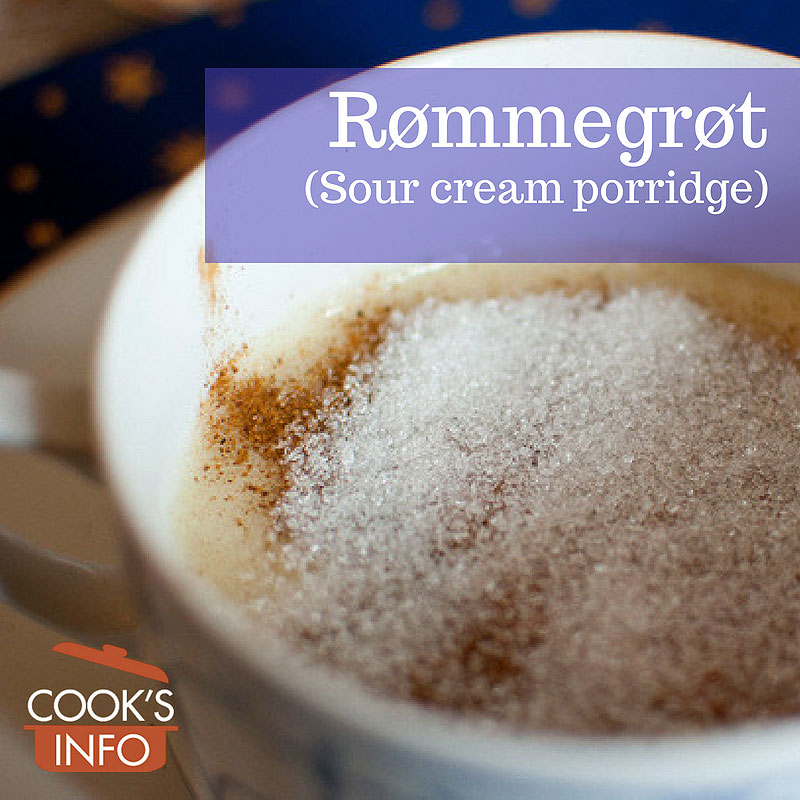 Sour cream porridge (“rømmegrøt”) is a Norwegian dish served at holidays, often along with cured meats.

It is made with milk, sour cream and flour, instead of water and oats as porridge is in the English-speaking world.

It is hearty and very heavy going.

Very high-fat (about 35 %) sour cream must be used, or it won’t survive the cooking. It is recommended that it contain no added stabilizers or gelatin. [1]”Sour cream porridge must be made from high fat (35%) natural sour cream, with no stabilizers or gelatin added.” Sons of Norway website. Accessed August 2018 at https://www.sofn.com/norwegian_culture/featured_recipes/rommegrot/

You can buy ready-mix packets for rømmegrøt now, which many feel tastes very close to the homemade. The packets will make 3 to 4 portions, in 7 minutes.

Rømmegrøt, with cured meats off to the right. Tomas Eklund / wikimedia / 2007 / Public Domain

The following recipe is from the Sons of Norway.  [3]Sons of Norway website. Ibid. They do not give the yield.

Simmer the sour cream for a few minutes. Meanwhile, heat the milk and set that milk aside.

Sift a third of the flour over the sour cream, stir in, then simmer some more until the cream begins to break down and release fat. You skim this fat off, then add the remaining flour along with some milk, raise temperature to a boil, then lower to a simmer again, whisk smooth, thin out with some additional milk as desired. [Ed: you do not have to use all the milk.] Dish out into bowls; serve with butter, sugar and cinnamon on top. Serve with cured meats.

The above video shows rømmegrøt being served.

This web site generates income from affiliated links and ads at no cost to you to fund continued research · Information on this site is Copyright © 2023· Feel free to cite correctly, but copying whole pages for your website is content theft and will be DCMA'd.
Tagged With: Norwegian Food