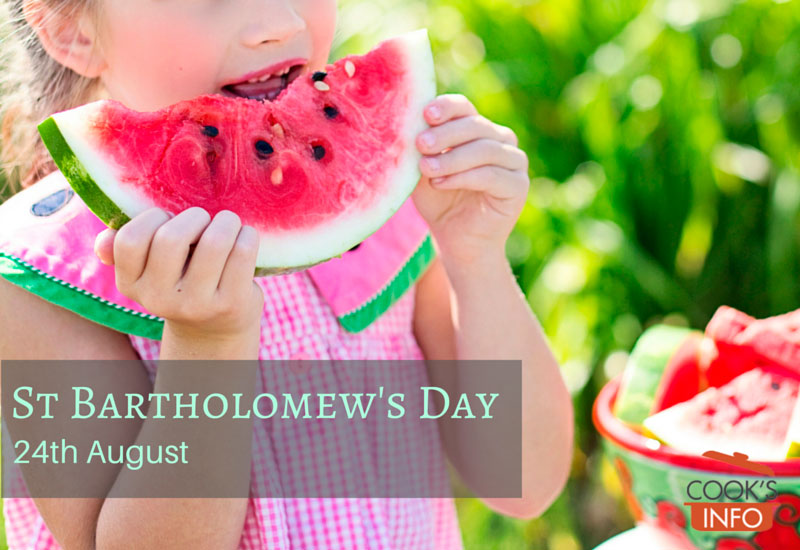 The 24th of August is Saint Bartholomew’s Day.

It is traditionally celebrated by eating watermelon, of which St Bartholomew is the unofficial, and accidental, patron saint.

On the island in the middle of the Tiber river running through Rome, there is a basilica church dedicated to St Bartholomew — San Bartolomeo all’Isola, built on the site of the Roman Temple of Aesculapius. 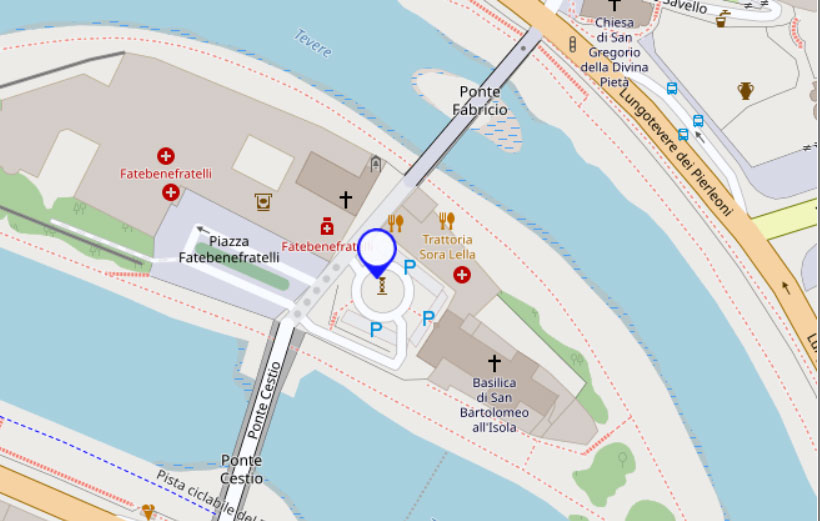 Location of St Bartholomew’s basilica, with round piazza in front of it, Tiber Island. Google maps.

Here for centuries in the piazza in front of his church on the island a watermelon festival was held on St Bartholomew’s feast day, because his feast day happens to occur right at the height of watermelon season in Rome. 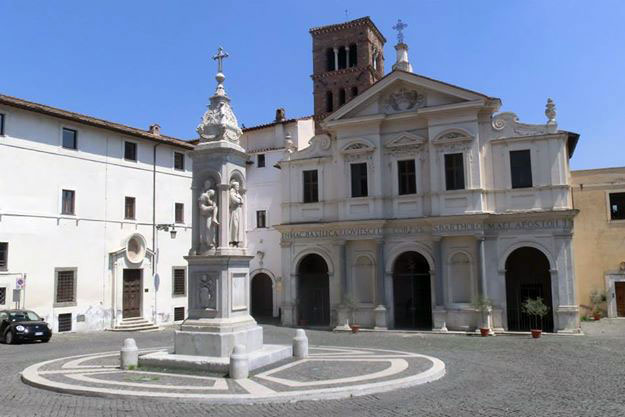 Here, a watermelon festival and market was held, with vendors displaying watermelon pieces for sale on ladder steps acting as shelves, with the ladders gaily decorated with leaves and ribbons. 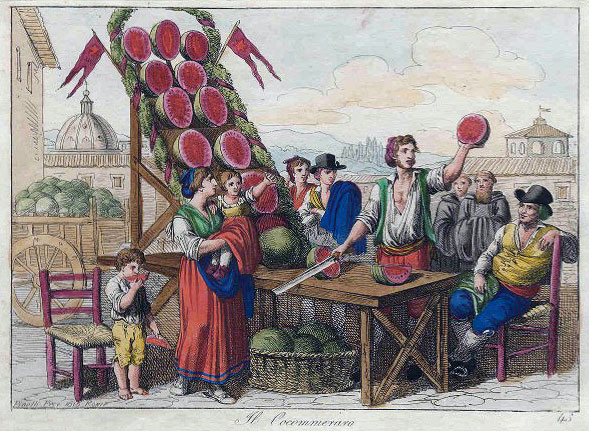 From time to time, a vendor would throw a watermelon into the nearby Tiber river as a prize for the boy who could retrieve it from the river, but that practice was eventually banned after too many deaths.

“The festival had as its theatre the Tiber Island, the lowest point of the city and the one that was most in contact with the river. The celebration of the watermelon festival took place on this square. Ladders were erected, and on them were displayed cut watermelons… the watermelons were [also] piled up like cannonballs at Castel San Angelo. If one rolled, the kids ran to chase it and enjoy it. Buyers beat with their knuckles to see if the fruit was ripe; some wanted a small cobbler’s knife to sample the taste… On this day, until it was forbidden, there was the tradition of throwing some fruits into the Tiber, followed immediately after by half-naked boys who dove to recover the sweet fruit; this was dangerous both because of the nearby mills, located on the river, which often trapped a boy in their wheels, and because, being August, the water was low and some banged their heads with tragic consequences. The watermelon vendors used to invite customers to buy saying, “Taja ch’è rosso! E’ zucchero donne!” [Ed: Tagliatelo donne il cocomero, che è rosso (cioè maturo, pronto)! è dolce come lo zucchero (il cocomero maturo)! Women, cut the watermelon, how red it is! and sweet like sugar!] Finally I remember that in Rome the watermelon has always been considered a complete fruit because …: “Ce magni, ce bevi e te ce lavi er grugno” (“Ci mangi, ci bevi e ti ci lavi la faccia”) —You eat it, you drink it, and it washes your face.” [1]Barnaba, Nicoletta Fattorosi. Taja ch’è rosso! 3 September 2018. Accessed July 2021 at https://www.lalampadina.net/magazine/2018/09/roma-taja-che-rosso/ 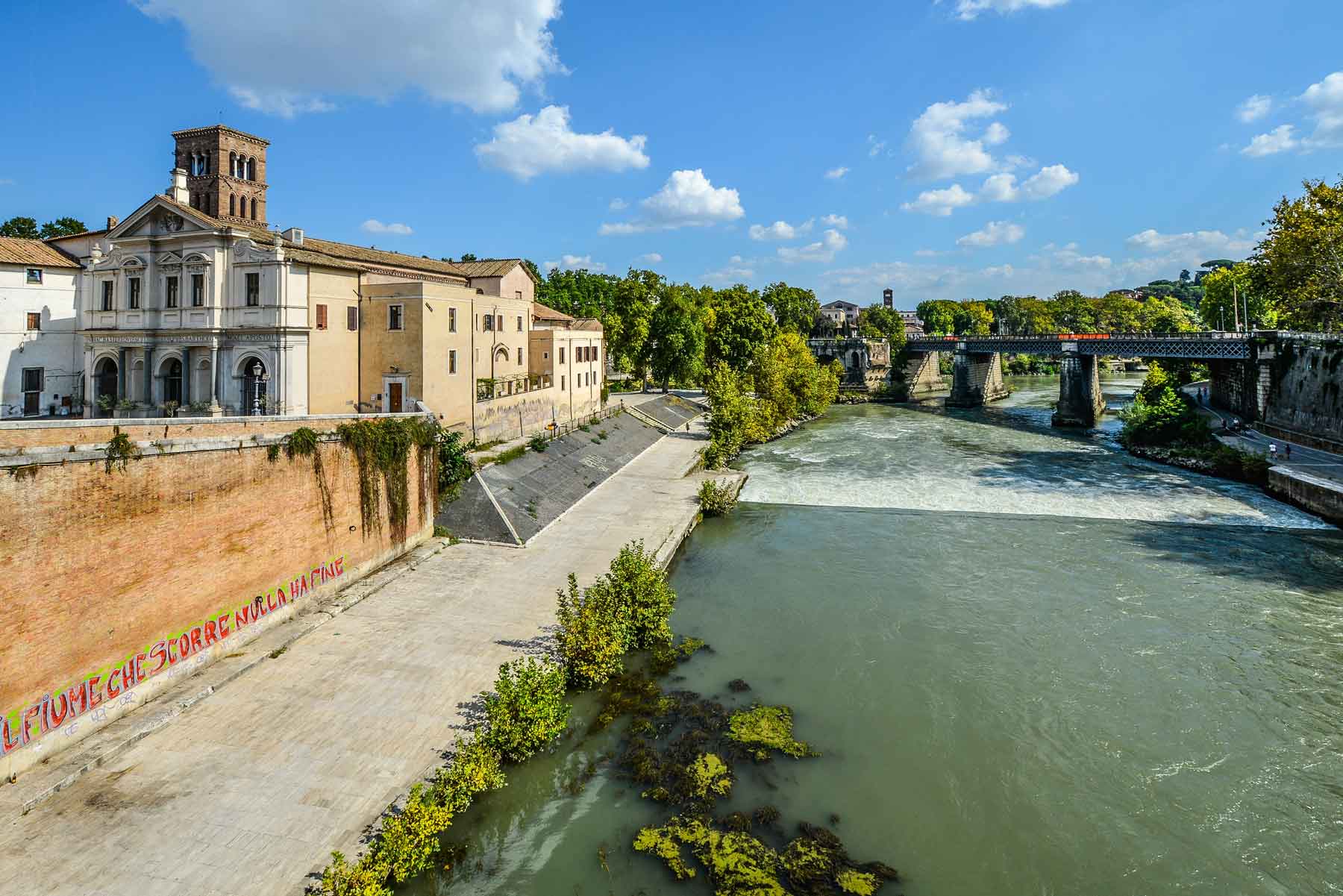 Tiber Island, showing St Bartholomew church on island, and one branch of the Tiber river going around the island. user32212/ Pixabay.com / 2016 / CC0 1.0

From Rome, St Bartholomew’s happenstance association with watermelon was carried out to many other places around the world, such as Spain. On the Spanish island of Majorca, children make lanterns out of watermelons and parade with them on St Bartholomew’s day:

“The interpretation of the relationship between Bartholomew and melons would appear to be subject to a degree of flexibility. In Alcudia [Majorca, Spain]… the story goes that this tradition had to do with the last of the summer’s melons. The children of the one-time farming community would eat the final sweet fruit, but the melon’s passing was something to celebrate as well. Hence they made lanterns, and the lanterns’ festival became a rather peculiarly pre-emptive lament for the passing of summer as well. The children would carry their melon lanterns through the streets and sing songs as they did so.” [2]Ede, Andrew. Saints, plagues and the last of the summer melon. Majorca, Spain: Majorca Daily. 25 August 2020. Accessed July 2021 at https://www.majorcadailybulletin.com/life-style/life-style/2020/08/25/71465/saints-plagues-and-the-last-the-summer-melon.html

The watermelon festival at St Bartholomew’s in Rome reputedly ended in 1870, though for reasons not clearly explained: “In the past, on the occasion of the feast of St. Bartholomew, on August 24 the watermelon sellers used to throw some fruits into the water that the children of the people tried to collect by diving into the Tiber. This characteristic tradition of the Ripa district, linked to its most important holiday, ended in 1870 when Rome became the capital of the Italian kingdom.” [3]”In passato in occasione della festa di san bartolomeo, il 24 agosto i venditori di cocomero erano soliti lanciare in acqua alcuni frutti che i ragazzi del popolo tuffandosi nel Tevere tentavano di raccogliere. Tale caratteristica tradizione del rione Ripa, legata alla sua festività più importante, si concluse nel 1870 quando Roma divenne capitale del regno italiano.” — San Bartolomeo all`Isola. Accessed July 2021 at https://guidasantuari.altervista.org/blog/san-bartolomeo-allisola/

Though the festival at St Barthomew’s church is no longer held, watermelon is for sale everywhere in Rome at this time of year still:

“The tall ladder towers adorned with leaves and colored ribbons as in Bartolomeo Pinelli’s engravings have disappeared for decades. The feast of the watermelons, on August 24, on the Tiber Island for San Bartolomeo practically forgotten. And today the much less compromising cubes of pulp in plastic cups are preferred to the huge and juicy slices to bite with lust regardless of bon ton.” [4]Distefano, Natalia. Cocomerari, gli ultimi sopravvissuti del vizio estivo nella Capitale. Rome, Italy: Corriere della sera. 15 August 2015. Accessed July 2021 at https://roma.corriere.it/notizie/cultura_e_spettacoli/15_agosto_14/cocomerari-ultimi-sopravvissuti-vizio-estivo-capitale-61bdba82-429d-11e5-ab47-312038e9e7e2.shtml

Saint Bartholomew is also the patron saint of the alcoholic beverage called “mead.”

Caggia, Sergio and Paul Gwynne. Saint Bartholomew and the Watermelon. Accessed May 2016 at http://www.nerone.cc/nerone/archivio/arch39.htm