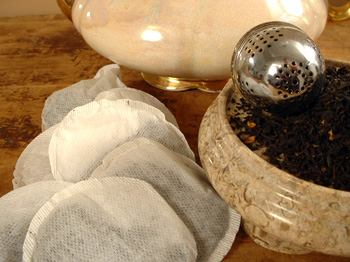 Tea means several things: the tea shrub, the leaves of the shrub, and the drink made from the leaves. Tea is grown in tropical and subtropical areas; connoisseurs say the best tea is grown at high altitudes.

Irish Breakfast
Strong taste, often blended from a base of Assam Tea.

Caravan Tea
Often a combination of Indian and Chinese Black Teas. The blend arose in Russia from imports brought in from Asia by camel caravans. By 1900, the Trans-Siberian railroad supplanted the caravans.

Earl Grey
Black tea blended with Bergamot oil. Earl Grey (1764 – 1845) was a Prime Minister of England; the story has it that he was presented the tea by a Chinese trade official. This is almost certainly a myth.

Darjeeling
Grown in the mountain area of India known by the same name. Light flavour.

Keemun
Black, mellow tea (don’t serve with lemon as combined tastes will be too tart.)

Though foodies long sniffed at grannies and aunties who liked a cup of tea with their meals instead of wine, by 2005 foodies in hip urban cities were in fact starting to experiment matching teas with foods. The Chinese have long served tea with meals.

There are zillions of books and opinions on how to brew Tea.

Tea needs to be made with water that has boiled at 100 C (212 F.) Inside a pressure-reduced aircraft cabin (about 75 per cent of normal atmospheric pressure), water boils instead at 90 C (194 F.) This causes tea made on airplanes to taste odd: because the water hasn’t actually been properly boiled. The same effect is experience in high altitude cities, such as Mexico City, and up in mountains.

Beginning in the 1840s, when the price of tea started to come down, some British cooks began to experiment with adding black tea to recipes, particularly sweet dishes. It never really took off as a flavour in Western cooking, though. The taste of black tea in sweet dishes and baked goods can be hard to capture: it can either come through as bitter, or not at all.

The length of steeping time affects not just the strength of the taste of tea, but also the breadth and complexity of the taste.

You can extract different flavours from tea by putting it in a sieve, setting up five cups, and pouring 100 ml (about 3 oz) of boiling water through the tea in the sieve into each cup, one after the other, taking 30 seconds for each pour.

Each cup when tasted should reveal different tastes such as below.

At the end of the procedure, combine all the cups together in a large enough cup to hold them, and taste. A more well-rounded and complex taste should come through.

Tea drinking originated in China thousands of years ago. There are many legends that try to explain how. By mid 700 AD, the habit of tea drinking had caught on in Japan.

Dutch traders acquired a small amount of tea in 1610 from Japanese on Hirado island, and brought it back to Holland, where it was treated as a “health food” at first. A doctor, Cornelius Drecker, recommended drinking 40 to 100 cups a day.

Tea became fashionable in Holland and in France before it did in England. (Later, coffee would replace tea as being more popular in France.) The Dutch who were living in New York in the 1650s were also very fond of tea.

Tea samples first reached England in the mid 1650s. The Sultaness-Head coffee house in London advertised in 1658, “That excellent, and by all Physicians approved, China drink, called by the Chineans, Tcha, by other nations Tay, alias Tee.”

Charles II (who had grown up in Holland) married Catherine of Braganza from Portugal in 1662. She was a huge tea drinker, and the two made tea popular with the English nobility.

Thomas Twining started business in 1706. In 1715, his most expensive tea was “Finest Hyson”, selling for 36 shillings a pound.

Tea was drunk at breakfast, or after dinner, in small shallow handle-less bowls at first. Apparently the Duchess of Bedford (1788 to 1861) started the afternoon tea custom, and it was picked up by other hostesses.

The East India Company had a monopoly on the tea trade until 1833. Tea seeds were closely guarded in China, to protect their trade, but various people managed to sneak seeds out, experiment with their cultivation, and by the 1880s Tea plantations were prospering in India and other parts of Asia. The base of John Jacob Astor’s fortune was in tea trading.

“In most households [in nineteenth century Britain], after the tea had been made, the leaves were rinsed, dried and sprinkled on the carpets before sweeping, to help collect the dust. Once this had been done, some charwomen sold the leaves to unscrupulous dealers who mixed them with new tea leaves, selling the tea at bargain prices. It was these very women and their kind who were most likely to purchase the lowest-priced tea, and who were drinking what they had lately swept up.” — Flanders, Judith. The Victorian City. London: Atlantic Books. 2012., talking about the 1850s to 1860s. Page 148

In 1908, Thomas Sullivan of New York developed the concept of tea in a bag. He was sending small samples to restaurants, and realized that in some restaurant kitchens they were brewing the tea right in the bags. Tea bags remained an expensive novelty in Britain until after the Second World War.

The first written mention of adding milk to tea was by Marie de Rabutin-Chantal (the Marequise de Seven) in 1680.

The Chinese court officials authorized to trade tea got called “mandarins” because the Portuguese word “to order” was “mandar”.

In England, the upper class always poured tea into their cup first before pouring milk in. It was the lower class types who poured the milk in first and then the tea.

Wilson, Bee. The Kitchen Thinker: Cooking with tea: Why, when we drink plenty of it, haven’t we traditionally cooked with tea? London: Daily Telegraph. 24 January 2011.