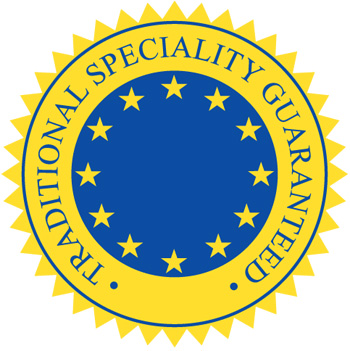 It is the most lenient of EU food designations because it doesn’t restrict a food item to a geographical area, as the other designations do. Rather, the emphasis is on the product being made with “traditional” ingredients, or techniques, rather than being on the place where it is made.

An example is Serrano ham: it used to be made only up in mountainous areas, but now is made throughout Spain.

The classification was first legally defined 14 July 1992 in Council Regulation 2081/92 (EEC) : “‘Traditional’ means proven usage on the Community market for a time period showing transmission between generations; this time period should be the one generally ascribed to one human generation, at least 25 years.”

An updated definition was published on 20 March 2006 in Council Regulation (EC) No 509/2006 : “The introduction of the designation TSG boosts farmers’ revenues and maintains the population in less favoured or remote areas by promoting the rural economy. It also increases the market value of the products of economic operators, by guaranteeing that they are distinguishable from other similar products or foodstuffs. In addition, thanks to the introduction of this designation, consumers will able be to make more informed choices on the basis of clear information on the specific characteristics of the products they buy.”