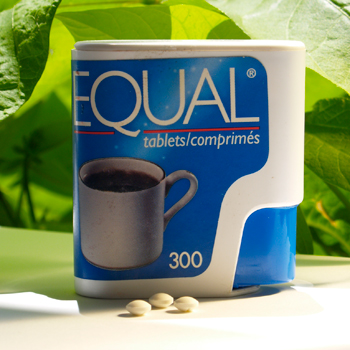 Aspartame
© Denzil GreenAspartame is an artificial sweeter that is 180 times sweeter than sugar. It loses its sweetness, however, when exposed to heat in baking or cooking, or when mixed with an acid.

It is sold as a white crystal powder that has no smell and no aftertaste.

It is made from two amino acids, L-aspartic acid and L-phenylalanine. Both are natural amino acids, though in nature they are never together.

Aspartame is sold commercially under brand names such as NutraSweet, Equal, Spoonful, and Equal-Measure.

It is used in diet soft-drinks, and in artificial table and cooking sweeteners.

The FDA did its first study in 1981. Their reports list what complaints people have reported to them, but then the reports go on to examine the submissions made, and find that there is no scientific or actual documented reason to associate the complaints with Aspartame.

Both the FDA and the Centers for Disease Control (CDC) have reviewed all the complaints received by them, and have never been able to substantiate them. The FDA says that it found no “reasonable evidence of possible public health harm” and “no consistent or unique patterns of symptoms reported with respect to aspartame that can be causally linked to its use.”

Those who believed that there were demons in aspartame challenged the way the FDA reached their findings, so the General Accounting Office of the United States investigated the methodology, and reported in 1987 that the FDA were correct.

But like medieval reports of witches in wells or beliefs that crossing a black-cat’s path is bad for you, these food stories refuse to go away: people just want to believe them. Aspartame is blamed for causing everything from headaches to lupus to multiple sclerosis to pilots having grand mal seizures in airplane cockpits and planes falling out of the sky like hail.

Conspiracy theories abound of whitewashes, payments and bribes. Some of the stories assert that the Searle Company, who developed aspartame originally, found cancer tumours growing in test animals, but then operated on the test animals to remove the cancer to falsify the studies.

The American conclusions have been supported by Health Canada, the Scientific Committee on Food of the European Commission, and the Food Standards Agency (FSA) in the United Kingdom. For the record, the Multiple Sclerosis Society of America, and the Lupus Foundation of America, also agree with the FDA.

But because the belief that aspartame is bad continues and reports based on that belief still pour in, the FDA still has to continue to investigate.

The one issue noted that can occur concerns people living with a pre-existing rare genetically inherited birth defect known as “phenylketonuria”, who are sensitive to an amino acid called “phenylalanine”:

“Phenylalanine is found in most protein-containing foods such as milk, eggs, cheese, nuts, soybeans, chicken, beef, pork, beans and fish.” [1]How to Create a PKU-Friendly Diet. Academy of Nutrition and Dietetics. 24 April 2017. Accessed April 2021 at https://www.eatright.org/health/allergies-and-intolerances/food-intolerances-and-sensitivities/how-to-create-a-pku-friendly-diet

This amino acid is also found in the non-caloric sweetener known as “aspartame”.

The US Food and Drug Administration says:

“People with a rare hereditary disease known as phenylketonuria (PKU) have a difficult time metabolizing phenylalanine, a component of aspartame, and should control their intake of phenylalanine from all sources, including aspartame. Labels of aspartame-containing foods and beverages must include a statement that informs individuals with PKU that the product contains phenylalanine.” [2]US Food and Drug Administration. Additional Information about High-Intensity Sweeteners Permitted for Use in Food in the United States. Accessed April 2021 at https://www.fda.gov/food/food-additives-petitions/additional-information-about-high-intensity-sweeteners-permitted-use-food-united-states

People with this condition who are looking for non-nutritive sweeteners will probably want to consider using a sweetener other than aspartame.

Aspartame was discovered by James Schlatter, a chemist working for the G.D. Searle Company, in 1965 while he was testing an anti-ulcer drug in America.

It was first allowed in dry foods on 26 July 1974, but then two people, a Dr John W. Olney (department of Psychiatry, School of Medicine, Washington University) and a lawyer attorney James Turner filed objections in August that caused the FDA to put approval on hold on 5 December 1974.

It was finally allowed in dry goods in 1981, and in soft drinks in July 1983. In 1992, the FDA gave approval for its use in cereals and puddings. In 1993, approval came to extend its use to candies, fruit juices, frostings, toppings, etc.

Since 1985, The NutraSweet Company has been a subsidiary of Monsanto.