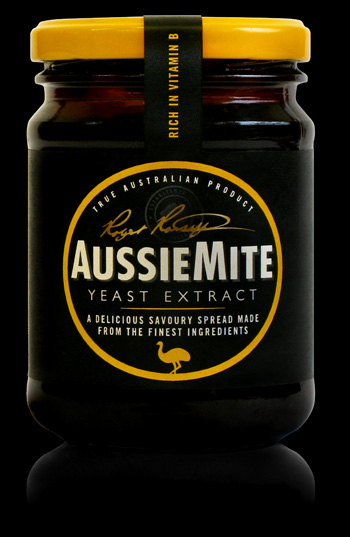 Aussie Mite is an Australian yeast spread, made by All Natural Foods of Stirling, South Australia.

Aussie Mite is sold in tall, sleek, dark footed jars with a bright yellow lid. The round, black label has white lettering on it that says “True Australian Product” and “Yeast Extract”, with the signature of Roger Ramsey on it in gold. The label is bordered in bright yellow, and features an iconic emu of the same colour.

Aussie Mite is rich in Vitamin B. No animal products. GM and gluten free.

Aussie Mite was launched in Australian supermarkets in 2000 by Roger John Ramsey. He wanted to see an Australian-owned yeast spread on Australian grocery store shelves. (The yeast-spread called “Vegemite” had been owned by the American company Kraft since 1935.)

A request to trademark the name “Aussie Mite” was lodged by Ramsey with IP Australia on 7 May 2001. Dick Smith (who planned to make Ozemite yeast spread) opposed him on 9 October 2003 [Ed: Ramsey had earlier opposed Smith’s efforts in March 2002.] On 27 September 2006, a Trade Marks Hearing Officer, T.E Williams, dismissed Dick Smith’s opposition. He allowed Ramsey’s registration request to proceed, ordering Smith to pay Ramsey’s legal costs. [1] It appears that some appeals continued, but ultimately ended in February of 2007, as per IP Australia’s history for number 874833. [2]

His daughter Elise Ramsey now helps to manage the company (current as of 2010.)

Aussie Mite was first sold in a clear glass jar with a white metal lid. The jar had a yellow label on it with a green outline of Australia, with white lettering that said “Concentrated Yeast and Vegetable Extract.”

[1] TRADE MARKS ACT 1995. DECISION OF A DELEGATE OF THE REGISTRAR OF TRADE MARKS, WITH REASONS. Re: Opposition by DICK SMITH INVESTMENTS PTY LTD to registration of trade mark application 874833(30) – AUSSIE MITE – filed in the name of ROGER JOHN RAMSEY.