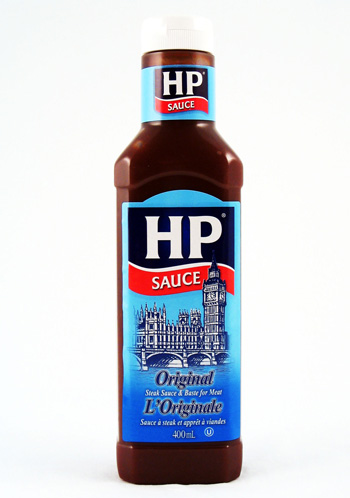 English Brown sauce is a commercial, bottled sauce. It is a thick, brown sauce that is like a slightly sweet, tangy steak sauce.

It is made from apples, prunes, onions, malt vinegar, and seasonings.

It is particularly popular with fried meats — either bacon or ham for breakfast, or fried meats for suppers.

In North America, practically the only brand of brown sauce sold is HP, so it is just referred to as “HP Sauce.” In the UK, however, there are many other brand names, such as Daddies, and all the supermarkets put out their own brand of brown sauce. Consequently, there it is more likely to be called “brown sauce.” This also handily contrasts it nicely with the other bottled table sauce that is omnipresent in England, which is “red sauce” — as in, tomato ketchup.