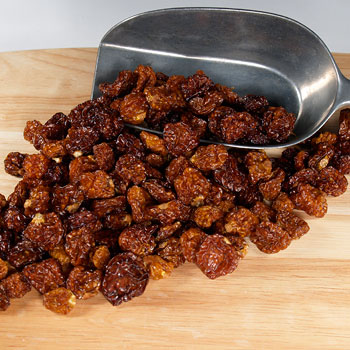 The plants will grow anywhere, and are very productive bearers.

The berries inside the husks are small, round fruit, about the size of marbles or cherries. They have smooth, waxy skin that ripens from green to orange or yellow. Inside, the fruit is sweet and juicy, with many small yellow seeds. Sometimes some berries may have a slightly bitter aftertaste, which plant breeders are trying to breed out. The berries must be harvested in the fall before any frost: frost makes them go mooshy and horrible.

They are shipped to market with lanterns intact to help them ship better. The fruit inside can sometimes be sticky, but that is fine. Occasionally, you find a bad berry inside. Sometimes, a berry may be covered with a black mould like soot — this can be washed off and the berry is fine, though it’s an unpleasant surprise when you first open the husk.

These berries are not actually related to gooseberries at all. There is a movement to rename them to Goldenberries, so watch out for them under that name. Look for them under names such as Inca Berries when dried.

You can eat Cape Gooseberries fresh, or cook with them. They are very high in pectin, so high that in making jams or jellies from them, not only should you not need to add any pectin, but that overcooking the mixtures can cause your preserve to become too stiff when it sets.

Do not eat any other part of the plant other than the ripe berry. Not that the husk, stem or leaves look so appealing, nor should you need any warning about eating dried husks or dead leaves, but for the record they can be toxic. Do not eat unripe berries. Green berries are unripe; discard them. There are reports that there may be toxic glucosides in the fruit when it is unripe, which some people are particularly sensitive to. That aside, the green berries can be an “emetic” (something that makes you want to vomit.)

Good source of vitamins A and C, thiamine, niacin, and vitamin B12

Cape Gooseberries will continue to ripen after being picked, particularly in a windowsill. Don’t remove the husk until ready to use them.

Under commercial ventilation, with the husks intact and the fruit just slightly immature, they can be stored up to 6 months. However, as consumers, we can keep them for up to 3 days in our refrigerators.

Cape Gooseberries can also be dried.

Cape Gooseberries are native to Peru or Brazil. They were introduced into England in 1774, and into the Cape of Good Hope, Africa by 1807. Hawaii before 1825. From the Cape of Good Hope, they were introduced into Australia. The Australians are the ones who named them Cape Gooseberries. Most sold in the UK currently (2004) actually come from Columbia.

The “Physalis” part of its scientific name comes from the Greek word, “phusallis”, meaning “bladder”, alluding to the husk the fruit grows inside of.