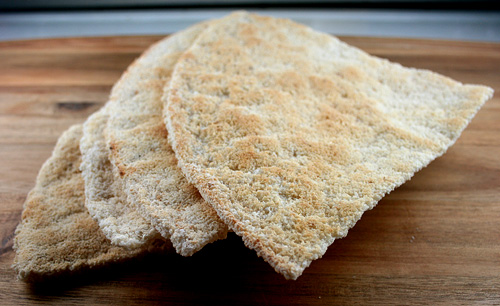 Cassava (aka Casabe) Bread is a flat bread, as hard and thin as a cracker, made from cassava flour.

The flour comes from the bitter (not the sweet) type of cassava roots.

To make cassava bread, the cassava is grated, all the toxic juice squeezed out, then dried into a flour, and sifted.

The flour is spread over a hot griddle to form a large round circle, then flattened and lightly pressed together with a tool that looks like a trowel. It’s flipped to cook the other side, then removed from the griddle, and cut into smaller pieces

You can buy it already made in stores. Popular brands include La Estrella, Goya and Caridom.

Cassava bread will store a long time; insects aren’t interested in it. Store in a tightly-sealed container so that it won’t go stale from moisture and air.

Cassava bread is a traditional bread made by the Arawak Indians in the Caribbean and in South America; it predates European contact by many centuries.

This web site generates income from affiliated links and ads at no cost to you to fund continued research · Information on this site is Copyright © 2021· Feel free to cite correctly, but copying whole pages for your website is content theft and will be DCMA'd.
Tagged With: Flat Breads