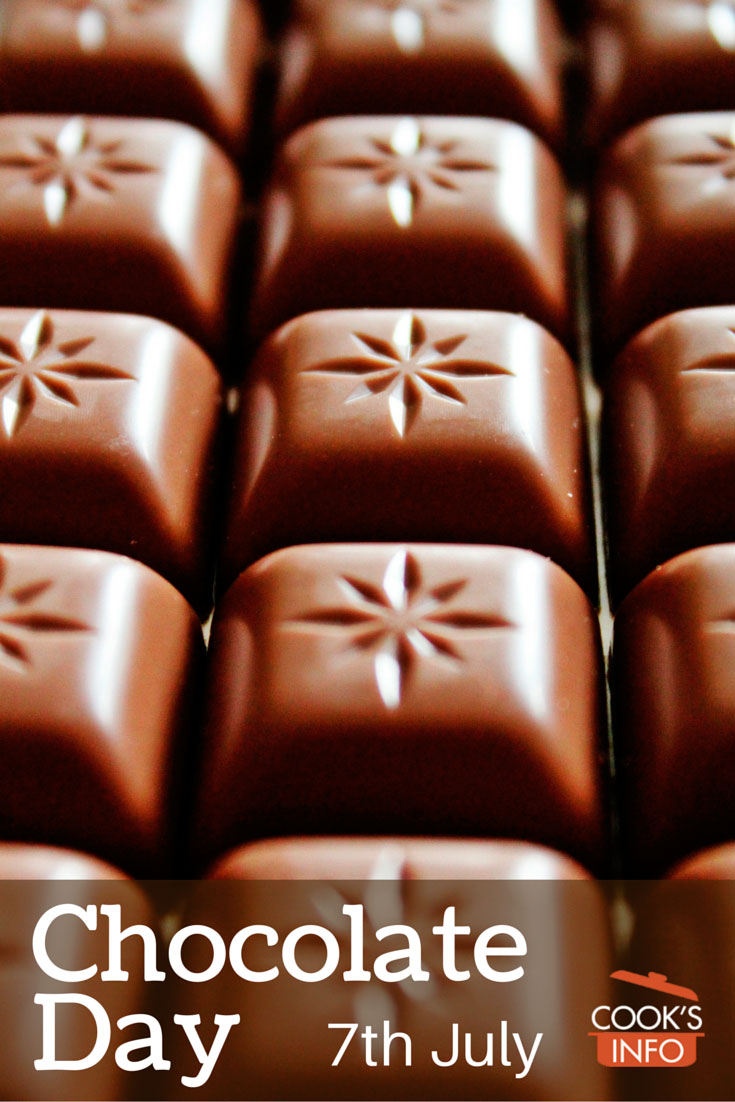 The 7th of July is Chocolate Day.

Chocolate Day is a good day to be adventurous, and try a type of chocolate you’ve never tried before. (Don’t forget to have your favourite on hand as well, though, as backup, just in case you don’t like the different kind that you picked — you wouldn’t want your only memories of today to be a disappointment.)

Some people put Chocolate Day on February the 14th, which makes no sense, because Valentine’s Day has a pretty tight grip on that date, and even though chocolate is associated with Valentine’s Day, there’s an equal number of people who celebrate it with a bottle of gin and Patsy Cline music.

Others put it as the 28th of December which, being in the midst of the holidays when chocolate is already everywhere you turn, so what would be special about it on that day?

The 13th of September is another day suggested, because that’s Milton Hershey’s birthday. But again, that’s another day already associated with a “larger theme”, and besides, despite all the other suggestions for when Chocolate Day should be, it appears that if organizations, towns or individuals are going to recognize Chocolate Day, most of them seem to be going with today, 7th July.

In England, at least as reported up to 2004, most chocolate sold is sold on the 1st weekend of February. It’s the weekend when New Year’s resolutions start flying out the windows as stores load up with displays of chocolate for Valentine’s Day and people want to beat the mid-winter blues. In the UK, the supermarket chain Tesco’s marks the 1st of February off in their daily-diaries as “Chocolate Day.”

Why not make it into a Chocolate Holiday long weekend? Besides, for real chocolate lovers, just one day isn’t enough, anyway.

If it’s hot where you are today, the trick might be trying to keep your chocolate from melting. So, how about chocolate ice cream, or a chocolate milk shake?

“You don’t like chocolate. You don’t even love chocolate. Chocolate is something you have an affair with.” — Geneen Roth

“What you see before you, my friend, is the result of a lifetime of chocolate.” — Katherine Hepburn

“More than 70% of people would reveal their computer password in exchange for a bar of chocolate, a survey has found… ” BBC News. Passwords revealed by sweet deal. 20 April 2004.