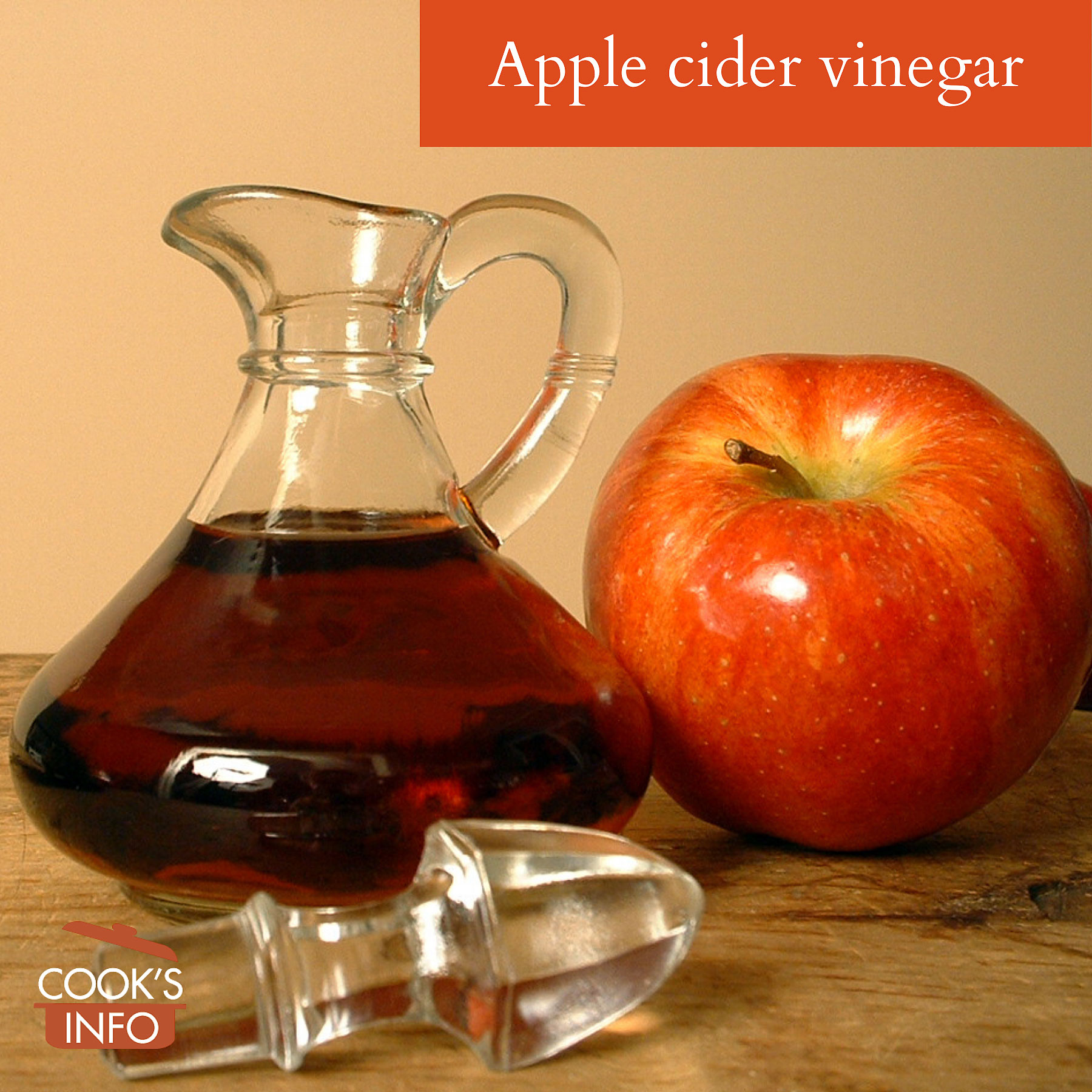 It has a real tang, which is a bit much for delicate vinaigrettes or sauces, but it holds its own well against stronger tastes in chutneys and marinades.

It is the most popular vinegar in the United States, and ties with malted vinegar in popularity in Canada particularly for use on chips (aka French Fries.) It is also popular in other English-speaking countries such as the UK, Australia, New Zealand, etc.

Cider vinegar can be made from apple cider, or from the “pomace” of apples: what’s left of an apple after it has been pressed or put through a spin extraction process to make apple juice or cider.

In some jurisdictions, what is sold may be spirit vinegar that has apple flavouring added to it.

In Canada, by law, cider vinegar must be made from apple; it cannot be just vinegar that has had apple flavour added to it. [1]”B.19.006. [S]. Cider vinegar or apple vinegar shall be vinegar made from the liquid expressed from whole apples, apple parts or apple culls and may contain caramel.” — Canada. Food and Drug Regulations Consolidation. C.R.C., c. 870. Division 19. 7 November 2014. Page 755. 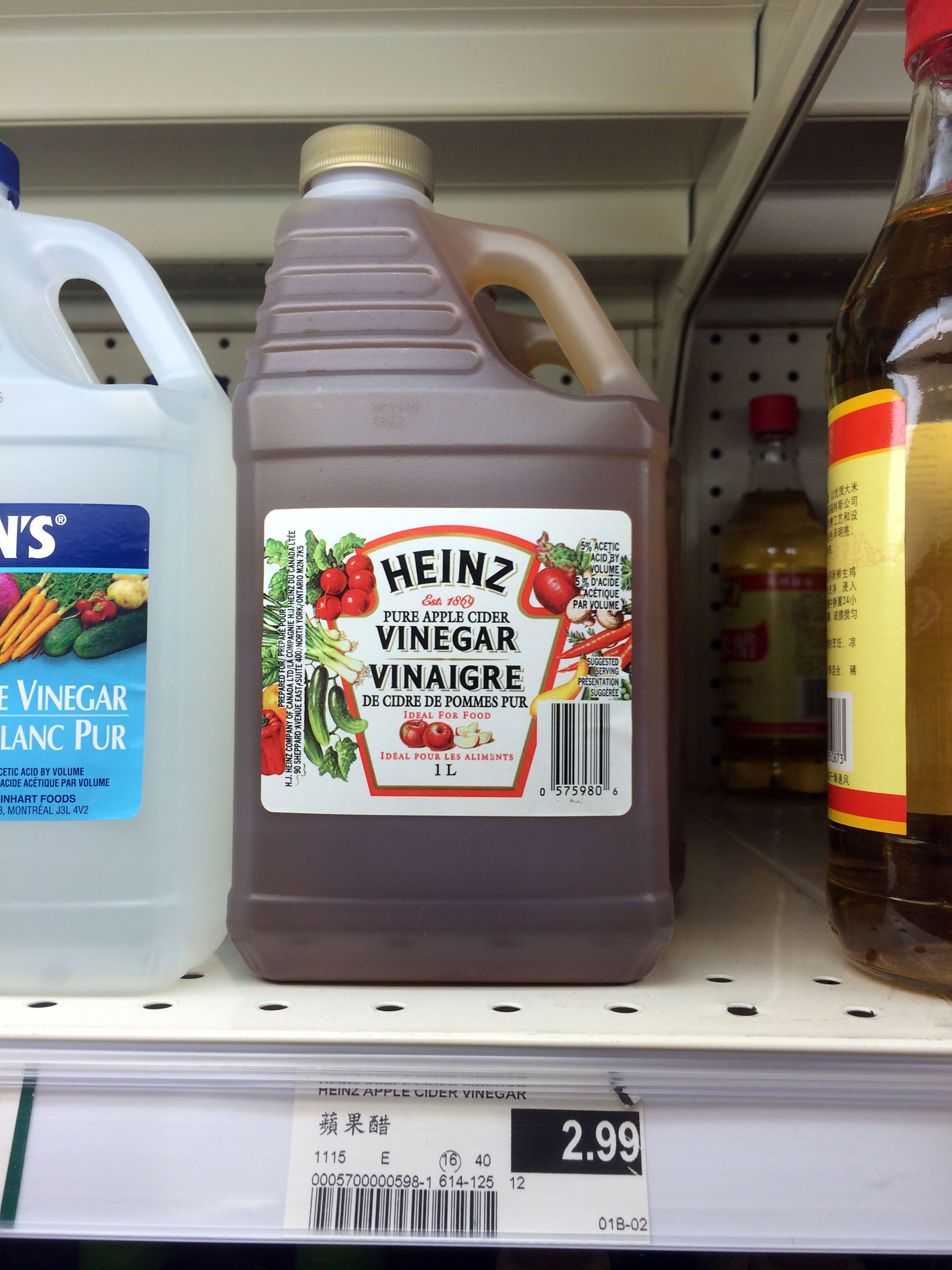 Cider vinegar gives a nice flavour in pickling, but owing to its colour may darken light fruit or vegetables a bit (but the coloration does not affect the flavour.) For canning purposes, be sure it is certified 5% acetic acid or higher. Use in chutneys, marinades, pickled onions, stronger salad dressings, etc.

Claims that apple cider vinegar has any medicinal benefits are just that — claims, and anecdotes, with no scientific evidence to back them. In other words, myth. Fake news. The American Food and Drug Administration (FDA) allows no health or medicinal benefit claims in relation to cider vinegar. See the case of what happened to “Jogging in a Jug”, an apple cider beverage which did make those claims.

There are various magic ways, reputedly, in which cider vinegar is supposed to help you. The claims include that it normalizes your body’s acid/alkaline balance; that it’s rich in minerals, enzymes and vitamins; that the pectin in it helps your bowels; that phosphorus in it prevents bad bacteria from forming in your body; that unpasteurized, raw cider vinegar has in it a magic “vitalism”. [3]Vitalism is reputed to be: “a vital life force energy that differs from the laws of physics, chemistry or biology and cannot be seen, detected or measured by science… Today’s practitioners often refer to it as a type of bioenergy field or holistic essence… Vitalism is also conferred to our foods and environment, as certain whole, natural foods are believed to have more vital life energy, live enzymes and an ability to heal and prevent disease…. like other beliefs surrounding vitalism, they “work” primarily through placebo and nocebo effects.” Szwarc, Sandy. Junkfood Science: The essence of wellness. 10 April 2007. Retrieved November 2012 from http://junkfoodscience.blogspot.ca/2007/04/essence-of-wellness.html

The facts are that your stomach is so acidic, no food can change its acidity. In fact, your body operates within a narrow pH range that you would not even want anything to be affecting it. “Dietary modification cannot change the acidity of any part of your body except your urine. Your bloodstream and organs control acidity in a very narrow range. Anything that changed acidity in your body would make you very sick and could even kill you.” [4]Dr. Gabe Mirkin, M.D. Georgetown University School of Medicine. Acid/Alkaline Theory of Disease Is Nonsense. Retrieved November 2012 from http://www.quackwatch.org/01QuackeryRelatedTopics/DSH/coral2.html

Cider vinegar is not rich in minerals, enzymes and vitamins; in fact, it’s quite the opposite. A look at its components shows you it is quite empty of anything that could be beneficial in that regard:

Cider vinegar contains no pectin; it contains a negligible amount of phosphorus (1 mg); and vitalism is essentially a spiritual belief that food has some kind of undetectable spiritual energy to it that you only know is there because someone said they detected it.

Despite this, there is a big cult following now around the reputed health benefits of raw, unprocessed (i.e. non-distilled) cider vinegar, often in the form of pills. But it is myth and junk science.

There is no conspiracy by the American Food and Drug Administration colluding with drug companies to deprive people of an inexpensive, natural remedy. The FDA is just doing its job of preventing people from selling you snake oil. There have been multiple controlled clinical case studies that show no benefit, at all. Anecdotes about someone’s grandmother taking apple cider vinegar, along with claims and testimonials, are what is called “experiential evidence”, which is often what junk science is based on.

Sipping cider vinegar (or any vinegar) undiluted can have the cumulative effect of damaging the enamel on your teeth. [6]Willershausen I, Weyer V, Schulte D, Lampe F, Buhre S, Willershausen B. In vitro study on dental erosion caused by different vinegar varieties using an electron microprobe. Clin Lab. 2014;60(5):783-90. doi: 10.7754/clin.lab.2013.130528. PMID: 24839821. Once the enamel is destroyed, your body has no way to replace it. Dentists strongly advise against its straight-up consumption for this reason, and advise instead consuming it normally, mixed into or sprinkled onto other ingredients.

The Egyptians made apple cider vinegar.

Some think the idea of the health benefits of apple cider vinegar originated with a Dr DeForest Clinton Jarvis (March 15, 1881 – August 18, 1966) of Vermont. He popularized his ideas in his 1958 book, “Folk Medicine: A Vermont Doctor’s Guide to Good Health.” His ideas on cider vinegar in particular were denounced as quackery even at the time.

You may see repeated over and over on the Internet the following claim:

“Apple Cider Vinegar has been highly regarded throughout history. In 400 B.C. the great Hippocrates, Father of Medicine, used it for its amazing health qualities.”

It appears to have originated with the well-known manufacturer of one brand of apple cider vinegar, and simply been copied out to various “health sites” from there.

Nothing, though, could be further than the truth.

For starters, the reality is that though Hippocrates was a famous doctor in his time (probably around 430 BC) [7]King, Helen. Hippocrates didn’t write the oath, so why is he the father of medicine? The Conversation. 2 October 2014. Accessed May 2020 at https://theconversation.com/hippocrates-didnt-write-the-oath-so-why-is-he-the-father-of-medicine-32334, it is very unlikely that any of the writings now attributed to him were in fact written by him:

“The reality is that not just the [Hippocratic] Oath, but the 60 or so other ancient Greek treatises on medicine that we call “the Hippocratic corpus”, are all anonymous. They were written over many centuries in different Greek dialects. They also have different ideas about the body and healing. So Classics scholars today are clear that they can’t all have been written by one man.” [8]Ibid.

Because he was such a famous doctor, many medical things simply got attached to his name for the marketing value, in the same way today using the names “Cordon Bleu” or “Escoffier” in the food world can boost your brand.

It’s for this reason that the collection of work attributed to Hippocrates is now known as the “Hippocratic corpus” or the “Hippocratic texts.” These are all online free, for easy quick searching at the Perseus Collection.

In those Hippocratic texts, there is literally no mention of apple cider vinegar, or cider vinegar, or apple vinegar. The texts do mention “vinegar”, but just in general terms. The few times anything is specified about the vinegar, it is to say “strong vinegar”, or “white vinegar.” For instance, “use the strongest white vinegar” (Hippocrates, “On Ulcers”, Part 5), “Boiling the shavings of lotus with vinegar (the vinegar should be white)” (Part 6) and “The strongest vinegar of a white color…” (part 7).

Here is what is said about apples in the Hippocratic texts:

“Sweet apples are indigestible, but acid apples when ripe are less so…. Apple juice stops vomiting and promotes urine. The smell too of apples is good for vomiting. Wild apples are astringent, but when cooked they pass more easily by stool. For orthopnea (shortness of breath when lying flat) their juice, and the apples themselves when a draught is made of them are beneficial.” (On Regimen (2.55))

Notice that what is mentioned is apple juice.

CooksInfo has not been able to find any information showing that the ancient Greeks even knew about or made apple cider vinegar.

Hippocratic apples: finding out more. Module 2.3, Health and Well-being in the Ancient World. Open University. Accessed May 2020 at https://www.open.edu/openlearn/ocw/mod/oucontent/view.php?id=97279&section=_unit3.2.3 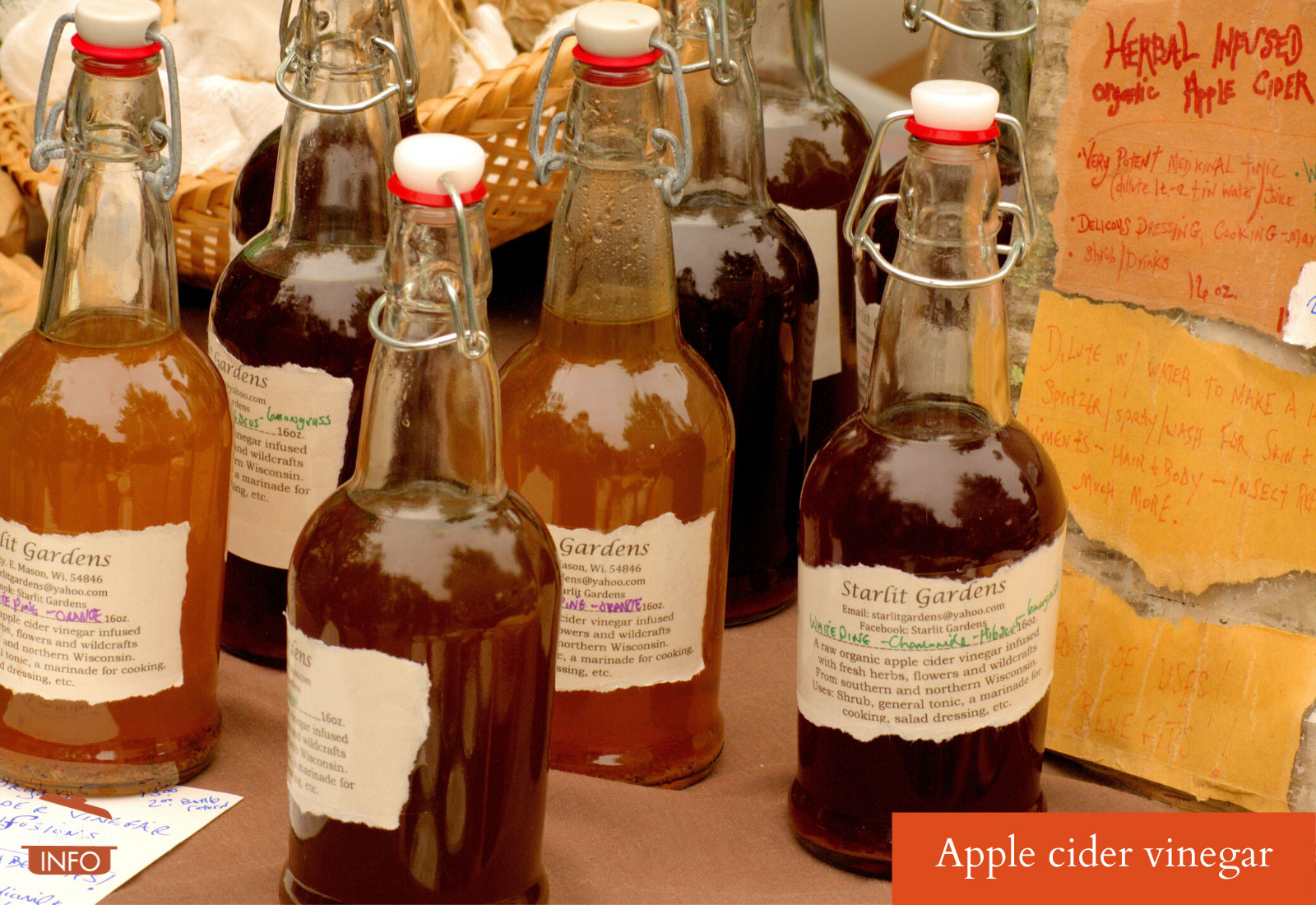 This web site generates income from affiliated links and ads at no cost to you to fund continued research · Information on this site is Copyright © 2023· Feel free to cite correctly, but copying whole pages for your website is content theft and will be DCMA'd.
Tagged With: American Food, Ancient Egypt, British Food