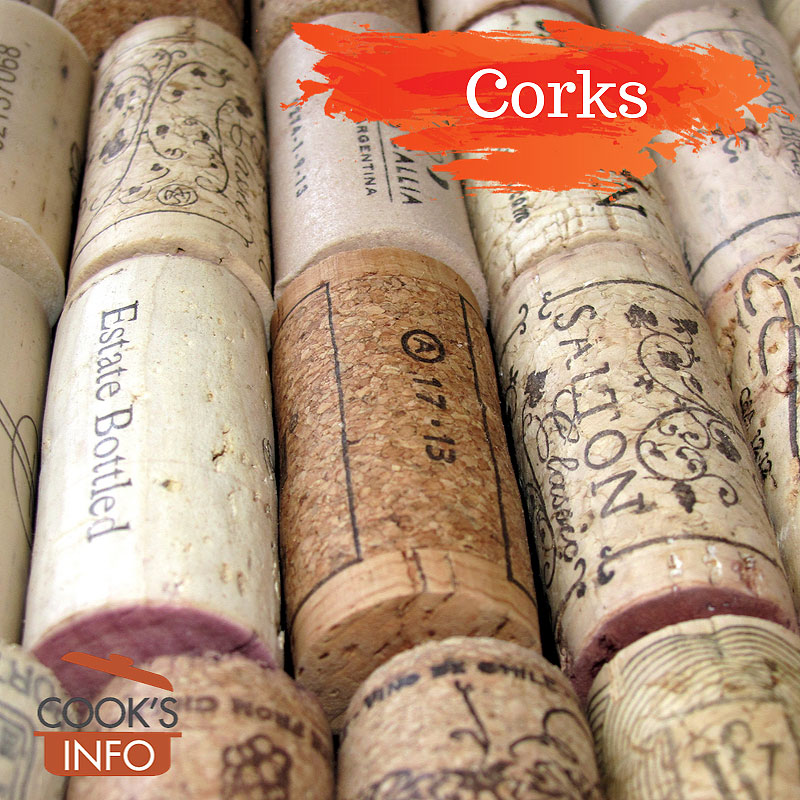 A cork is a bottle stopper, generally used for wine bottles to stop the wine in them from oxidizing.

The material known as “cork” comes from the cork tree, aka “Quercus tuber.” Native to Spain, the tree is related to oak trees.

Actual cork interacts with the wine, influencing the taste. This is usually good, but can it can also be bad: real corks can contain microbes that contribute to a “corked” taste, called “TCA taint”, short for “Trichloroanisole taint.”

Portugal produces 50% of the cork in the world, Spain 32%, Italy 6%. Harvest of the bark starts when the trees are 25 years old, and is repeated every 9 years from then on. The first two harvests from a tree are okay; the rest are better after that. A tree can live for up to 200 years.

Cork tree cultivation is actually sustainable, and in fact able to thrive. If corks were not being used for wine, the cork tree forests would likely be razed and the land used for something else. Cork bulletin boards and floor tiles are a by-product of the cork production, being made from the shavings. Recycled corks are used for bulletin boards, floor tiles, the insides of base balls, etc.

Plastic wine bottle stoppers can be and are sterilized, so no TCA taint of the wine can occur from their use. But, the seal is actually not as tight as with real cork, so air can slowly get into the bottle, oxidizing the wine. Consequently, the plastic stoppers (which are dependent on oil production) can’t be used with fine wines that need long aging. Besides, consumers haven’t warmed to them — they are just too hard to use with cork screws.

The feeling at first was that consumers would resist metal screw caps on wine bottles for snob reasons. It appears, though, that that resistance has quickly disappeared.

The caps are lined with inert, medical-grade plastic, similar to what is used in hospitals for intravenous drip bags, etc.

There’s no advantage to storing screw-capped bottles on their sides. Their synthetic liners don’t need contact with moisture to maintain a seal. So, you might as well store them upright to save space, and if any sediment occurs in the bottles during storage, it will conveniently fall to the bottom of the bottle.

Aluminum stoppers for champagne are being trialled (as of 2009) as a replacement for cork. [1]BBC News. Champagne corks on the way out? 17 April 2009. Retrieved August 2010 from http://news.bbc.co.uk/2/hi/europe/8004011.stm [2]”…a concealed crown bottle cap fitted with an aluminum lever. It’s far easier to use than a conventional stopper — no struggling to hold the heavy bottle as you twist, no worrying that you’ll take someone’s eye out with the cork — but it still delivers that satisfying pop upon opening.” Iverson, Jeffrey T. Is the Party Over for the Champagne Cork? Time Magazine. 17 May 2009.

Champagne: cover the bottle with a clean tea-towel, hold the cork through it, and rotate the bottle back and forth to ease the cork out.

Corks were used as stoppers in many other kinds of bottles before they were pressed into service to seal wine bottles.

Wine bottles weren’t sealed with cork stoppers until the early 1700s and it was, believe it or not, the British who were the first to do it.

Crosariol, Beppi. How should I store screw-capped wine bottles? Toronto, Canada: The Globe and Mail. 10 February 2011.

Hitti, Miranda. Protect Your Eyes When Popping the Cork: Doctor Prescribes a Safe Way to Open Champagne So You Don’t Start 2009 in the ER. WebMD Health News. 31 December 2008.