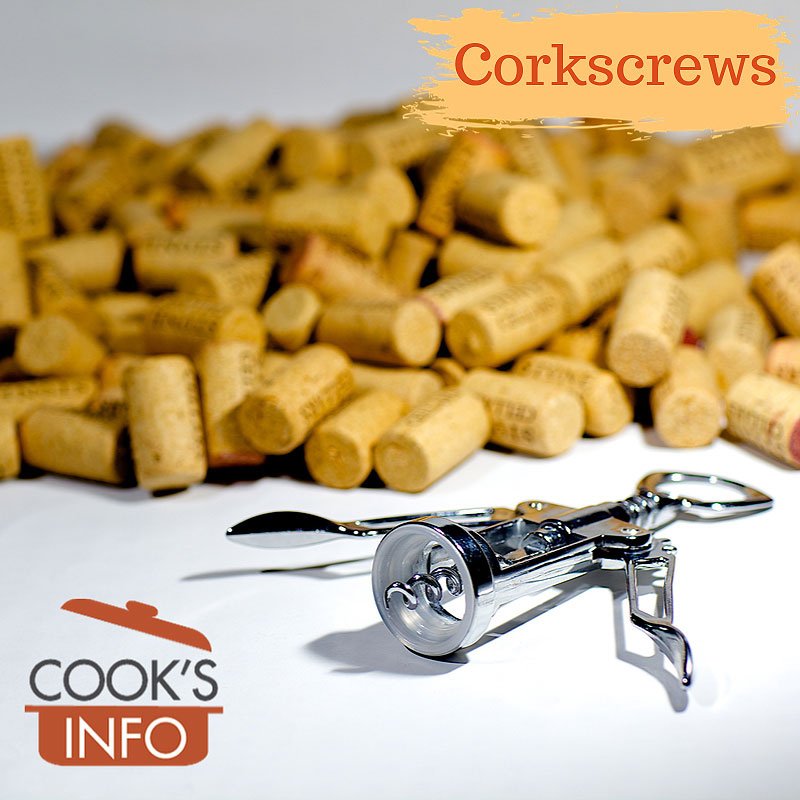 A corkscrew is a device used to open bottles sealed with corks by extracting the corks from them. They are primarily now used on wine bottles. There are many, many different kinds now, as everyone tries to invent a better or a novel one. Most, however, have one thing in common still: a screw at one end, that works its way down into the cork and gripping it, thus providing a means by which the cork can be pulled out. Most have a blade as well for cutting foil; with some the blade is attached, with others it’s a separate device in the box.

Some advise that the best screws are those that look like coiled wire (hollow through their centre), rather than looking like an actual screw or auger (solid throughout.) The diameter of the coil needs to be wide enough so that it will grip the entire cork, not just the centre, and long enough to penetrate the entire depth of the cork.

Some advise to have the tip of the screw sharpened from time to time, because as the screw comes through the bottom of the cork in the bottle, a dull tip may cause small, broken cork bits that can fall out into the space and into the wine.

The screw needs to go right in the dead centre of the cork. If your aim is off, your aim your work will automatically be harder. Consequently, some corkscrews are now designed so that the base of them fits over the mouth of the bottle, so that the screw can only go in at the dead centre. This can be useful when your aim is sure to be off as one or two bottles have been previously opened. 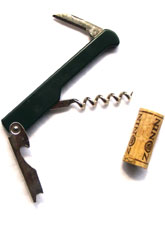 The waiter’s corkscrew looks like a pocket-knife that opens up. It has a notched piece of metal that rests against the mouth of the bottle, to give you leverage as you yank. It is meant to be used standing up, without having to rest the bottle of wine on the table. The screw is hinged and folds out of the handle. It is still the most popular with professionals. The trick is to make sure that you are pulling the cork straight out, not at an angle. They argue that it allows more fine control over the entire process, especially important with decades-old or brittle corks. It was invented by Carl Wienke, of Germany, who received German patent DRP 20815 on 26 May 1882; and British, French and American patents in 1883. He called the “Butler’s Friend” or “Waiter’s Friend.”

Bell type corkscrews have a large handle on top that you turn sideways. Lower on the corkscrew, there’s a bell shape that rests on top of the mouth of the bottle. As you turn, the bell shape holds the bottle down while the screw pulls the cork up. The design was patented in America in 1893 by an Edwin Walker.

A T-Shaped corkscrew consists of a screw and a handle on top at a right-angle to it. The screw is attached to the handle at the handle’s middle. You turn the handle to screw it into the cork, then pull for all you’re work. While it’s the easiest corkscrew for anyone to figure out, it relies solely on brute force — the corkscrew provides no leverage at all. It brings to mind comedic scenes in which people put bottles of wine between their legs, and then yank with both hands in desperation. Some have described them as instruments of torture worthy of the Marquis de Sade.

Some have a concave disk towards the top of the screw, to limit how far the screw can go in, and to press on the cork (once the screw is fully in) to help break any pressure seal to ease the yanking. This design, with the concave disk, was patented in 1795 by a Reverend Samuel Henshall. He put his motto “Obstando Promoves Soho Patent” (meaning “by standing firm one makes advancement”) on them.

This type of corkscrew has two handles: one that you push down, and a second handle that you hold to grip the bottle at the top. The act of pushing down causes the screw to turn into the cork. Then, you raise the handle up, causing the screw to be pulled up, bringing the cork with it. Then you move the corkscrew away from the bottle and push the handle back down, which ejects the cork off the screw.

Some corkscrews, instead of a screw, have two prongs that you insert on either side of the cork. The advantage to them is meant to be that because they don’t chew their way into the cork, you won’t get cork bits in your wine. If you’re not careful with them, however, you can end up pushing the cork further into the bottle, accompanied by gasps of despair by onlookers.

Remove all the foil first from the bottle top, and any wax sealing: overtime, foil and was sealing will speed up your Corkscrew going blunt. Make sure you screw it in absolutely straight, and that the screw is starting at the dead centre of the cork. 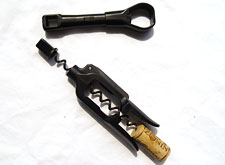 Corkscrews were becoming common by the early 1600s. They were made by blacksmiths. It’s speculated that what inspired a corkscrew was “bulletscrews” (aka “gun wormes”), used to get out bullets that were stuck in the barrel of a gun.

But those early corkscrews weren’t for wine bottles. Before wine was corked, corks were used as stoppers in many other kinds of bottles first. Wine wasn’t put in corked bottles until the early 1700s and it was, believe it or not, the British who were the first to do it.

Almost every design of corkscrew that we have now was invented by the 1880s. One of the earliest patents appears to be that granted on 24 August 1795 to Samuel Henshall, Princes Street, Parish of Christchurch, Middlesex (English Patent No. 2061). The first American patent seems to be one granted on 15 July 1856 to George Blanchard of New York, N.Y. A Canadian patent was issued on 23 January 1893 to a William Addison of Hamilton, Ontario.

The screw parts are often referred to as “worms” by corkscrew collector fans.

This web site generates income from affiliated links and ads at no cost to you to fund continued research · Information on this site is Copyright © 2022· Feel free to cite correctly, but copying whole pages for your website is content theft and will be DCMA'd.
Tagged With: Wine