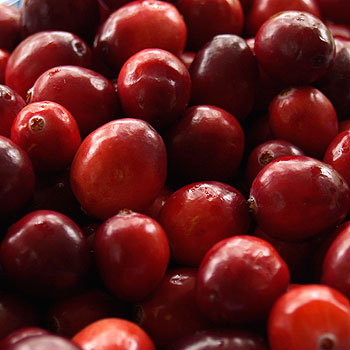 Cranberries are small, round, and hard fruit. If you pop a few raw ones in your mouth and manage to bite through them, you would find that they have major pucker power: they are seriously tart. But you wouldn’t really do that as cranberries are a fruit that really must be cooked to make them soft and that really must have some sweetener of some sort to counteract the tartness at least a bit.

In North America, the big cranberry growing regions are British Columbia, Oregon, Wisconsin, New Jersey and Massachusetts. In the UK, the regions are North Wales, Northern England, and Scotland. In Europe, the variety of cranberries grown (Vaccinium oxycoccos) is just slightly different, in that the berries are a bit smaller.

White cranberries are cranberries harvested early, about a month early before they turn red. They are less tart than mature ones, and so give off a sweeter juice.

Cranberries don’t grow in water, even though that’s how most photos of cranberries in the field show them (that’s just the harvesting stage.) They are grown in bogs, but a bog isn’t full of water, like a swamp: instead, it is ground that consists of stuff like clay, gravel, peat and sand, which absorbs water poorly, so that if there is a sudden downpour, the water will sit on top the ground for some time. Not many plants can grow in bogs, but cranberries can.

Cranberries grow on low trailing vines. A plant needs about three years of growth before it will start producing berries. Harvesting is done in one of two ways, depending on how the berries are going to be sold.

In the “wet harvesting” method, the bog is flooded to a depth of about a foot and a half (45 cm.) A machine with a beater goes through the patch stirring up the water to coax the berries off the plants, without damaging the plants (after all, undamaged Cranberry vines will last a long time: some vines in Cape Cod were planted over 150 years ago.) The berries float on the surface of the water. They are then collected, either by workers with rakes or “booms” that push them into a corner for collection, or by shallow-water boats with what is essentially a vacuum cleaner attached that sucks them up. About 90% of berries are harvested in this way, and these are used commercially in juices and sauces. This wet harvesting method originated in the 1960s.

Before that, you only had the other method, which is now called “dry-harvesting”: walking through the dry fields and, originally, picking them by hand. Over the years, they developed wooden “combs” that you could brush the berries off the plants with, and now they have machines with comb-like conveyor belts that do the job. 10% of the harvest is still done in this way; these are sold as fresh fruit for use in cooking and baking.

Cranberry harvesting happens between Labour Day and Hallowe’en. They are available fresh in bags from September to December. The rest of the year, you can get frozen or processed.

When you are buying cranberries, you want hard, unbruised ones. Most will be a gorgeous red, but don’t fuss if a few aren’t, as the colour can vary from very light red to dark red. They should be hard enough to bounce: soft ones won’t. But chances are you won’t get any soft ones, as part of the selection process during packing involves bouncing them gently, and the non-bouncers don’t make the cut. Soft ones are over-ripe and starting to spoil.

Cranberry juice was the second most popular juice in North America in 2004 (9.5%), with orange juice being still the most popular by far (having close to 35% of the market.)

Dump fresh Cranberries into a colander, sort through them and discard any that have become bruised or soft, as well as any stems. Then rinse under cold water. If a recipe calls for chopping, you can use a food processor: use the pulse action with the chopping blade. If you are making a cranberry sauce, in which the berries are going to be boiled down to a moosh, and the recipe says to chop them anyway, there is actually zero need to chop them and that is a wasted step,

Some will advise you that add a teaspoon of butter or margarine to your cranberries when boiling them will eliminate foam and stop them from boiling over, but if you use a good-sized pot, you won’t get any boil-over problem.

You only need to cook cranberries in a pan until most of them have popped (you can squish the hold-outs with the back of a spoon.) Cooking them further can bring out a bitter taste in the berries.

If you are using frozen cranberries, there is no need to thaw them before cooking with them.

The Cranberry marketing boards are coming up with lots of ways to use Cranberries other than sauce at Thanksgiving and Christms, but here’s a few more:

Store fresh, unwashed cranberries in a plastic bag in the refrigerator for anywhere from 2 to 4 weeks.

After that, freeze. No preparation needed for freezing, just wash, let them dry off, put them in a freezer proof bag and freeze for up to 1 year. No need to thaw before cooking with them.

Store dried cranberries in a sealed plastic container out of the light. They will keep indefinitely.

The Algonquin Indians introduced the first settlers in the New England area to Cranberries. They have since been transplanted to Great Britain and Scandinavia (in the early 1800s for both). Commercial cultivation began in Massachusetts in the 1840s, which still now grows half of the crop in America each year.

The early settlers thought that cranberry blossoms resembled the heads of cranes bending over for a sip. If you have seen pictures of cranberry plants in blossom, they do in fact look like cranes. So, they called them “crane berries”, which of course over time got shortened into the word we now use. By 1680, they were definitely referred to as “cranberries”.