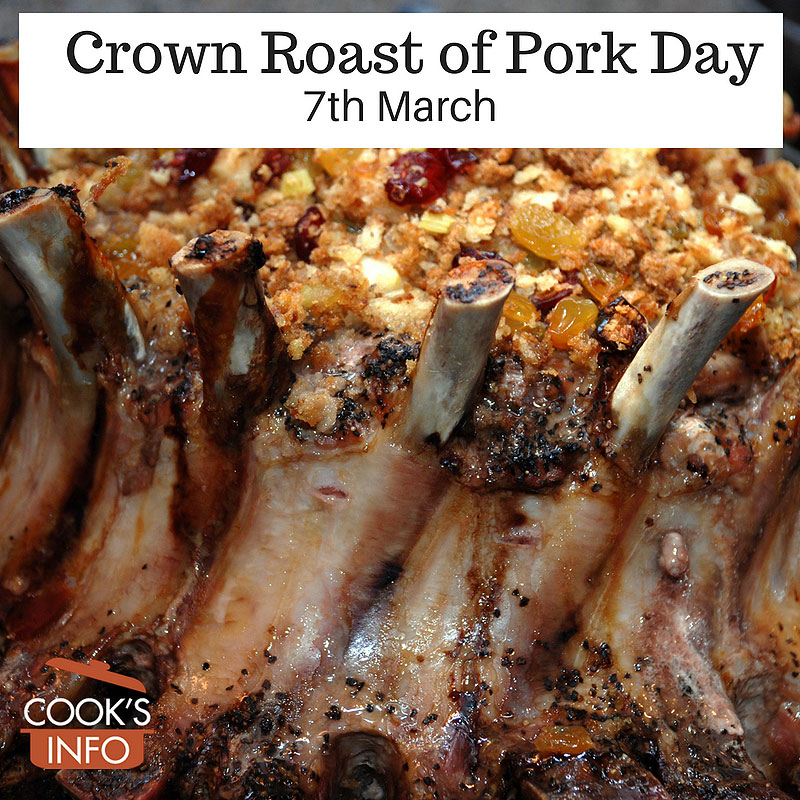 The 7th of March is reputedly the day on which to enjoy a Crown Roast of Pork.

In the Northern Hemisphere, it is still cool enough to do a good roast dinner, and in Australia, the heat of the summer is starting to ease off.

Plus, there’s no competition just now from other holidays to detract from the spectacle of a crown roast.

So why not go all the way, and pick up some of those little curly white paper hats you stick on the bones?

Note that technically, feasting on a spectacular cut of pork on a day in March wouldn’t appear to have any basis in tradition — in the Northern Hemisphere, anyway. You wouldn’t slaughter a pig in March, just before breeding season after having fed it all winter to keep it alive. Slaughtering was all done in the fall. And, by this time of the year, any pork you had preserved from the fall through salting or drying would largely be gone.

That being said, dubious historical authenticity is perhaps no reason not to celebrate one of the most spectacular joints of meat.

And while you’re at it, raise a toast to Alexander Graham Bell, the Scot who invented the telephone in America. He borrowed money from his American father-in-law, and used it to apply for a patent, which he was granted (American patent # 174,465) on this day in 1876 — though he hadn’t quite got the telephone to actually work yet!

The earliest reference to a Crown Roast of Pork Day in March that CooksInfo has found in print archives dates from 2000 in New Hampshire: