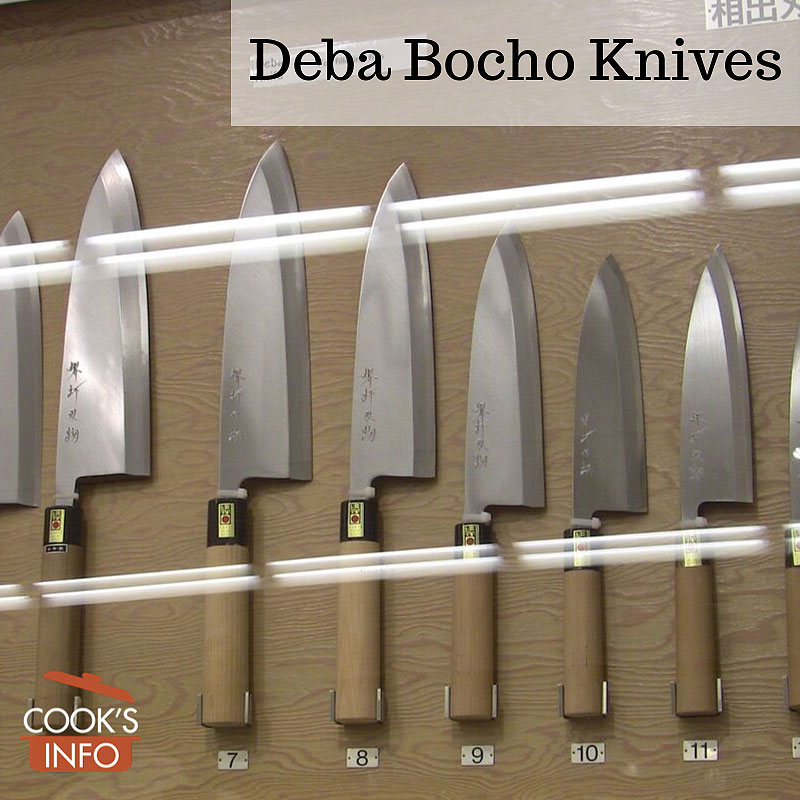 A Deba Bocho knife (Japanese: 出刃) is a Japanese knife that is good for cutting through bone and skin. It can cut meat, fillet fish, and chop through fish bones. This is a knife that you would use to cut fish into large pieces, before switching to a finer knife to make thin sashimi slices.

The knives come in varying lengths, usually from 165 mm (6.5 inches) to 200 mm (7.9 inches) long. [1]Japanese Kitchen Knife Types And Styles. Accessed October 2019 at http://zknives.com/knives/kitchen/misc/usetype/all/index.shtml The blades will be thick, and usually made of high carbon steel. The blades are sharpened on one side only.

The handles are made of wood or bamboo. “Mainly Japanese style handles are used. Although, a few makers do offer various Debas with western type handles as well, those would be Yo-Debas.” [2]Ibid.

Deba Bocho knives can be used for some of the functions that you would use both a cleaver and a chef’s knife for.

The back of the blade can be used to crack crustacean shells or tenderize meat.

Deba Bocho knives appeared sometime between 1688 and 1704. They were used in both restaurants and homes.

Their use in homes declined after the Second World War:

“Then comes the [Second World] War, and we get a little more overhauling. The big thing is that the deba is on the decline in the home kitchen, because of the rise of refrigeration technology and because increasingly it was just easier and cheaper to buy cut fish at the market. The home kitchen may now take up a short yanagiba — a slicing knife — to cut sashimi from store-cut fish slabs. But now the dominant home knife, at least in urban areas, is the santoku or bunkabocho.”  [3]Lehrer, Chris. Some basics on Japanese knife history. Cheftalk.com. 24 October 2009. Accessed October 2019 at https://cheftalk.com/threads/some-basics-on-japanese-knife-history-long.56934/

This web site generates income from affiliated links and ads at no cost to you to fund continued research · Information on this site is Copyright © 2022· Feel free to cite correctly, but copying whole pages for your website is content theft and will be DCMA'd.
Tagged With: Japanese Knives